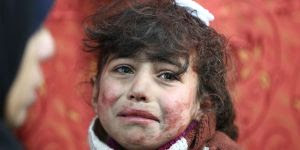 Russian planes are killing children in Syria, just as the world is gearing up to laud Russia at the World. But the UK government is pulling out, and if we get more leaders and teams to say they won’t go to the #cupofshame unless Putin stops the bombings, we could finally stop this hell on earth. Add your name:

For 7 years Syria has been hell on earth.

President Assad's extermination of his own people has been chillingly surgical: he surrounds towns so civilians can't leave, cuts off access to food and medicine, and drops bombs, even chemical weapons, on desperate families. 400,000 have died -- and he's just started in on a new target.

There's one reason why Assad's been able to continue with this destruction: Russia. But now there's one thing Russia may care about more than Syria: saving the World Cup it hosts this year.

The British Prime Minister just announced no Ministers will attend. Australia, Japan and Poland may be next. And there's massive debate in Germany about a boycott. This is huge! If we can get more governments and players to join in opposing the World #Cupofshame, Russia could finally be pushed to stop the bombing.

Add your name to stop this hell on earth

This isn't a boycott -- many countries that respect human rights would be happy to host. And switching the venue could help challenge the infamous corruption of FIFA, the football governing body that is widely rumored to have been bribed by Russia to host the games in the first place!

Russia has vetoed all efforts to stop Syria's carnage, ignored sanctions, and violated UN agreements it signed. But the World Cup finally gives us some leverage. And pressure is building right now -- since the UK just announced they won't go, we can get others to follow.

Famous footballers Lionel Messi and Cristiano Ronaldo have spoken out about the horrors of Syria, and many teams and governments are uncomfortable condoning Russia’s violence at the World Cup. This is a call to them to speak up for basic humanity. If enough of us join, we can do this!

Add your name to stop this hell on earth
We’ve done this before -- when Bahrain brutally cracked down on protesters, Avaaz built a massive campaign, caused a media stir, a legendary driver spoke out, and Formula 1 was cancelled.

Some say we shouldn't mix sports in this horror. But sport is a forum for peace and good. It shouldn't be used to shower accolades on war criminals. Let’s unite to show we won’t cheer in Russian stadiums while their Air Force bombs and starves babies to death in Syria.

For Putin, the World Cup is not about football but global respect (The Spectator)
https://www.spectator.co.uk/2018/01/for-putin-the-world-cup-is-not-about-football-but-global-respect..