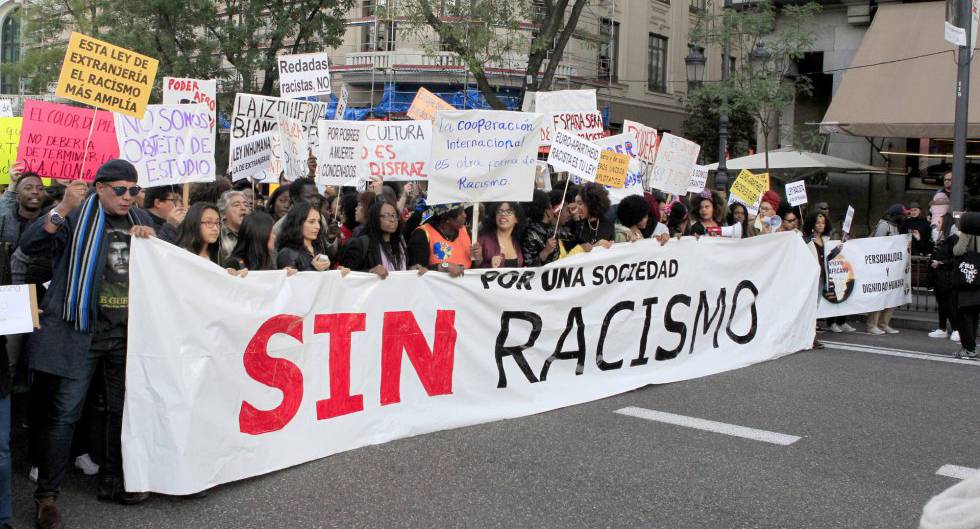 A street march against racism in Madrid in 2017. VÍCTOR LERENA EFE


The Council of Europe is calling on Spain to “urgently” create an independent equality body. Spain and the micro-state of San Marino are the only members of the 47-strong Council that still lack an organization specifically designed to tackle racism.
The report by the Council's European Commission Against Racism and Intolerance (ECRI), which was published on Tuesday, also criticized the lack of measures to integrate migrants, as well as the segregation of Roma children.
While the report acknowledged that there is less hate speech in Spain than in other European countries, it said that the government was not doing enough to address racism. In 2009, the Spanish government created the Council for the Elimination of Racial or Ethnic Discrimination to monitor racist behavior. But this body was never independent – it works within the Ministry of Health – and has taken very little action over the past years. In the report, the Council of Europe said that it “has been left practically inactive” and lacks leadership (its president stepped down in 2014.)


The internet, especially social media, has become one of the main ways to share hate messages and discriminate against others. The Council of Europe recommends that Spain “use its regulatory powers” to ensure internet service providers and social network giants help address the issue.
It also suggests that the government harden civil and administrative legislation against hate messages posted on social networks. Racist and xenophobic acts online have been criminalized in Spain since 2015. The number of cases of inciting hate on the internet have soared from 40 in 2015 to 99 in 2016. This is likely to be much higher given that not all cases appear before the courts, says the report.
Budget cutbacks have also weakened measures against racism. According to the report, there has not been any integration strategy for foreigners in Spain since 2014. The end of the austerity programs should translate into stronger anti-discrimination policies, says the study.
The Council has also called on the Spanish government to make the schooling of Roma children a priority. Although the European Commission has sometimes cited Spain as a leader in social integration, the report by the Council of Europe – which is independent from the European Union – argues that “rehousing measures have contributed to residential and school segregation.” Only 45% of Roma children complete compulsory education, the report notes.
The situation is not much better for other vulnerable communities, like non-EU immigrants. According to the report, 44% of non-EU migrant children are school drop-outs. “Substantial investment in education is needed to ensure Roma children, as well as children from outside of the EU, at least finish compulsory education,” said Jean-Paul Lehners, president of the ant-racist commission of the Council of Europe.
The Council also warns that migrants in Spain were harmed by the health reforms of 2012, and called for the situation to addressed “as soon as possible” so that everyone may fully access all public services – not just emergency services as was established for people without legal status in Spain. The Council of Europe has reported “thousands of cases” in which foreigners were refused public health coverage.
While the report says the use of racist terms in the mainstream Spanish political discourse is rare, it points to a few examples including Javier Maroto, the vice-secretary general of the Popular Party (PP). In 2014, while mayor of Vitoria, he said in a radio interview that Algerian and Moroccan people “only register as residents of the city to claim social benefits.” A PP mayor of Badalona was also criticized for linking insecurity with the arrival of migrants.

“Sensationalism” in the media

Media organizations did not escape the Council’s criticism: “Their tendency to sensationalism and alarmism concerning migration leads to an unjustified focus on the nationality of migrants suspected of criminal activities and a general association of migration and delinquency.”
For the first time, the report analyzed anti-discrimination measures for the LGBT community. The Council of Europe praised the government’s approach but said that hate crimes must be recorded and pursued correctly.
English version by Melissa Kitson.
Publicado por salud equitativa en 4:30