Peter Kagwanja is former Adviser Government of Kenya (2008-2013) and currently the President and Chief Executive of the Africa Policy Institute.
Siddharth Chatterjee is the United Nations Resident Coordinator to Kenya. 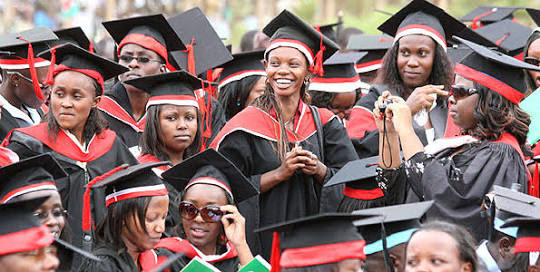 New University graduates in Kenya. Credit: Nation Media
NAIROBI, Kenya, Mar 6 2018 (IPS) - March 8, 2018 International Women’s Day offers another opportunity to reflect on the progress made towards gender equality and women’s political rights.
True, the annual event, which has been observed for over 100 years, is about women’s rights. Every woman and girl dreams of a world in which they are able to achieve their full human potential, have a life free of harmful social norms and stereotypes.
But the Day is also about reflecting on the stories of sexual exploitation and abuse from Hollywood to politics to the aid world, which needs a whole culture shift. It’s about ending a culture of patriarchy, misogyny and treating women as second class citizens.
However, progress towards gender parity is regressing. Women’s rights are being “reduced, restricted and reversed”, noted the UN Secretary-General Mr. Antonio Guterres in 2017.
As a clarion call to action and to catalyse change towards a more gender-equal world, “Press for Progress” is a fitting theme for International Women’s Day 2018.
Today, we live in a world where global gender gap is widening again for the first time in a decade; where men’s earnings are rising faster than women’s, making the feat of gender equality a pipedream.
In view of the current rate of regression, the Global Gender Gap Report (2017) of the World Economic Forum concluded that the world might take 217 years to reach the 50-50 gender parity.
Key to reversing this trend is by enhancing the role of women in leadership. Parity with women, practically half of the world’s total talent pool, is the best driving force for economic growth, wealth creation and poverty eradication. According to the UNDP 2016 Africa Human Development Report, gender inequality costs sub-Saharan Africa on average $US95 billion a year.
Failure to close the gender gap will mean that achieving the UN Sustainable Development Goals (SDGs) and the world we want by 2030 of ‘leaving no one behind’ will be a mission impossible.
In Kenya, gender equality is needed to ensure successful implementation of the ‘big four pillars’ that President Uhuru Kenyatta unveiled last year—including expansion of manufacturing; affordable housing; universal healthcare; and food security.
Kenya has made gains in women political empowerment. The naming of six women the new cabinet and several others to senior positions is a step in the right direction. Notable Kenya’s new female cabinet secretaries hold commanding posts traditionally reserved for males, including the Ministries of Defence, Public Service, Foreign Affairs, Health, Education and Lands.
Further, Kenya’s 2017 election revealed a positive shift in attitudes towards women’s leadership. Women were voted in as Governors in three counties (Kitui, Kirinyaga and Bomet) and three others as Senators (in Uasin Gishu, Nakuru and Isiolo).
Three women—Fatuma Duulo (Isiolo Senator), Naisula Lesuuda (MP for Samburu West) and Sophia Noor (MP for Ijara)—were elected in marginalized areas in Northern Kenya.
However, even as tokenism gives way to meritocracy, Kenya is yet to achieve the level of gender equality in countries like Rwanda, which boasts the highest proportion of women representatives in parliament at 63.8%.
Participation of women in electoral politics is still low. Out of the 10,918 aspirants in 2017, only 1,749 (16 per cent) were female. Those elected are still far below the two-thirds threshold set by the 2010 constitution. Today, only 68 (19%) women are elected to the National Assembly, 18 (27%) to the Senate and 82 (6%) to county assemblies.
Political will is needed to implement Article 81 (b) of the Constitution 2010 that requires the two-thirds gender representation in public offices. Twice Parliament has declined to pass the Bill.
We need to change mind-sets in Kenya and globally to dismantle the architecture of gender inequality as a necessary condition to achieve progress and leave no one behind.
According to the UN Deputy Secretary General, Ms. Amina J Mohammed, “our efforts to leave no one behind will be a test of our common vision, resolve and ingenuity. A whole of government and whole of society approach must become our new norm”.
This requires affirmative action and boldly confronting adverse social norms, practices rooted in patriarchy and misogyny, as well as investing in education of girls, women’s health and political empowerment.