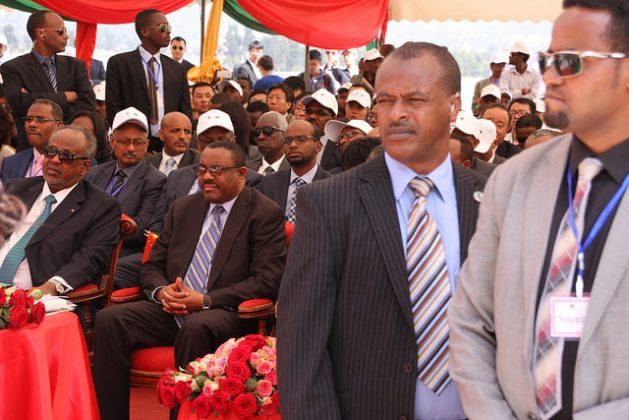 Prime Minister Hailemariam Desalegn (sitting with hands clasped in lap) attending the 2016 opening of the new Addis Ababa-Djibouti railway. Credit: James Jeffrey/IPS
ADDIS ABABA, Mar 9 2018 (IPS) - The dominoes keep falling in Ethiopia, with one of the most significant crashing down.
Just over a month after the Ethiopian government’s surprise decision early January to close a notorious prison and release political prisoners, Prime Minister Hailemariam Desalegn announced on Feb. 15 his shock resignation in another apparent bid to placate the turmoil that’s plagued the country for more than two years.
“It is time for Ethiopians to decide whether they want the former empire that is Ethiopia to be one country or several countries.” --Sandy Wade, a former EU diplomat

He was the first ruler in modern Ethiopian history to step down—previous leaders having been overthrown or dying in office. The day after the announcement, another state of emergency was declared in Ethiopia—a preceding 10-month state of emergency, the first in 25 years, having ended in August 2017—casting further uncertainly over the second most populous country in Africa with one of the continent’s fastest growing economics, a staunch ally of the West in the fight against terrorism, and a country that has previously managed to hold out as a relative oasis of stability in the Horn of Africa as countries around it have descended into anarchy.
“There is no guarantee that Ethiopia will not descend into further chaos and violence,” says Awol Allo, an Ethiopian lecturer in law at Keele University in the UK and media commentator on the protests. “There is no magic formula here that doesn’t exist in other African countries. After all, we share a large measure of cultural and institutional similarities.”
Some have seen Hailemariam’s resignation as a desperate act of self-preservation by a tiny Tigrayan ethnic elite accused of using Hailemariam to continue and entrench since the end of the country’s civil war in 1991 the domination of its Tigrayan People’s Liberation Front (TPLF) within the ruling Ethiopia People’s Revolutionary Democratic Front (EPRDF) four-party coalition, and thereby over Ethiopia itself. Others, however, say this misses the point about the scale of change forced on Ethiopia’s political space.
“The resignation of the prime minister was not in the interest of the TPLF,” Awol says. “While TPLF is still trying to arrive at a resolution that will continue to preserve its undeserved influence, the resignation is an outcome of the relentless protests of the last two years.”
Having succeeded Ethiopia’s long-term and charismatic ruler Meles Zenawi who died in 2012, Hailemariam never managed to shake off accusations of being a caretaker figure without real power; there to implement the orders of more influential figures in the army and in the TPLF.
A more sympathetic analysis is that Hailemariam, a proclaimed and committed Christian, was always surrounded by a viper’s nest of a government and was increasingly caught between a rock and a hard place.