Women are not just participating in the development story, they are leading it. 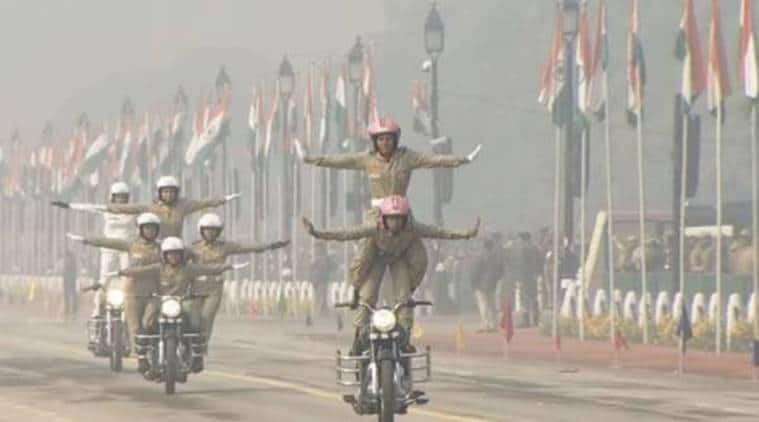 (In picture: BSF women personnel showcase daredevil motorcycle-riding skills at Rajpath on Republic Day. (Source: ANI))
“Our dream of New India is an India where women are empowered, strengthened, where they become equal partners in the all-round development of the country.” Prime Minister Narendra Modi said this recently in his Mann Ki Baat. This was not a mere rhetorical flourish but a representation of the aspirations of millions of women in India; women who are not being restricted to participation in India’s development trajectory but are also leading it.
Socio-economic transformation is possible when a woman is financially independent and is empowered to make free choices.
Since the launch of the Pradhan Mantri Mudra Yojana (PMMY) in 2015, loans worth Rs 2.1 lakh crore have been sanctioned to women entrepreneurs. With 76 per cent of the beneficiaries being women, Mudra is an emancipator for women who are breaking shackles, establishing enterprises.
Krishna Devi, who is above 60 years of age, lives in Pathankot. She never wanted to be dependent on her children for money and she has restarted her business of selling bedsheets with the help of a Rs 5 lakh Mudra loan. At the other end of the spectrum is Chanderkanta who is younger and belongs to the same town. She has availed a loan of Rs 3 lakh under the Mudra Yojana to expand her business by maintaining a healthy inventory.
With a focus on the empowerment of women and SC/STs through access to formal capital, the Stand-Up India scheme was launched in April 2016. It provides loans ranging from Rs 10 lakh to Rs 1 crore. Of the 38,477 loans extended under the scheme, 81 per cent are to women. Rashmi took a loan of Rs 10 lakh and started supplying vending machines to big markets, malls and picture halls. Later, she expanded the supply to multiple cities.
These women are not just financially independent, but also job creators who employ more women in their communities. Entrepreneurship and financial independence, therefore, provides multiple windows of opportunity for more women to join the workforce, sometimes without changing their cities or even stepping out of homes.
For poor households, access to gainful self-employment and wage employment is a way out of poverty. Under Ajeevika, loans are given to self help groups to help them avail of livelihood opportunities. Loans to SHGs of women increased to about Rs 42,500 crore in 2016-17, 37 per cent more than the previous year.
Without financial inclusion, financial independence is unachievable. Jan Dhan, with more than 16 crore women beneficiaries, has given an unprecedented boost to financial inclusion. Notably, the percentage of zero balance accounts has fallen to 20 per cent of the total accounts opened. This means more women are making use of their accounts.
Out of 1.04 crore people who benefitted from the Skill India programme within the first year of its launch, 40 per cent were women. For women who have never received vocational training, Skill India has been an entry point into the job market and prosperity.
To incentivise employment of women in the formal sector, amendments in the Employees Provident Fund and Miscellaneous Provisions Act, 1952 have been proposed in this year’s budget. Women employees’ contribution has been reduced to 8 per cent for the first three years of employment against the existing rate of 12 per cent or 10 per cent.
From bank accounts to businesses, from financial inclusion to financial independence, the Modi government has worked towards empowerment of women. When aspiration meets empowerment, a New India powered by its Nari Shakti takes shape.
The impact of giving wings to the aspirations of women was outlined by PM Modi: “When we empower the women in a family, we empower the entire household. When we help with a woman’s education, we ensure that the entire family is educated… When we secure her future, we secure the future of the entire home.
The writer is a BJP MP.
For all the latest Opinion News, download Indian Express App
Publicado por salud equitativa en 4:34