Much ado about an impractical idea | The Indian Express

Much ado about an impractical idea | The Indian Express

Much ado about an impractical idea

Attempts to legislate schemes akin to Universal Basic Income failed in 18th and 19th century England. In China, too, they haven’t succeeded. Bhalla thinks UBI is a terrible idea because it messes up incentives. That may well be the case. I find it a terrible idea because I don’t know what UBI means.
Surjit Bhalla is a co-columnist in this paper and a colleague in the Economic Advisory Council to the Prime Minister. Therefore, when he writes a new book, reading it is an inevitable professional hazard. His new book is titled The New Wealth of Nations. It is about education as the creator of this new wealth. In this book, in passing (since this doesn’t have much to do directly with the book’s core proposition), Bhalla brings in Universal Basic Income (UBI) and the Speenhamland system. This took my mind back several decades, to my student days, when one read about poor laws in Britain. “The justices of Berkshire, meeting at the Pelikan Inn, in Speenhamland, near Newbury, on May 6, 1795, in a time of great distress, decided that subsidies in aid of wages should be granted in accordance with a scale dependent upon the price of bread, so that a minimum income should be assured to the poor irrespective of their earnings,” Surjit cites this quote from Karl Polyani’s The great transformation. The original edition of this book was published in 1944. Where was Polyani in 1944? Bennington College, and later, Columbia University in the US. I find a lot of people quoting from Polyani’s book. Pelikan Inn? That’s not how I remembered it from the works of Mark Blaug and Eric Hobsbawm. I remembered it as Pelican Inn.
Indeed, it was Pelican Inn; references to it go back to 1646. There were two adjacent inns, George and Pelican. When travel by coaches was important, travelers from (and to) London often stopped at Newbury and frequented George and Pelican. Pelican seems to have been more like stables and entertainment (there was a Pelican Theatre), while George is where people stayed. I found this delightful poem about Pelican Inn. “The famous inn at Speenhamland, That stands below the hill, May well be called the Pelican, From its enormous bill.” By middle of the 19th century, George and Pelican shut down. As for the Speenhamland System, it was never as common as is often assumed. There was an attempt to legislate and make it universal through the Poor Law Bill of 1796, but that failed. Whatever remained was killed by the Poor Law Amendment Act of 1834. I tracked down the minutes of the meeting of Berkshire Justices at Speenhamland, Newbury, on May 6, 1795, and discovered something I hadn’t been aware of. This was a “General Meeting of the Justices of this County, together with several discreet persons assembled by public advertisement”.
“The Magistrates very earnestly recommend to the Farmers and others throughout the county, to increase the pay of their Labourers in Proportion to the Present Price of Provisions”. There was thus a scale of wage supplements, depending on number of children in the household and price of bread. I am not sure this should be called UBI, though that’s how it is often presented. I hadn’t known that the trigger for the Speenhamland meeting was an intervention by a court. “At the General Quarter Sessions of the Peace for this County, held at Newbury on Tuesday the fourteenth instant (of April 1795), the Court having taken into consideration the great inequality of Labourers’ Wages, and the insufficiency of the same for necessary support of an industrial man and his family; and it being the opinion of the gentlemen assembled on the Grand Jury, that many parishes have not advanced their labourers’ weekly pay in proportion to the very high price of corn and provisions do.” Hence, there was a court directive to hold that meeting. Bad ideas often emanate from the judiciary, not the executive. However, in fairness, the court directive only mentioned prices of corn and other provisions. It didn’t mention number of children in the household.
Bhalla thinks UBI is a terrible idea because it messes up incentives. That may well be the case. I find it a terrible idea because I don’t know what UBI means. There is a certain amount of public expenditure which the government (in its different layers) makes. Surely, all that is not going to be converted into an equivalent UBI. Often that public expenditure is in the form of collective goods, such as roads or railways, or law and order and security. Surely, one is not going to tell a community: Here is your equivalent money, go and build your own road. Therefore, any concrete UBI presumably means public expenditure (such as through various subsidies) on individual/household goods. In that event, why introduce new acronyms unnecessarily? Why not simply call it DBT (direct benefit transfers)? Perhaps one means universal social security (life insurance, medical insurance, pensions). Again, it would be simpler to call it just that, instead of UBI. Unless there is precision, UBI sounds suspiciously like what the Chinese used to call iron rice bowl. This meant a guaranteed standard of living, irrespective of the worker’s efforts (There is a story behind the expression “iron bowl”). It didn’t work and was progressively abandoned. Karl Marx’s idea in Critique of the Gotha Programme, “From each according to his ability, to each according to his needs”, hasn’t worked as well. But Marx also acknowledged this could only happen “in a higher phase of Communist society”, not immediately. Outside of China, I don’t think any socialist country has attempted to implement it, not even partially. The former Soviet Union always said it was in a lower stage of Communism.
The writer is chairman, Economic Advisory Council to the PM. Views are personal
For all the latest Opinion News, download Indian Express App
More From Bibek Debroy 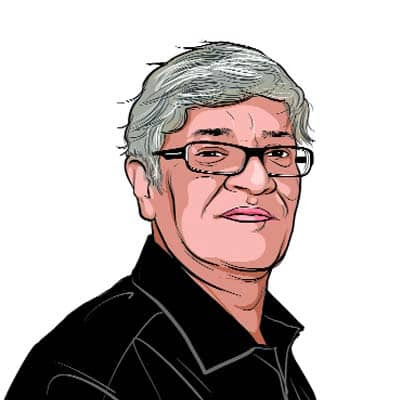