Legal Africa-Asia Wildlife Trade Gets a Look in 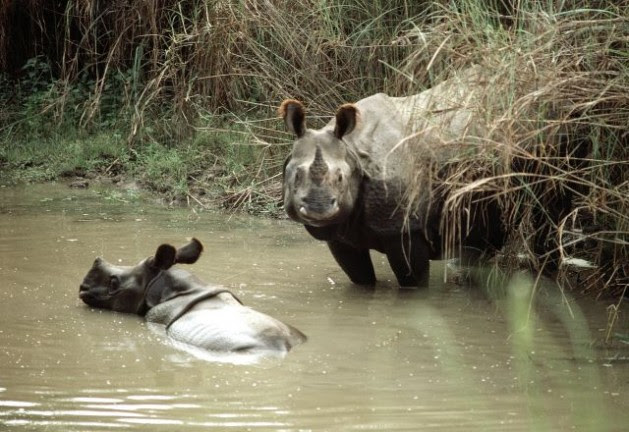 Mother and baby rhinoceros in Tigertops Wildlife Sanctuary, Nepal. The unrestricted exploitation of wildlife has led to the disappearance of many animal species at an alarming rate, destroying earth's biological diversity and upsetting the ecological balance. Credit: UN Photo/John Isaac
CAMBRIDGE, UK, Mar 8 2018 (IPS) - In recent years, the focus on wildlife trade between Africa and Asia has been almost exclusively on poaching of iconic mammals and the smuggling of their parts.

Meanwhile, the vast, legal trade in wildlife has received scant attention, despite its many potential positive impacts, such as providing support to livelihoods and sustainable income for local communities.
A new TRAFFIC study released this week attempts to restore some of the balance in attention to wildlife trade issues through an examination of the trade in wildlife sourced in Africa and traded to Asia. It endeavours to shed light on legal trade trends, the diversity of species and countries involved, and new patterns emerging.
The data used was all publicly accessible, as information provided by Parties to the Convention on International Trade in Endangered Species of Wild Fauna and Flora (CITES) on trade in species listed within the Convention.
The analysis was made possible thanks to the generous support of Arcadia—a charitable fund of Lisbet Rausing and Peter Baldwin. It revealed more than 1.3-million live animals and plants, 1.5-million skins and two thousand tonnes of meat were exported between 2006 to 2015 from 40 countries and a disputed territory in Africa, to 17 countries and territories in East and Southeast Asia.
There was a remarkable diversity: some 975 different taxa in all and among the trade patterns identified were the rising number of live animal and plant exports and the increased sourcing of species from captive breeding operations: from 42% in 2006 to a peak of 66% in 2013.
The analysis found evidence of newly emerging trade in hippo teeth from Malawi; a rise in European Eel exports from North Africa, mostly to South Korea in response to a European ban; and the abrupt start of trade in some 44,575 Mistletoe Cacti and related species exported from Kenya and Tanzania that began in 2015.
Some of the wildlife traded in the largest quantities were species that receive little political attention within CITES, notably Leopard Tortoises, more than 80% of which, some 183,328 animals, were exported by Zambia, and Ball Pythons, with Ghana (93,168 animals) and Togo (37,661) the leading exporters and Hong Kong the dominant importer of both.
Nile Crocodiles dominated skin exports with some 1.4 million skins, mostly sourced from ranching operations, although Namibia topped the table for mammal skin exports, predominately those of Cape Fur Seals, with some 108,272 traded to seven countries and territories in Asia. Perhaps surprisingly, some 11,285 African Elephant skins were exported, primarily from Zimbabwe and South Africa.
The latter country was Africa’s largest exporter of live birds, mammals and plants. The first category was dominated by some 40,635 Grey Parrots and 35,201 Sun Parakeets: neither species is native to the country but captive-bred there. Unsurprisingly, given its historic connections to bird trade, Singapore imported most live birds.
Live amphibians were exclusively exported by Madagascar, with Japan the major importer, while just three species accounted for all the reported meat exports: Nile Crocodile, European Eel and Cape Fur Seal.
The above are examples of the remarkable insights into the hugely complex international trade in endangered species taking place daily. They illustrate how data can be used to improve our understanding of CITES trade dynamics, highlighting the major commodities, species and countries involved.
Analysis can also serve as an important early warning tool for monitoring species in trade, to detect emerging trends and potential threats such as overharvesting or the movement of potentially invasive species.
Meanwhile, we are living in an era of “big data”, which offers many exciting opportunities for the use of such information to support conservation aims. But to make the most of these opportunities, we need to ensure people have the skills to carry out relevant analyses, using tools such as the recently launched DETECT IT tool for fisheries data (https://detect.trade/).
However, perhaps the most critical skill needed is that of the national CITES Authorities who decide what levels of trade are considered sustainable—how many plants or animals that can be harvested and exported, so the population as a whole does not decline.
Known technically as non-detriment findings (NDF), they should underpin every transaction analysed in this latest study. Without an NDF, CITES export permits cannot be granted or quotas set, yet determining NDFs is far from straightforward.
Again, help is at hand (https://cites.org/eng/prog/ndf/index.php), but the sheer scale of trade in wildlife between Africa and Asia places a considerable burden on national CITES Authorities.
To enable them to carry out their vital role as accurately and efficiently as possible is in the best interests of conservation for all wildlife species in international trade and the benefits to people such trade can bring.
*Eastward Bound: Analysis of CITES-listed flora and fauna exports from Africa to East and Southeast Asia is available from: www.traffic.org/storage/TRAFFIC-Africa-Asia-report.pdf