Hezbollah doesn’t expect Israeli war, but is ready for one | The Indian Express

Hezbollah doesn’t expect Israeli war, but is ready for one | The Indian Express

Hezbollah doesn’t expect Israeli war, but is ready for one

As the war in Syria enters its eighth year, Sheikh Naim Qassem also said there was no end in sight to the conflict which would go on for at least two more years, and President Bashar al-Assad could not be forced out of an eventual settlement. 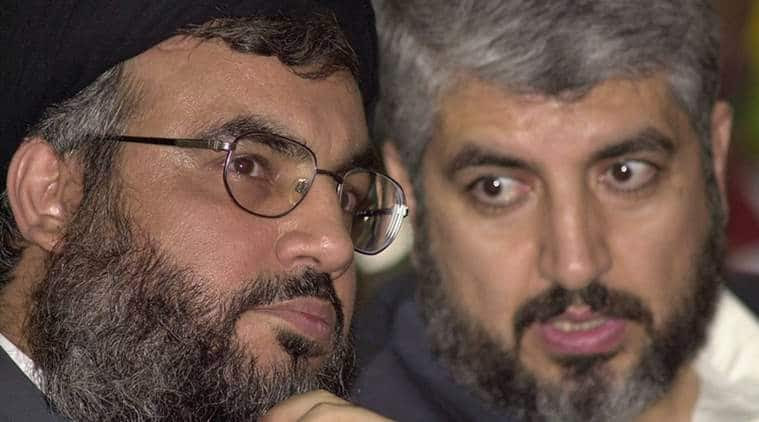 FILE — In this March 27, 2004 file photo, Sheik Hassan Nasrallah, leader of Hezbollah guerrilla group, left, chats with Khaled Mashaal, head of Hamas’ political bureau during a Hezbollah rally held in south of Beirut, Lebanon, to mark the assassination of Hamas founder Sheik Ahmed Yassin. (AP Photo/Hassan Ammar, File)
Lebanon’s powerful Hezbollah does not expect its arch foe Israel to launch a war for now in Lebanon but is prepared for one, the deputy leader of the Iran-backed Shi’ite group told Reuters in an interview on Thursday. As the war in Syria enters its eighth year, Sheikh Naim Qassem also said there was no end in sight to the conflict which would go on for at least two more years, and President Bashar al-Assad could not be forced out of an eventual settlement.
“There is no solution in Syria under the title of ‘excluding President Assad’. On the contrary, the solution in Syria is with President Assad, and he is the mandatory channel for the solution,” Qassem said. The heavily armed Hezbollah joined the war in support of Assad in 2012, and has played a critical part in helping his government defeat Sunni rebels backed by the United States and its regional allies – Saudi Arabia, Qatar and Turkey. Hezbollah has spearheaded a coalition of Tehran-backed Shi’ite militias that have deployed to Syria from Iraq, Afghanistan and Pakistan. Iran’s expanding power in Syria has caused deep alarm in neighbouring enemy Israel.
Israel has mounted numerous air strikes in Syria against what it has described as Hezbollah and Iranian targets. Prime Minister Benjamin Netanyahu warned last month that Israel would not allow Iran to put a “noose of terror” around its neck and it could act not just against Iran’s proxies, but Iran itself.
In Lebanon, where Israel and Hezbollah last fought a major war in 2006, Iran is helping the group build factories to manufacture precision-guided missiles or refit its longer-range missiles with precision guidance systems, Israeli and U.S. officials say.
Asked about the Israeli accusations and warnings, Qassem said he would not comment on Hezbollah’s military capabilities, deployments or plans.“We don’t talk about the military details, be it our capabilities or those of our allies, or our deployments, because they are secrets that we retain and we don’t want to give a free gift to our enemy,” he said.
Hezbollah “is ready to confront the aggression if it happens, if Israel decides to carry out any foolish action”, he said. “But it does not appear that the circumstances are for an Israeli decision for war.”
“We have declared repeatedly and frequently that we, as the resistance, work to have permanent readiness and we are ready to confront the Israeli aggression if it happens, and therefore we are ready to defend ourself by all available means.” “We are working to fortify our front, and to be ready.”
HEZBOLLAH WILL STAY IN SYRIA AS LONG AS NECESSARY
In Syria, however, he said it was possible Israel would conduct further “limited” attacks. “The Syrian regime has taken the decision to respond to this type of attack,” he added.
Syria’s air defences last month shot down an Israeli F-16 as it was returning from a bombing run in Syria after Israel said Iran had sent a drone into Israeli air space.
Working closely with the Russian air force and Iran’s Revolutionary Guards, Hezbollah has helped turn the tide in the Syrian war which appeared to pose a threat to Assad’s rule as recently as 2015.
The conflict passed its seventh anniversary on Thursday, having killed half a million people, driven out 5.8 million as refugees and uprooted millions more in the country.
Qassem said Hezbollah would stay in Syria as long as necessary. “If we reach a political solution, of course Hezbollah will return to Lebanon.”Assad and his allies had won the war by defeating what he described as a U.S.-led plot to destroy Syria, he added. “Syria has won the military battle, which will help them to win the political battle,” he said.
He added that Islamic State fighters who had sought to make Syria part of their “caliphate” had received a heavy blow and lost territories they held. While Assad’s rule is no longer in danger, large areas of Syria remain outside his control at the borders with Turkey, Iraq, Jordan and Israel.
The United States has deployed forces into northern and eastern Syria where it is allied with Kurdish-led militia known as the Syrian Democratic Forces. Turkey has also sent forces into the northwest.
Qassem however did not expect the Syria war to lead to a direct confrontation between major powers.
“It is clear that all the parties and their allies view that it is in their interests not to have a direct confrontation between America and Russia, and they have rules of engagement that they have studied together and are abiding by,” he said.
For all the latest World News, download Indian Express App
Publicado por salud equitativa en 4:56