Trump supports a bill that provides schools with funding for training to identify warning signs for violence, anonymous tip lines and other measures to boost school safety. 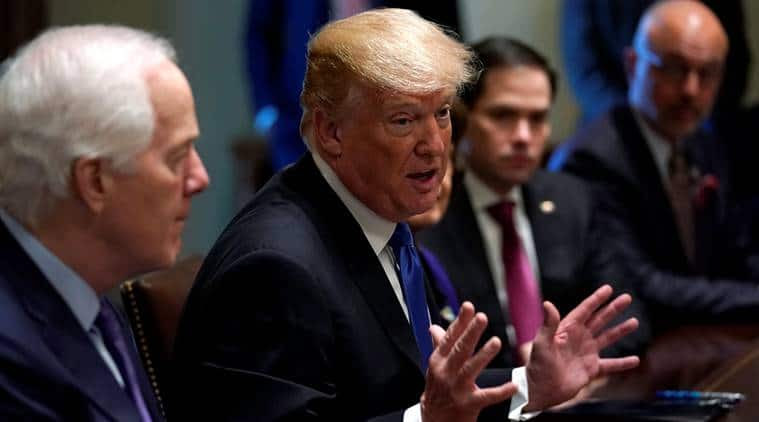 US President Donald Trump meets with bi-partisan members of Congress to discuss school and community safety in the wake of the Florida school shootings at the White House in Washington, U.S., February 28, 2018. (Source: REUTERS)
US President Donald Trump, a Republican who has frequently pledged support for gun rights, is urging changes to gun laws and other safety measures after the February 14 mass shooting at a Florida high school that killed 17 people. Here are the proposals in play for Trump, who faces pressure to act from student activists pushing for tougher gun laws, as well as opposition from gun owners, the politically powerful National Rifle Association, and Republicans worried about how the issue will shape congressional elections in November.
BROADER BACKGROUND CHECKS
Trump supports a bill that would strengthen a database of people who are not legally allowed to buy guns. The bill would provide incentives for federal agencies and states to upload more data into the system. Some Republican senators have already expressed concerns that errors in the expanded data could prevent some people from legally exercising their constitutional right to own guns.
One potential snag: the House of Representatives has already passed a version of the bill that includes a measure allowing people to bring legal concealed guns across state lines. The Senate would likely balk at the provision, and Trump said it should be left for another time. Trump also supports a proposal to require background checks at gun shows or on internet sites, which has been a way around the background checks conducted for sales in stores. This idea has failed twice in the past five years to find enough backing in the Senate. Trump also said he was open to adding domestic violence data into the database.
READ | Here is how mass shootings have shaped gun laws in UK, Australia, Germany
AGE LIMITS Students returned to class at the high school, Wednesday, following the Feb. 14 mass shooting that killed several students and teachers. (Source: AP)
Trump said he would seriously consider legislation that restricted gun sales to people aged 21 and over. Currently, 18-year-olds can buy many types of guns. Republicans in Congress, who control both the House and Senate, have shown little appetite for the measure.
FUNDS FOR THREAT DETECTION
Trump supports a bill that provides schools with funding for training to identify warning signs for violence, anonymous tip lines and other measures to boost school safety. There is broad bipartisan support for the measures.
BUMP STOCKS
Trump has asked his administration to craft regulations to effectively ban sales of “bump stock” accessories that enable semiautomatic rifles to fire hundreds of rounds a minute. Banning bump stocks, which were not used in the Florida shooting but were used in a massacre in Las Vegas in October, which was the deadliest mass shooting in modern US history, has been studied in the past and deemed to require action by Congress. New regulations could be tied up with lawsuits. There is little momentum in Congress to change the law.
ARMING TEACHERS Local residents show their support as students arrive at Marjory Stoneman Douglas High School for the first time since the mass shooting in Parkland, Florida, U.S., February 28, 2018. (Source: REUTERS)
Trump is most enthusiastic about the idea of training certain teachers and staff to carry concealed guns, which he said would be the most cost-effective way to protect students in the event of a shooting. Trump said he believes potential school shooters would be deterred by knowing some teachers are armed. This proposal falls in the jurisdiction of state and local governments, a point that Trump and Republican lawmakers have emphasized. The idea has been adopted in Texas and some other states, but teachers’ unions and some law enforcement groups have panned it.
READ MORE | Donald Trump has a solution for school shootings: Arming teachers
MENTAL HEALTH SERVICES
Trump has said he would address mental health, but has not provided specific ideas. He has bemoaned the lack of mental institutions to treat people who may be violent. Congress is likely to direct new funds to mental health under a 2016-passed law that authorizes money to move forward for the first time this year.
“RED FLAG” LAWS
Some states have laws allowing police to temporarily seize guns from people reported to be dangerous. Trump said he supports the concept. There is some work in Congress to create incentives for more states to adopt the laws.
BAN ON SEMIAUTOMATIC RIFLES
Students who survived the Florida shooting, gun control groups and many Democrats want a federal ban on semiautomatic rifles, sometimes called assault rifles. There was a federal ban on assault-style weapons from 1994-2004, but there is little support for a renewed ban among Republicans. Trump has not expressed an opinion, but encouraged a bipartisan group of lawmakers to look at proposals from Democrats.
MOVIES AND VIDEOGAMES
Trump has expressed concern that children are exposed to too much violence in movies and videogames, and said ratings systems should be improved.
For all the latest World News, download Indian Express App
Publicado por salud equitativa en 3:13