The protests commemorated the 17 students and staff killed at Marjory Stoneman Douglas High School in Parkland, Florida, on Feb. 14. The massacre was the latest in a series of shootings that have plagued U.S. schools for nearly two decades. 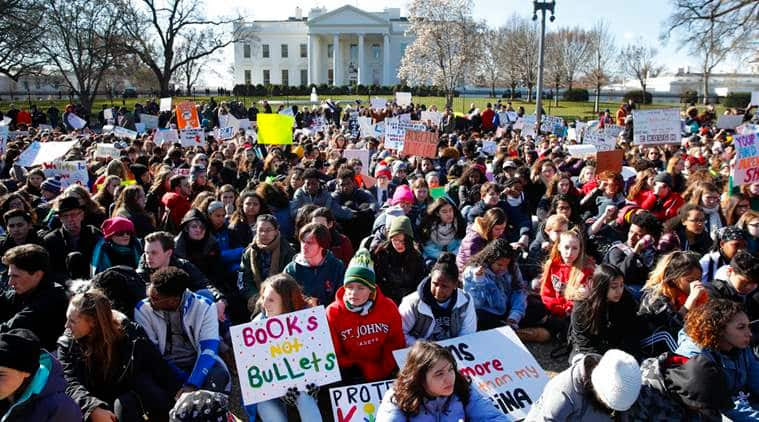 Students sit in silence as they rally in front of the White House in Washington, Wednesday, March 14, 2018. Students walked out of school to protest gun violence in the biggest demonstration yet of the student activism that has emerged in response to last month’s massacre of 17 people at Florida’s Marjory Stoneman Douglas High School. (AP Photo/Carolyn Kaster)


U.S. students spilled out of classrooms by the thousands on Wednesday morning, waving signs and chanting slogans like “We want change,” in a coast-to-coast protest against gun violence prompted by a deadly rampage at a Florida high school last month. The #ENOUGH National School Walkout began in the Eastern time zone at 10 a.m. (1400 GMT) and was scheduled to last 17 minutes but many protests went longer. Students in other time zones planned to walk out at 10 a.m. local time.
The protests commemorated the 17 students and staff killed at Marjory Stoneman Douglas High School in Parkland, Florida, on Feb. 14. The massacre was the latest in a series of shootings that have plagued U.S. schools for nearly two decades.
While many school districts gave their blessings for the protests, students in some areas defied warnings of discipline to join the walkout. Some students made an early start. At Fiorello H. LaGuardia High School in New York City, crowds of students poured into the streets of Manhattan, many dressed in orange, the color of the gun-control movement.
“Thoughts and prayers are not enough,” read one sign, needling the rote response many lawmakers make after mass shootings. At 10 a.m., the hundreds of students sat down on the sidewalk, filling half a city block, and fell silent. In Parkland, thousands of students slowly filed onto the Stoneman Douglas school football field to the applause of families and supporters beyond the fences as law enforcement officers looked on. News helicopters thrummed overhead.
Ty Thompson, the school’s principal, called for the “biggest group hug,” and the students obliged around the 50-yard line. “We want change!” students chanted on the sidewalks outside the school. “Can you hear the children screaming?” read one of the signs.
The walkouts were part of a burgeoning, grassroots movement that grew out of the Parkland attack. Some of the survivors have lobbied state and federal lawmakers, and even met with President Donald Trump, to call for new restrictions on gun ownership, a right protected by the Second Amendment of the U.S. Constitution.
“We don’t feel safe in schools anymore,” Sarah Chatfield said. A 15-year-old high school student from Maryland, Chatfield had joined a crowd of hundreds protesting outside the White House, with some sitting silent with their backs turned.
“Trump is talking about arming teachers with guns,” she said. “That is not a step in the right direction.” Soon after, some of the students began marching toward Capitol Hill. “Hey hey, ho ho, the NRA has got to go!” they chanted, referring to the powerful gun-rights interest group, the National Rifle Association.
Some students crammed into a packed hearing before the U.S. Senate Judiciary Committee about gun laws and school safety, which was to include testimony from federal law enforcement officials and the father of one of the Parkland victims. The Parkland survivors’ efforts helped bring about a tightening of Florida’s gun laws last week, when the minimum age for buying any kind of gun was raised to 21 years from 18, although lawmakers rejected a ban on the sort of semiautomatic rifle used in the Parkland attack.
In Washington, however, plans to strengthen the background-check system for gun sales, among other measures, appear to be languishing. Students from more than 2,800 schools and groups are joining the walkouts, many with the backing of their school districts, according to the event’s organizers, who also coordinated the Women’s March protests staged nationwide over the past two years.
The protests took place a day after Florida prosecutors said they would seek the death penalty for Nikolas Cruz, who has been charged with 17 counts of premeditated murder and 17 counts of attempted murder in the Parkland attack. The New York City Department of Education allowed students to participate if they submitted a signed permission slip from their parents.
But a few school districts around the country had warned against protests during school hours, though some students were undeterred. Some 200 students walked out of the Council Rock High School North building in Newtown, Pennsylvania, despite warnings from school administration that doing so would bring discipline. The district, citing safety concerns, had organized an alternative event, allowing students to walk out of their classrooms but remain in the building.
“Students deserve the right to go to school feeling safe and comfortable, not feeling scared that their school will be the next target,” a student said into a megaphone to the group outside. In Bentonville, Arkansas, a high school student was suspended on Tuesday after handing out unauthorized flyers promoting the walkout, local news media reported.
Leslee Wright, a spokeswoman for the Bentonville schools, declined to comment on the report, citing laws regarding student confidentiality. But she confirmed that the district board voted 4-3 to enforce its student handbook on Wednesday, which requires detention for students who are absent from school without a doctor’s note.