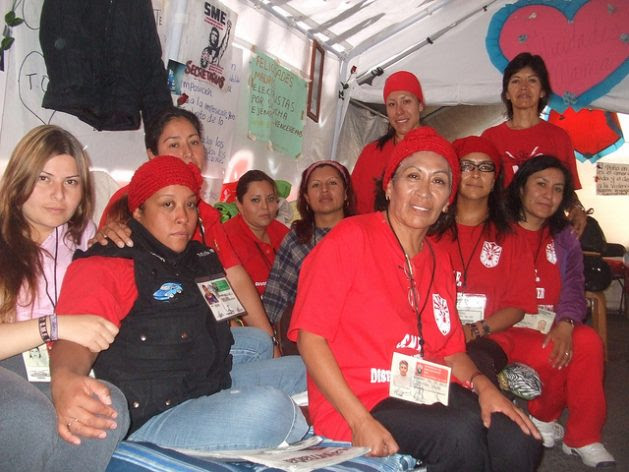 MEXICO: Women Electrical Workers at Centre of Struggle for Jobs. Credit: IPS
UNITED NATIONS, Mar 6 2018 (IPS) - Women’s role in the workplace is at the heart the International Women’s Day commemoration. Even though it first celebrated a demonstration by women workers in New York in 1857, it was the killing of nearly 150 young women workers in a sweatshop, engulfed by a massive fire in just 20 minutes, which marked the modern celebration of International Women’s Day, in New York’s Triangle Shirtwaist Factory on 25 March 1911.
Over a century later, in spite of the huge progress made, the tragedy still reminds us of the essential role of women in the workplace and the urgent need to protect women’s rights—which are human rights.
A quick glance at the situation of women in the workplace today in Latin America and the Caribbean– the region I cover as the UN Development Programme (UNDP)’s regional hub director– shows that women perform 75 percent of unpaid domestic work, one in three do not generate any income, and 54 percent work in informal contexts, with unstable incomes and little social protection. We are depriving businesses, as well as society as a whole, of their talent and financial contribution to the family economy and that of their communities and countries.
Since women make up half of the population of our region, it would make sense for them to have a similar representation in the different sectors of society. It is not only a matter of rights, but also a smart move, because equal representation generates increased benefits for both men and women, socially and economically.
With this in view, just last week I joined over 500 women and men, including business leaders, government and trade union representatives, from 38 countries in five continents who committed themselves to promote gender equality in the workplace. They joined the Chile Call to Action to boost women’s roles in business, during the 4th Global Forum on Businesses for Gender Equality, a joint initiative by the Government of Chile and UNDP, in partnership with the International Labor Organization (ILO) and UN Women, which took place 27-28 February in Santiago.
The gathering in Chile highlighted that we have an extraordinary opportunity to promote the role of women in the social, political, and economic spheres. This is essential if we want to achieve the Sustainable Development Goals (SDGs) —a series of global goals that include eradicating poverty in all its forms, promoting equitable growth, and achieving quality education for all— within the next 12 years. The SDGs are strongly interconnected and gender equality plays a crucial role to achieve them all.
Businesses must step up and take concrete actions to make this happen—and there’s no time to lose. Gender equality in the labor force could add up to US$28 trillion to the global economy by 2025, according to a report by the McKinsey Global Institute. Also, companies that are more diverse tend to be more innovative; and innovative companies tend to be more diverse. Both factors are key drivers of growth, a recent Harvard Business Review studyfound.
Moreover, recent studies reveal that increased participation of women on company boards leads to better financial results, as well as higher levels of corporate philanthropy. Nonetheless, women hold less than 5 percent of CEO positions in S&P 500 companies and less than 20 percent on company boards.
The numbers are not any better for Latin America, where, according to ILO, women represent only 4.2 percent of CEOs among the 1,269 listed companies. Also, almost half of the executive boards in the region are comprised exclusively of men with women making up only 8.5 percent of membership on average.
In both rich and poor countries, women bear a disproportionate burden of unpaid care work, depriving them of opportunities to earn an income, start their own businesses, and participate in public life; therefore, depriving economies of their talents and contributions.
According to the latest Global Gender Gap Report of the World Economic Forum, it is estimated that at the current rate of progress it will take at least another 220 years to close this gender gap and achieve equal participation in the workforce.
We can wait no longer.
To help countries take concrete actions, over the last decade, UNDP has supported partners in 17 countries in Latin America and the Caribbean, Africa, Asia, and Eurasia to certify public and private companies that meet gender equality objectives.
Through the “Gender Equality Seal” initiative, certified companies commit themselves to eliminating the gender pay gap, increasing the number of women in decision-making positions, improving work-life balance, eradicating sexual harassment in the workplace, and increasing the participation of women in traditionally male industries.
Business leaders from several countries, gathered in Chile last week, detailed how they are already reaping benefits from their drive to boost women’s roles in their companies. For example, in Chile, the state owned copper company Codelco has been promoting, through the Gender Seal initiative, mixed groups of men and women in this traditionally male industry, resulting in increased productivity.
Similarly, the National Bank of Costa Rica increased the representation of women in decision-making positions through a leadership program that allowed 70 women to assume managerial positions. Along the same line, Scotiabank of Canada identified potential employees for a “Talent Pool” offering tutorial programs to improve women’s access to high-level positions.
Even though empowering women and girls is key to achieving sustainable development, International Women’s Day still reminds us that gender bias remains a significant obstacle to global progress. Still today, this prejudice is particularly acute in the workplace.
We have an opportunity at hand. And it must be seized. The cost of not allowing women to contribute in the same way as men is too great, not only for companies, but for society as a whole. Companies, both public and private, can be the main drivers of sustainable growth, playing a key role to reduce inequalities and leave no one behind.