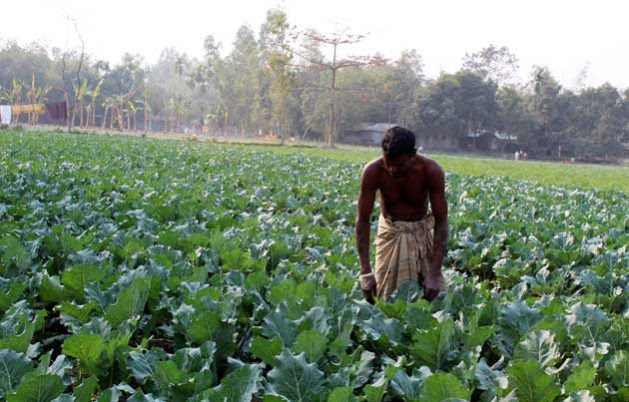 A farmer at Boirati in Rangpur cultivating cabage using vermicompost. Credit: Rafiqul Islam Sarker/ IPS
KALIGANJ, Bangladesh, Feb 26 2018 (IPS) - In Kaliganj village, 20 kilometres south of Rangpur city in Bangladesh, small farmers are turning to vermicomposting after crop yields started dropping. The problem was that soil fertility eroded due to organic nutrient depletion.
“In the early 1980s when I began cultivating crops with chemical fertilizers, I got bumper production of all crops,” said Azizar Rahim, a small farmer who until five years ago used to get three tonnes of Boro and two tonnes of Aman paddy per acre annually (Boro and Aman are the main cereal crops in Bangladesh).
To his dismay, after 20 years, his land no longer produced the same amount of paddy even though he continued to use the same amount of chemical fertilizers. Heavy use of agrochemicals introduced in the 1980s boosted food productivity but at the cost of the environment. Soil organisms and their natural fertility were destroyed, making crops less resistant to pests and diseases and adversely affecting human health.
“The yield was less than 5 to 10 percent than that of the earlier years and meanwhile, there was a 30 to 40 percent increase in the cost of production. I incurred huge losses with no end in sight,” Azizar told IPS. 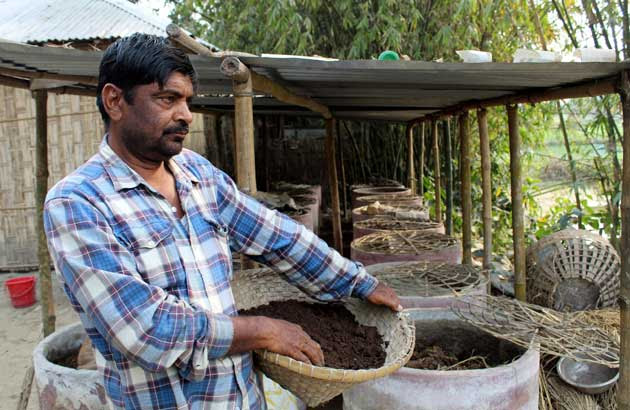 Azizar Rahman of Kaliganj in Rangpur of Bangladesh collecting vermicompost to spread in his paddy cultivated land. Credit: Rafiqul Islam Sarker/ IPS
Thousands of farmers like Azizar in the north of Bangladesh had the same experience. With this scenario as the backdrop, experts from the Bangladesh Soil Resource Test Institute (BSRTI) conducted soil tests in the region and discovered depletion of organic matter and a high increase of acidity in the soil.
Referring to the BSRTI experts’ findings, Bangladesh Regional (Rangpur) Farm Broadcast Officer Abu Sayem told IPS that the minimum requirement of organic matter in the soil is at least 5 percent. “However, the organic nutrient amount in the soil had dropped down to 2 percent at some places in the north, and this led to negative impacts on production,” Sayem added.
As agriculture is their main and only occupation, farmers of this region engage in diversified intercropping to produce more crops using the same land.
“To do this mammoth task, farmers in the region continuously use chemical fertilizers in their soil. Thus, the soil has lost organic nutrients and added acidity to a great extent, resulting in low yield and high production cost,” said Prof. Dr. Md. Shafiqul Islam Sikdar, chair of the Department of Agronomy Department of Hazi Mohammad Danesh Science and Technology University in Dinajpur, 50 kms north of Rangpur.
He also observed that cropping intensity in the north is above 200 percent, which is more than that of other regions in Bangladesh. “The higher cropping intensity rate badly affected the soil,” Shafiqul added. 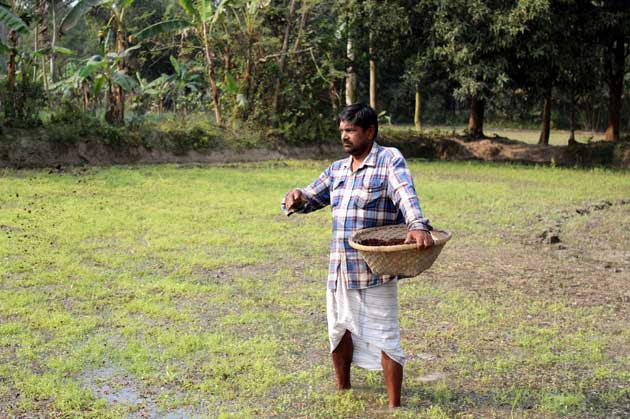 Azizar Rahman spreading vermicompost in his paddy cultivated land at Kaliganj in Rangpur of Bangladesh. Credit: Rafiqul Islam Sarker/ IPS
According to the Yearbook of Agricultural Statistics- 2016 published by the Bangladesh Bureau of Statistics (BBS), the agriculture sector – with a 192 percent cropping intensity – plays a pivotal role in the country’s economic development. About 35 million tonnes of food grains are grown annually by 18 million farming households, comprising more than 17 percent of the country’s GDP.
“Agricultural scientists emphasized the need of cropping intensity to meet the growing food demand for about 163 million population of the country and the farmers did it accordingly,” added Shafiqul.
As the soil situation deteriorated and became a great concern for the farmers of the north, scientists at the Department of Agriculture Extension (DAE) began looking for ways to rectify the situation. In the mid-1990s, they suggested farmers increase organic matter in the soil. Primarily farmers produced pit compost with hyacinth, banana logs or household waste, water and mud. The local DAE officials, at the advice of the Parliament Member of Rangpur-5 constituency H.N Ashiqur Rahman, began providing extended training support and developed awareness among the farmers about the use of pit compost.
When added to the soil, pit compost improved the organic nutrient in soils and the farmers began to get better yields with reduced expenses.
Meanwhile, agricultural scientists introduced vermicompost in Bangladesh and its production and use led to tremendous output.
Vermi is derived from Latin and means earthworm. Compost is decomposed organic matter which is recycled as fertilizer in the soil. So vermicompost is the product of the composting process using earthworms. 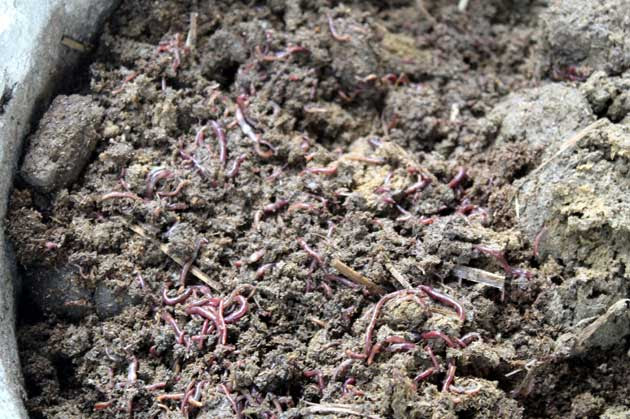 Earth-worm are kept in cow-dung to produce vermicompost at a farm in Mithapuku, Bangladesh. Credit: Rafiqul Islam Sarker/ IPS
Regional Farm Broadcast officer Abu Sayem told IPS that vermicompost was very effective in quickly restoring organic nutrients in the soil.
“Vermicompost can be produced in many ways and in our country it is produced with the cast of earthworm and cow dung,” said Sayem, adding that farmers can easily produce it at their homesteads.
“Earthworms can easily consume and digest cow dung. Cow dung itself is organic. As earthworms eat cow dung, its cast becomes highly potential organic matter,” Abu Sayem said.
In the north, farmers use Eudrilus Eugenie and Eisenia earthworms for vermicompost. Once, these types of earthworms were not available in Bangladesh. They were imported from Thailand in the mid-1990s and multiplied by breeding in the country. The DAE under the Ministry of Agriculture of Bangladesh supplied earthworms and provided technical know-how to the farmers of the North to produce vermicompost at homes and farms. 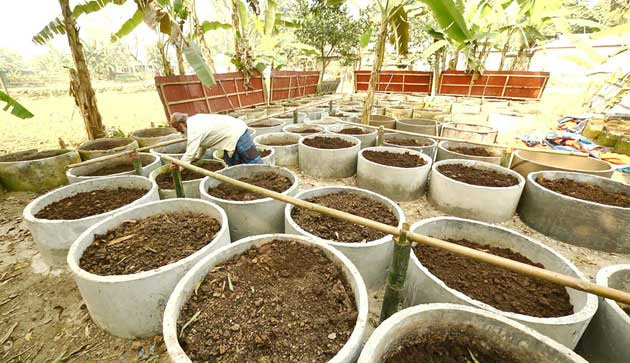 A person at Imadpur in Rangpurproducing vermicompost in the commercial basis. Credit: Rafiqul Islam Sarker/ IPS
“We were able to minimize the use of chemical fertilizers to grow crops,” said Shah Alam, a farmer from Boirati village in Rangpur. He said farmers could reduce crop production costs at least by fifty percent by using vermicompost to enhance the soil.
Interestingly, many farmers in the region are producing vermicompost commercially and selling it for taka 20 (25 cents) per kilogram.
According to DAE data, about 19,933 metric tonnes of vermicompost is now produced per month by about 20,000 farmers in Rangpur alone.