Significantly, the new State Councillor Wang had adopted a tougher stance than his then boss Yang during the two-and-half month-long Doklam crisis last year. A fluent speaker of Japanese and English, Wang visited India last December for the Russia-India-China trilateral meeting, when he met External Affairs Minister Sushma Swaraj. 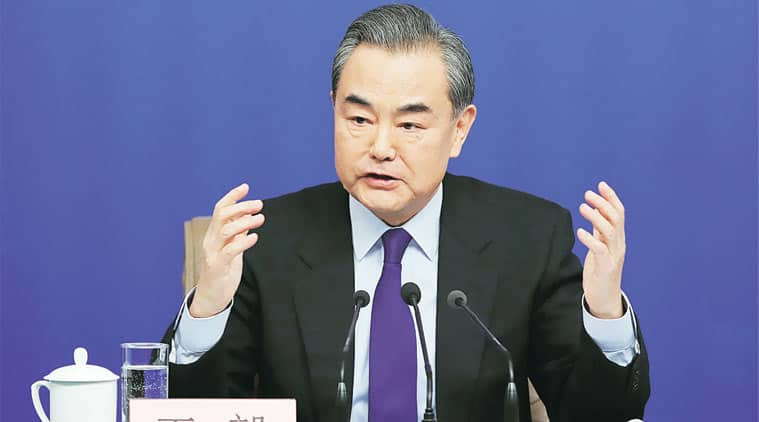 Chinese Foreign Minister Wang Yi. (Photo: AP)
MAKING KEY appointments that are significant from the Indian context, China Monday named its Foreign Minister Wang Yi as the new State Councillor, the country’s highest diplomatic position, and former missile unit commander, Lt General Wei Fenghe, as its new defence minister.
With the appointment, Wang is likely to become the next Special Representative (SR) for India-China border talks with National Security Advisor Ajit Doval on the Indian side. If that happens, he will be the third Chinese SR in the last 15 years after Dai Bingguo and previous State Councillor Yang Jiechi.
The new defence minister, meanwhile, is expected to meet his Indian counterpart Nirmala Sitharaman during her visit to China next month.
Significantly, the new State Councillor Wang had adopted a tougher stance than his then boss Yang during the two-and-half month-long Doklam crisis last year. A fluent speaker of Japanese and English, Wang visited India last December for the Russia-India-China trilateral meeting, when he met External Affairs Minister Sushma Swaraj. That was after he cancelled a scheduled visit last April after China lodged its protest against the Dalai Lama’s trip to Arunachal Pradesh.
Swaraj is expected to meet Wang again in her trip to China in April, in a bid to restart high-level exchanges in the coming months, including Prime Minister Narendra Modi’s visit to Qingdao for the Shanghai Cooperation Organisation summit.
With Xi Jinping building a new Cabinet for his second term, Wang’s proximity to the Chinese President is said to have increased over the last two years, and he is often seen as articulating his leader’s position on a host of issues. A career diplomat, Wang served as China’s Vice Foreign Minister, China’s Ambassador to Japan and Director of the Taiwan Affairs Office.
Last July, Wang claimed that India “admitted” to entering Chinese territory and said the solution to the Doklam standoff was for its troops to “conscientiously withdraw” from the area in the Sikkim sector. But Wang later tried to advocate peace, calling on India and China to shed their “confrontationist stance”. “The Chinese dragon and Indian elephant must not fight each other but dance with each other,” he had said, adding “if China and India are united, one plus one is not equal to two but eleven”.
Titled “silver fox” by Chinese state media due to his looks and diplomatic wiles, Wang, 65, would also continue to head the Foreign Ministry, becoming the first Chinese official to hold the dual post in recent years. Wang’s name for the post of State Councillor and Foreign Minister was endorsed by the parliament, the National People’s Congress, state-run Xinhua news agency reported. Wang succeeds Yang Jiechi, 67, who last year has been elevated to the CPC’s Politburo.
Chinese Foreign Ministry spokesperson Hua Chunying told reporters that one has to wait and see whether Wang would take over as the Special Representative for the India-China boundary talks. “As who will be special representative we will wait and see,” she said when replying to a question. Asked what happens to Yang Jiechi, Hua said being a Politburo member, Yang “will continue to play a role in China’s diplomacy”.
The new defence minister, Lt Gen Wei Fenghe, 63, was the last commander of China’s missile unit, the Second Artillery Corps, before it was split into two — the People’s Liberation Army (PLA) Rocket Force and the Strategic Support Force.
The South China Morning Post had recently reported that “Wei was the first PLA department head to not only promise to support Xi’s unprecedented military overhaul from the very beginning, but also to proactively meet Xi, who is also the CMC chairman”.
Wei joined the Second Artillery Corps in 1970 when he was just 16. He learnt rocket engineering at a missile school under the Commission for Science, Technology and Industry for National Defence. He went on to train as a strategic missile commander at the Second Artillery Corps’ college in Wuhan.
For all the latest World News, download Indian Express App
Publicado por salud equitativa en 4:05