Chinese Foreign Minister Wang Yi, speaking on the sidelines of an annual meeting of China's parliament, said China and the United States did not have to be rivals, and history showed that trade wars were not the correct way to resolve problems. 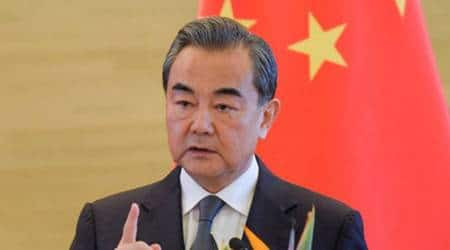 Chinese Foreign Minister Wang Yi (Files)
China will make a necessary response in the event of a trade war with the United States, Foreign Minister Wang Yi said on Thursday, while warning that such a war would only harm all sides. US President Donald Trump is expected to establish tariffs of 25 percent on imported steel and 10 percent on imported aluminium this week, but the White House has said there could be a 30-day exemption for Mexico and Canada and some other countries based on national security. Such a move aims to counter cheap imports, especially from China, that Trump says undermine US industry and jobs.
His administration has faced growing opposition to the tariffs from prominent congressional Republicans and business officials worried about their potential impact on the economy.
Wang, speaking on the sidelines of an annual meeting of China’s parliament, said China and the United States did not have to be rivals, and history showed that trade wars were not the correct way to resolve problems. “Especially given today’s globalisation, choosing a trade war is a mistaken prescription. The outcome will only be harmful,” Wang said. “China would have to make a justified and necessary response,” he said.
Wang said China had a long way to go on its path of modernisation, and that it “will not and need not displace the United States”.
Trump addressed trade with China in tweets on Wednesday, demanding that it lay out plans for reducing its trade surplus with the United States by $1 billion, which appeared to have been raised during a meeting with a top Chinese official last week. “China has been asked to develop a plan for the year of a One Billion Dollar reduction in their massive Trade Deficit with the United States,” Trump tweeted, without saying where the message had been conveyed.
China ran a record goods trade surplus with the United States last year of $375.2 billion.
Frozen mechanism
Trade tensions between the world’s two largest economies have risen since Trump took office in 2017, and although China only accounts for a small fraction of U.S. steel imports, its massive industry expansion has helped produce a global glut of steel that has driven down prices.
Trump is also considering potential trade sanctions against China under a “Section 301” investigation into its intellectual property practices and pressure on foreign companies for technology transfers.
Diplomatic and U.S. business sources say the United States has all but frozen a formal mechanism for talks on commercial disputes with China because it is not satisfied it has met its promises to ease market restrictions.
China’s latest trade date released on Thursday showed its February exports rose 44.5 percent from a year earlier, beating market expectations, while imports grew 6.3 percent.
That left it with a trade surplus of $33.74 billion for the month.
China’s trade performance rebounded in 2017 and logged a strong start this year thanks to robust demand at home and abroad.
But the rapidly escalating trade tensions with the United States are clouding the outlook for exports, while a cooling property market may curb domestic demand for imported raw materials such as iron ore.
For all the latest World News, download Indian Express App
Publicado por salud equitativa en 5:04