An unlikely rainbow | The Indian Express

An unlikely rainbow | The Indian Express 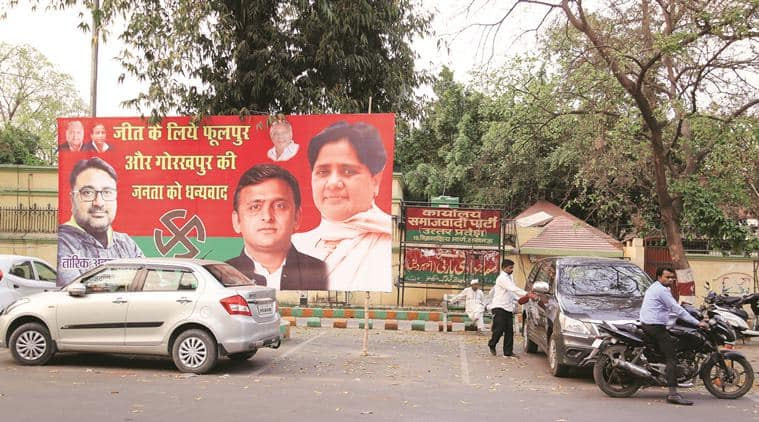 A hoarding featuring BSP supremo Mayawati and SP chief Akhilesh Yadav outside the SP office in Lucknow, following the bypoll result (PTI)
In Phulpur constituency, there is a village named Saathar. I was roaming the area to gauge the reaction of people to the by-poll results in UP last week. A man standing at a tea shop pointed towards a mound and said “once it was the fort of a king who was very popular among his subjects. He decided not to collect taxes. After some time, one of his ministers suggested that the king rescind his decision. The day the king re-imposed the tax, a cat ran out from the fort. People asked her ‘why are you running out?’ She replied ‘I am annoyed with the king because he imposed taxes on poor people’. She added that after a few years this fort will turn into a mound.” If we transpose this story onto last week’s results, the question arises: “Who deserted the BJP and why?”
The Samajwadi Party (SP), supported by the Bahujan Samaj Party (BSP), won the Gorakhpur and Phulpur seats. Political analysts did anticipate the BJP’s loss in Phulpur but most of them had felt that the party would continue its hold on Gorakhpur. But the SP’s Praveen Nishad defeated the BJP’s Upendra Shukla by 21,881 votes. Nagendra Singh Patel of the SP defeated the BJP’s Kaushalendra patel by 59,460 votes in Phulpur.
Most analysts felt that though the arithmetic in the two constituencies favoured the SP-BSP pact, they did not foresee the OBCs and the SCs coming together. The two parties have a rivalry that dates back more than 20 years. However, within a week of the announcement of the alliance, there was vibrant chemistry between the cadres of the two parties. The SP tried to give space to BSP leaders, cadres and flags during the campaign. BSP cadres worked hard to mobilise their supporters to vote for the SP candidates. I asked an old, illiterate person — also an SC — at Phulpur : “Which party did you vote for?” When he replied, “cycle (the SP symbol),” I enquired the reason for his decision. He replied: “Behen ji ne kaha tha” (Behen ji instructed us). I asked him how he knew that Mayawati was supporting the SP? He replied, “akhbar mein nikala tha” (it was published in the newspaper). It is interesting that the message reached my illiterate interlocutor through muhamuhi (oral circulation) in his basti. BSP’s support to the SP also made the Muslims confident about the chances of the party’s candidate. They voted for him instead of the independent, Atiq Ahmed. The SP-BSP pact, therefore, resulted in a broader social pact in both the constituencies.
In Gorakhpur, Praveen Nishad, son of Sanjay Nishad, president of the Rashtriya Nishad party, got the support of the Nishads — a community with a significant numerical presence in the constituency. He also got the support of Yadavs, Sainthwars, Dalits and Muslims. But Gorakhpur is known as UP Chief Minister Yogi Adityanath’s stronghold. He has developed an equation with people of different castes and communities in the constituency. The result suggests that caste identity has trumped the politics of personal contact. It can also be read as the retreat of Hindutva and a reassertion of caste identities.
BJP cadres and voters were also disillusioned with the party for several reasons. The UP CM believes that overconfidence of the BJP’s workers and supporters meant that they did not turn up at the polling booth on the polling day. Whatever be the reason, areas known to be the stronghold of the BJP, especially urban areas, did see low voter turn out. The SP and the BSP have strong influence in the rural areas of both constituencies. OBCs and SCs together constitute more than 60 per cent of Phulpur’s population. The MBCs, who form a numerically significant part of the population in this constituency, moved from the BJP to the SP.
In Phulpur, a large section of Brahmin voters, known to be BJP supporters, were disillusioned with the party. Some of them could have voted the SP to assess its strength vis-a-vis the BJP. Local factors including caste rivalry could also have contributed to the result. The students and the youth are active on social media and play a significant part in influencing voter opinion. Growing joblessness could have disillusioned them with the BJP. The success in Gorakhpur and Phulpur could make the BSP and SP work towards an alliance for future elections. It’s the BJP that needs to create a condition in which the cat of the folktale will not desert the fort.
The writer is professor at Govind Ballabh Pant Social Science Institute, Allahabad
For all the latest Opinion News, download Indian Express App
More From Badri Narayan