Print | Send by email
This article is part of a series of stories and op-eds launched by IPS on the occasion of World Water Day on Mar. 22. 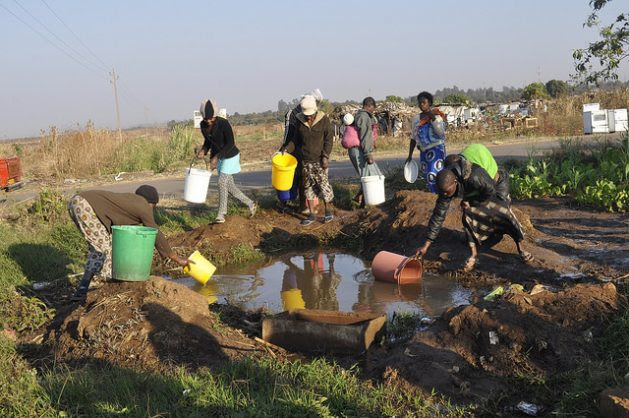 Whether they like it or not, many Africans faced with the possibility of having to access water through prepaid meters have resorted to unprotected and often unclean sources of water because they cannot afford to pay. Credit: Jeffrey Moyo/IPS
UNITED NATIONS, Mar 22 2018 (IPS) - As old and new challenges continue to threaten its access, the UN has dedicated the next decade in order to protect a crucial but fragile natural resource: water.
On World Water Day, the UN launched the “International Decade for Action: Water for Sustainable Development” which aims to mobilize implementation and cooperation on water issues as it relates to sustainable development.
Already, many are hopeful that the initiative will boost international commitment.
“It is an important initiative because it shines a light on water and sustainable development which came out of the Agenda 2030 and the Sustainable Development Goals (SDGs),” Global Water Partnership’s (GWP) Head of Communications Steven Downey told IPS.
Unlike the previous Millennium Development Goals (MDGs), the globally-adopted SDGs have a dedicated water goal that moves beyond issues of drinking water supply and sanitation. It includes targets to improve water quality by reducing pollution, increase water-use efficiency, implement integrated water resources management, and expand international cooperation and capacity-building.
Along with the MDGs was its own Water Action Decade from 2005-2015, which End Water Poverty’s International Coordinator Al-Hassan Adam said was insufficient.
Though such initiatives give political momentum to global water crises, it is also a time for reflection, he told IPS.
“The success of this decade depends on not repeating the same focus and messages that we had in the last decade,” Adam said.
Global Crises
Around the world, in both developed and developing countries, communities are coping with numerous dimensions of water crises.
“There’s not a place in the world that you can go to that isn’t having some kind of, if not crisis, water challenge,” Downey said.
According to a High Level Panel on Water (HLPW), more than two billion people live without safe drinking water, affecting their health, education, and livelihoods.
In the United States, the city of Flint, Michigan drew international attention when its drinking water was found to contains dangerously high levels of lead. Lead, which has a particularly damaging effect on children’s development, has threatened the health of more than 25,000 children in the area.
But unsafe drinking water is not unique to Flint. A new study found that more than 20 million Americans from California to New York used water from systems that did not meet quality levels in 2015. Contaminants found in the water included lead, arsenic, and fecal matter.
HLPW also found that approximately 3 billion people, almost half of the world’s population, are affected by water scarcity. Without action, this figure could rise to almost 6 billion by 2050, with as many as 700 million that could be displaced by severe water scarcity by 2030.
With limited water, the risk of conflicts is heightened.
While events in Syria have sparked fears about water scarcity driving civil war, tensions have been brewing in northeastern Africa over an Ethiopian mega-dam.
The Grand Ethiopian Renaissance Dam (GERD), being built on the Nile river, is set to be Africa’s largest hydroelectric power plant, which will boost Ethiopia’s energy production and economic growth.
Approximately 70 million Ethiopians lack access to electricity and one-third of its population live below the global poverty line.
With the energy-producing dam, industries and employment will be able to flourish, which will be crucial as Africa’s population is estimated to double by 2050.
However, the project is threatening to spark a geopolitical war over water between Ethiopia and Egypt, which has long relied on the Nile river.
The Nile supplies nearly 85 percent of all water in Egypt. While Egypt is already expected to see water shortages by 2025, the dam could exacerbate the issue.
“Water is a security issue,” Adam told IPS. “You can’t treat [water] as a zero sum game…there is room for cooperation,” he added.

Turning to Nature, Calling for Ownership
In order to meet emerging challenges to water security, new solutions are required.
“Sustainable water security will not be achieved through business-as-usual approaches,” UN World Water Development Report’s Editor-in-Chief Richard Connor told IPS.
In the new report, Connor and the UN Educational, Scientific, and Cultural Organization (UNESCO) proposes solutions that are based on nature to manage water better.
Such nature-based solutions (NBS) use and mimic natural processes to enhance water availability and improve water quality such as soil moisture retention, groundwater recharge, and natural and constructed wetlands.
Connor noted that communities have long relied on “grey” or man-made infrastructure such as dams which will not be enough to solve water-related issues.
NBS, which include green infrastructure, can substitute or work in parallel with grey infrastructure in a more sustainable, cost-effective way, he said.
The report pointed to the success of NBS in Rajasthan, India which saw excessive logging and one of the worst droughts in its history. Using NBS, the local community was able to replenish their rivers, boost groundwater levels, and increase productive farmland.
“Without a more rapid uptake of NBS, water security will continue to decline, and probably rapidly so,” Connor said.
Adam told IPS that while NBS is important, governments must also take action and ownership in working towards water-security.
“If you say nature-based solutions and governments sign a mining contract where mining companies can pollute water with impunity…if that’s the attitude, then it’s just rhetoric,” he said.
“It’s about governments having the guts to hold big polluters accountable…if we don’t have that ownership from governments, we will end up with the same results as we had previously,” Adam added.
Downey echoed similar sentiments, highlighting that water management has to be a national priority and that all stakeholders across sectors must be involved.
“Water is linked to every sector—energy, food, health, education,” he told IPS.
For Water Action Decade, GWP has already begun a series of support programs on water-related issues, including integrated water resource management and integrated drought management.
“Water is irreplaceable…If you don’t have water, what are you going to do? You can’t go drink diesel,” Adam said.
The Water Action Decade commences on World Water Day 22 March 2018 and ends on World Water Day, 22 March 2028.
Publicado por salud equitativa en 7:01