Calls came from students hiding in classrooms and parents who were getting calls and text messages from their children. Other calls arrived from 911 operators in neighboring cities who were relaying information from calls that came into their centers. 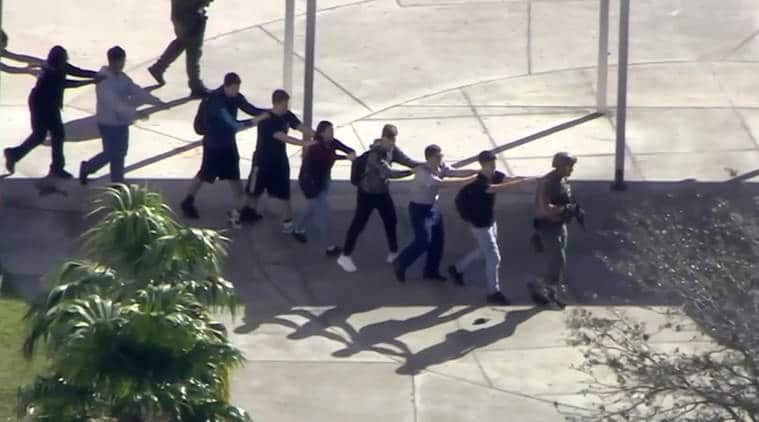 Students from Marjory Stoneman Douglas High School in Parkland evacuate the building during the mass shooting. (Photo: AP)
When emergency calls began pouring in from parents and students during the Florida high school massacre, 911 operators at first tried to grasp the enormity of the emergency and then sought to calm the callers while gathering information to assist arriving law enforcement officers.
The Broward County Sheriff’s Office on Thursday released audio of 10 of the 81 calls its 911 center received during the Feb. 14 shooting at Marjory Stoneman Douglas High School that left 17 dead and its aftermath. Calls came from students hiding in classrooms and parents who were getting calls and text messages from their children. Other calls arrived from 911 operators in neighboring cities who were relaying information from calls that came into their centers. The school is in the county’s jurisdiction.
The first calls show the operators’ confusion, such as when a male inside the school, possibly a student, whispers, “There’s shots at Stoneman Douglas, Someone is shooting up the school at Stoneman Douglas.”
“I’m sorry. I can’t hear you. What’s happening?” the dispatcher responds.
“Someone is shooting up Marjory Stoneman Douglas” he whispers. She still can’t hear him, “Hello… hello…hello.”
“Marjory Stoneman Douglas High School is being shot up,” he again whispers. The call ends seconds later.
A Coral Springs 911 operator tells another Broward operator that he was talking to a student and heard two bursts of five or six gunshots. He said paramedics were headed to the school, “but they won’t be able to go in until they are cleared to enter.”
“They are still hearing gunshots on the other calls,” the Broward operator replied, saying there is at least one confirmed victim.
But then a sense of order begins to emerge, as the Broward dispatchers begin giving instructions on keeping the students safe. Just 13 months earlier, the same 911 center had handled a mass shooting at Fort Lauderdale’s airport that had left six dead.
A male caller said, “My fiancee’s little sister just texted me and said there’s someone in here shooting guns, he’s upstairs, I’m scared. She’s in a classroom. I told her to stay safe and hide.” He asks if they are getting other calls. Yes, he is told.
“OK, damn, that’s scary. Is everyone OK?” he asks.
“They are still doing their investigation. Let her know to stay in a safe place. Have the doors closed, have them locked,” she responds.
In a call relayed from nearby Boca Raton, which lasts more than 16 minutes, a man reports information from a mother standing next to him. She is on another line with her daughter who is in a classroom with just one other girl. They have no closet or enclosed desks that can be used for hiding.
The 911 operator fruitlessly pulls information from the mother, attempting to learn what classroom the girls are in. They don’t know.
She soon instructs the man to tell the girls to remain silent and turn off their cellphone ringers in case the shooter is nearby.
“I don’t need her to make any noise. Everybody needs to be quiet in that room,” the operator said.
As the call drags on, the mother can be heard in the background encouraging the girl, who hears noises in the hallway. “I love you, I love you. It’s going to be fine if you hide somewhere. Can you play dead? You need to fake dead,” the mother tells the girl.
Seconds later, officers burst into the room and the girls are safe. The mother can be heard telling her daughter, “Tell them to pray, tell them to pray for strength.” The two girls are led out and the call ends.
The operator sighs, “`Oh my God.”
For all the latest World News, download Indian Express App
Publicado por salud equitativa en 4:42