Slave Labour, Another Setback for the Government of Brazil | Inter Press Service

Slave Labour, Another Setback for the Government of Brazil | Inter Press Service

Slave Labour, Another Setback for the Government of Brazil 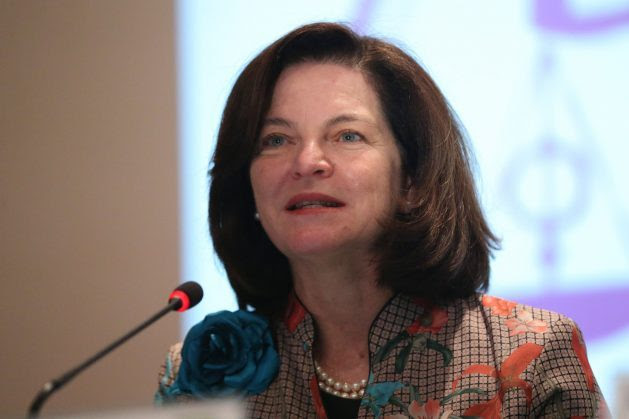 Raquel Dodge, Brazil’s new attorney general, called for the repeal of the ministerial decree that undermines the efforts to fight modern slavery. An expert on the subject, Dodge presented the legal arguments that resulted in the conviction of Brazil in the Inter-American Court of Human Rights, in 2016, for failing to adequately prevent slave labour. Credit: José Cruz / Agência Brasil
RIO DE JANEIRO, Oct 31 2017 (IPS) - The wave of conservativism is testing its limits in Brazil, as reflected by a Labour Ministry decree that seeks to block the fight against slavery-like working conditions, which has been provisionally revoked by the justice system.
The powerful “ruralist” parliamentary bloc that represents agribusiness has been chalking up victories, such as keeping Michel Temer in the presidency, despite the disapproval of more than three-quarters of those interviewed in the latest polls, who see him as corrupt and are calling for his resignation.
According to political commentators, the weakening of the fight against slave labour, by means of the Oct. 13 ministerial resolution, was aimed at ensuring the ruralist bloc’s support for the government in the lower house of Congress which, on Oct. 25, blocked by a vote of 251 to 233, the judicial process against Temer on charges of obstruction of justice and criminal organisation.
The measure could be a fatal blow to the actions of the Mobile Inspection Group which has already freed more than 50,000 modern-day slave labourers, warned Xavier Plassat, a Dominican friar who coordinates the campaign against slave labour in the Catholic Pastoral Land Commission (CPT).
The operations of the group, created in 1995 with Labour Ministry inspectors, federal police officers and prosecutors from the Labour Public Prosecutor (MPT), have already decreased sharply in recent years due to a shortage of budget and staff.
“It used to have ten teams, today there are only eight,” Plassat lamented in a telephone interview with IPS.
The ministerial decree modifies the concept of “work in slavery-like conditions,” limiting it to cases in which the worker is subjected to coercion and prevented from leaving the premises by armed guard and retention of documents, because supposedly the worker has “debts contracted with the employer.”
Other situations are now excluded from the concept and defined separately as “forced labour”, “exhausting workday” and “degrading conditions”, when imposed without the worker’s consent, made “contrary to law” and violating the rights and dignity of the person.
“The decree deconstructs the concept of slave labour, since between 70 and 80 percent of the cases recorded in the last 15 years were of degrading work, and the rest are a mixture of degradation, debt, physical control and confiscation of documents”, observed the friar who has won several awards in his fight for the eradication of modern-day slavery.
“Excluding ‘exhausting workday’ and ‘degrading work’ means ignoring three-quarters of the problem; there will be no punishment,” he argued.
The situations considered now by the Labour Ministry as modern-day slave labour were more frequently seen in activities such as deforestation, preparation of land for cattle and crops, production of charcoal and sugar-cane cutting, Plassat said.
But almost all of these activities have been mechanised, the deforestation of the Amazon has been reduced, and the use of charcoal in the production of pig iron has dropped sharply, due to a fall in international demand.
These were also some of the reasons for the decreasing number of workers freed in recent years.
From 2003 – when the National Plan for the Eradication of Slave Labour was inaugurated – to April 2017, 34,940 workers were rescued, reaching a peakof 5,610 in 2007, followed by a sustained decrease down to 742 in 2016, according to CPT data on workers who received unemployment insurance after being released from slavery.
Discovering workers enslaved in the most brutal conditions has become more difficult, because these situations have moved deeper into the Amazon, along with “the deforestation that is now selective, in smaller areas, invisible to satellites, clandestine,” said the French-born friar, who has lived in Brazil since 1989.
Complaints from tax inspectors in the Labour Ministry and from public prosecutors, judges and human rights organisations, in addition to criticism from the International Labour Organisation (ILO), forced the government to agree to review the measure.
But the temporary suspension of the ministerial decree, decided by Supreme Court Justice Rosa Weber, in response to a lawsuit brought by the Sustainability Network party, placed the final decision in the hands of the Supreme Court, which will deliberate on the validity of the decree.
The Brazilian government’s decision to change the definition of slave labour “interrupts a successful trajectory that turned Brazil into a role model and a global leader in the fight against slave labor,” and may undermine and restrain law enforcement efforts in labour, leaving “a portion of the Brazilian population even more fragile, unprotected, and vulnerable,” the ILO warned in a public statement.
The United Nations agency regretted that Brazil may move away from a definition of modern slave labour aligned with ILO conventions and the fulfillment of the Sustainable Development Goals by 2030.
In addition to narrowing the definition, the ministerial decree stipulates that the Ministry of Labour must approve the inclusion of employers found by inspectors to break the law on slave labour on a black list.
The so-called “dirty list” would thus enter into the political sphere, stripping the labour inspectors of their traditional autonomy established 126 years ago, protested the National Union of Auditors-Labour Prosecutors (SINAIT).
The measure would further hinder actions already “reduced due to a lack of resources, and to red tape,” according to Ivanete da Silva Sousa, administrative secretary of the Açailandia Centre for the Defence of Life and Human Rights (CDVDH), a non-governmental organisation that is active in Brazil’s Amazon region.

“The operations of the Mobile Inspection Group dropped from eight per year to four in 2016 and only one this year in Açailandia and nearby municipalities in which we operate,” she told IPS from that city.
The Centre continues to receive reports of forced labour, but the Mobile Group only intervenes “in exceptional cases, when there are more than 20 people enslaved,” said da Silva, an activist with the group since it was founded in 1996.
“Our focus is slave labour, but we address other violations of labour rights, we provide job training and we defend urban and rural workers,” she said.
Açailandia stands out in this field because it was a recruiting city for hard labour in the Amazon in the past decades, being located in the state of Maranhão, a major provider of farmhands, and on the border with Pará, the state with the largest number of slave-like workers.
The reduction of inspections by the Mobile Group is also explained by the decrease in complaints of places where slavery is practiced, which exceeded 100 per year at the height of Amazonian deforestation between 2005 and 2007, and fell to 16 in 2016, Plassat said.
“But the commitment to the cause remains the same among the members of the group, be they labour inspectors, public prosecutors or federal police,” she said.

The inspections were also scattered around the country. Slaves are discovered even in large cities, especially in the construction and textile industries. The state of São Paulo, the most developed in Brazil, has accounted for two percent of rescued slave workers since 2003.
Publicado por salud equitativa en 6:25