In wake of Harvey Weinstein scandal, women denounce gender inequality in the industry 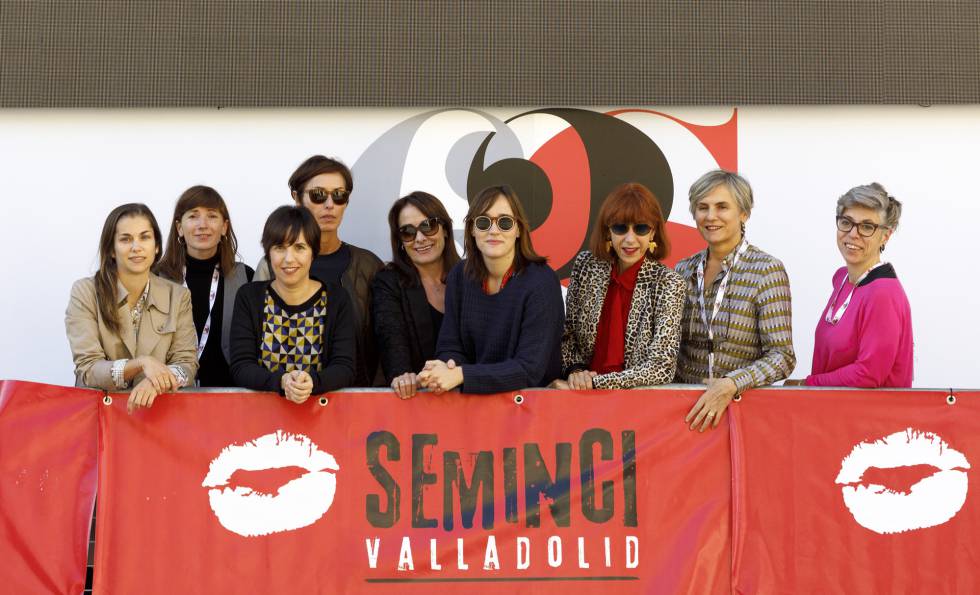 The forum held at the Valladolid International Film Week aims to combat all the issues women in the industry are facing. JAVIER ÁLVAREZ


Concern about sexual harassment of women in the movie industry has spread to Spain, following the Hollywood scandal with the powerful producer Harvey Weinstein and the silence that lead to a cover-up of his alleged sexual harassment over many years.
At a meeting held as part of the Valladolid International Film Week, women filmmakers have called for the creation of a forum to address and deal with the problems generated by possible and future cases of sexual harassment in the sector. The board of directors of the Spanish film academy has pledged to study the petition. The women’s association CIMA (Association of Women Filmmakers and Audiovisual Media), created 11 years ago, will prepare a questionnaire that will serve as a basis for a bank of possible cases of sexual harassment.
The Valladolid International Film Week is the Spanish film festival of reference in terms of equity, both in terms of the official section, where nine of the 18 films that will opt for the Espiga de Oro award are directed by women, as well as in the honorable mention category where half were directed by women. By comparison, the San Sebastián Festival had only four of 18 films directed by women, Cannes had three of 18, Venice two of 21, and Berlin four of 24.

We do not feel represented at all. Cinema reproduces stereotypes of women that aren’t real
DIRECTOR CHUS GUTIÉRREZ

The data tells an important story. According to a CIMA study, which will be presented in full in November, in 2016 only three of the 31 films that received production assistance were directed by women (Isabel Coixet, Icíar Bollaín and María Ripoll). As for other forms of aid given out in 2017, only 27.7% of ICAA funds has gone to projects presented by women – mostly low budget films or documentaries.
Gender inequality in the audiovisual industry came to the forefront at a round table discussion with representatives of the various cinema trades. Director Chus Gutiérrez said she did not know of specific cases of sexual abuse, but emphasized how women are portrayed in cinema. “We do not feel represented at all. Cinema reproduces stereotypes of women that aren’t real.” Producer Maria Zamora, responsible for titles such as Summer 1993, which will represent Spain at the Oscars, has advocated for a greater presence of women in decision-making forums and committees. “We have to be at the decision-making tables, at the festivals and television committees, in public institutions. This is where our presence is essential,” said Zamora.
Of the top ten Spanish blockbusters in 2016, none had a female writer
“Being an actor in Spain is complicated, but it’s much worse as an actress,” says actress Ana Gracia. According to a study by the Union of Actors, 60% of film roles for actors aged 35 and under are given to men, while 40% go to women. Between the ages of 39 and 45, the percentage in favor of the male actors increases to 67%. Between 45 and 64, it reaches 70%. “Women in the world of fiction do not exist in relation to our presence in society,” said Ana Gracia.
Female writers are not spared either. Of the top ten Spanish blockbusters in 2016, none had a female author. Coral Cruz, who has acknowledged that she has not been mistreated for being a woman, encouraged the writers to break the pressure that binds them to write small films. “Women are able to write stories for the general public. We should not be reduced to only intimate and low-budget films. It makes it difficult for the industry to see us as an example of profitability. We have to rely on ourselves more.”
English version by Debora Almeida.
Alicia Vikander provides touch of glamor at San Sebastian film festival