SOMETHING IS WRONG ... DO NOT YOU KNOW? ▼ Science in Spain: Why Spain’s Mar Menor is separating from the Mediterranean Sea | In English | EL PAÍS

Science in Spain: Why Spain’s Mar Menor is separating from the Mediterranean Sea | In English | EL PAÍS

Why Spain’s Mar Menor is separating from the Mediterranean Sea

20 OCT 2017 - 13:06 ART
The saltwater Mar Menor lagoon in the southeastern region of Murcia is losing its connection with the Mediterranean. Using satellite imagery, a group of researchers has found that the main natural channel connecting both seas is now 80% closed. In addition, using a marine drone, they have measured what is left of the channel. The average depth is barely 25 centimeters. If this entry point for water from the larger adjacent Mediterranean Sea closes, the change in temperature, salinity, chlorophyll levels and water clarity could compromise the future of the lagoon. 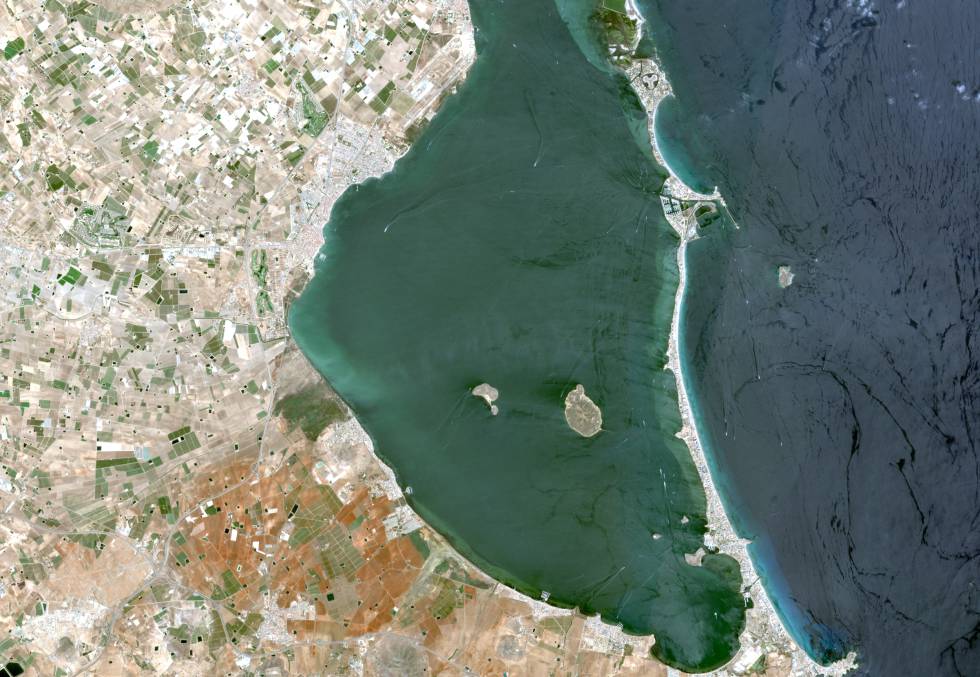 A satellite view of the Mar Menor, in the region of Murcia. SPOT


The Mar Menor is separated from the Mediterranean by a 20-kilometer long sandbar known as La Manga. There are four breaks along the barrier – a popular tourist area which is between 100 and 900 meters wide. These four channels maintain the connection between both seas and are vital for the inland sea. They regulate the salinity and the temperature of the lagoon and allow for the exchange of marine life. The channels also help to reduce the high levels of nutrients that threaten ecological viability and which would lead to an explosion of algae.
“Since 2009, Las Encañizadas, the main channel in and out of the Mar Menor, has gone from an entry size of 540 meters to 120 meters,” says Manuel Erena, researcher at the Murcia Institute of Agri-Food Research and Development(IMIDA). Half of the narrowing has occurred in the last two years. As for the depth of the canal, “we have gone from 70 centimeters to only 25,” he adds.

The diameter has gone from 540 meters to 120 meters, with half of the narrowing in the last two years

MANUEL ERENA, RESEARCHER
The closing of Las Encañizadas could complicate the lagoon’s delicate ecosystem. Intensive agriculture in the surrounding area has led to an increase in the use of fertilizers. A good part of these minerals, mainly nitrogen and phosphorus, reach the aquifers and, subsequently, the Mar Menor. Both nutrients increase the growth of invasive algae like Caulerpa prolifera and phytoplankton, which gives that greenish hue to a traditionally crystal clear lagoon.
Two other factors that end up polluting the water are the influx of tourists in the summer and the desalination plants. A lot of organic and inorganic matter ends up muddying the waters, which prevents light from reaching the plant bed, the base of the aquatic food chain. “Everything below 1.5 meters in depth dies,” says the researcher.
From May 2015 on, Erena and a group of colleagues from several Spanish and German universities have closely monitored the marine lagoon. Using a probe, they have recorded the evolution of water temperature, salinity, dissolved oxygen, suspended solids, and chlorophyll concentration, which is indicative of algae blossoms and, therefore, one of the main factors in water clarity.

Mar Menor’s ability to defend itself against human aggression completely depends on its connectivity with the adjacent sea
ÁNGEL PÉREZ-RUZAFA, PROFESSOR OF ECOLOGY

“What the study of the coastal lagoons and the Mar Menor has taught us is that its ecological state, complexity, and ability to defend itself against human aggression completely depends on its connectivity with the adjacent sea,” explains Ángel Pérez-Ruzafa, professor of ecology at the University of Murcia and president of the scientific advisory committee for the Mar Menor. “If the connection is reduced too much, it will lose its productivity and biological structure. If the communication is too strong, then these are also lost,” he adds.
However, Pérez-Ruzafa believes that the Mar Menor can be saved from being a dead sea. “It has a great capacity for self-regulation and recovery. Its maintenance depends precisely on its communication with the Mediterranean Sea not being excessive, but also not being completely lost,” he says. He adds: “If nutrient intakes are cut and indiscriminate dumping is not carried out, it will recover, as this spring and early summer has showed us. But if urgent structural measures are not taken in the lagoon, we will lose it irrevocably.”
The researchers have created a virtual tour of the area that can be seen here.
English version by Debora Almeida.
A sea of plastic along Spain’s Mediterranean coastline

The drought from hell has arrived in Spain