THE FIRES AND THE BURN OUT OF THE DAY AFTER ▼ Fires in Galicia: Solidarity after the fires | In English | EL PAÍS

Fires in Galicia: Solidarity after the fires | In English | EL PAÍS

Solidarity after the fires 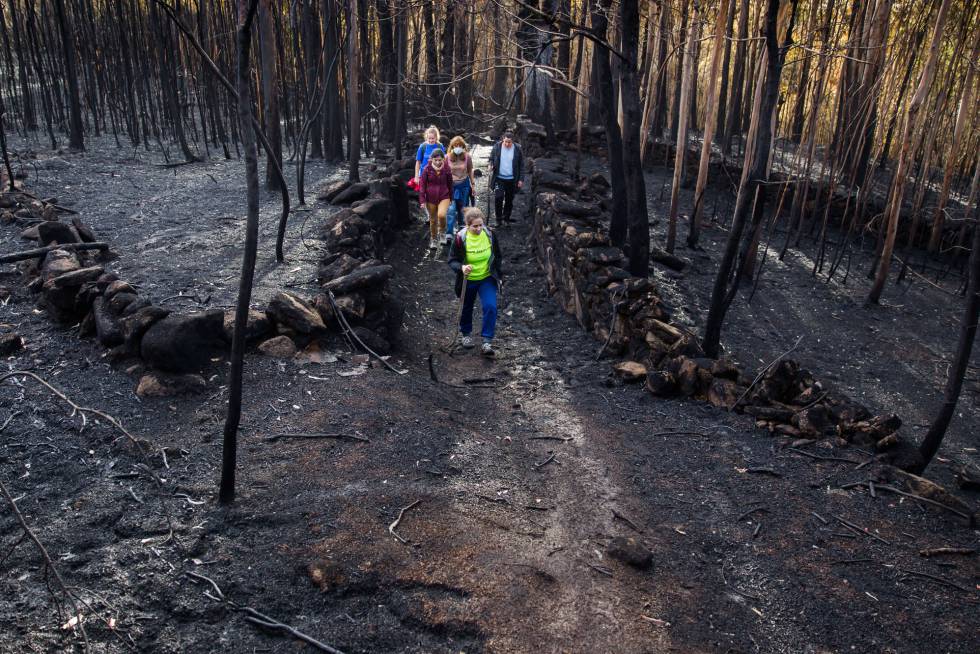 A group of volunteers walks through the forest to look for injured animals and feed any that survived the fire. OSCAR CORRAL EL PAÍS


Jose Serrano was getting into bed when the phone rang. It was his cousin Mark: “Do you not know that the town is on fire? Run!” Serrano, 83, went out wearing just his underwear to see if it was true. He couldn’t believe it because the news reports were saying the fire was 15 kilometers away. But above his house, in the tiny village of Saa, there was already a “10-meter-high flare” while “fireballs” fell like huge meteorites coming from the tops of the trees. Everything that he managed to save in a lifetime of work was consumed in half an hour.

If another 20 minutes had passed I would have been dead and instead I’m alive and I have friends
JOSE SERRANO, RESIDENT OF SAA

Carballeda de Avia, a small municipality of 1,380 inhabitants of whom the vast majority are retired, lost about 75% of its land, as well as houses, crops, and animals to the fires that ravaged Galicia, the northwestern region of Spain earlier this month. Marcelino Martínez Fernández, 78, a man in love with country life who had worked in Cuba, Holland, Switzerland and the United States, died saving his sheep.
But Serrano still has a bright smile. “How can I not be happy? If another 20 minutes had passed I would have been dead and instead I’m alive and I have friends,” he says. “I had nothing left on Monday, and today I have a three-door wardrobe full of clothes. I've never dressed so well,” he jokes, pointing to the crocodile on the front of the jacket he is wearing.
The large antique closet that he was brought now awaits its fate on the porch of his cousin Hortensia Serrano’s home. She, however, does not share his optimism. “I spend the day trembling, I am not able to do anything; this will kill me,” she cries, standing at the edge of the scorched forest just meters from her home. A family member rescued her and her niece, Carmen Levoso, who had returned from Venezuela in a wheelchair, while the other elders resisted leaving their homes, hiding from the Civil Guard in order not to be evacuated.
“If they were going to lose everything, they preferred to die,” says the mayor of Carballeda, Luis Milia. “The government did not declare a level two alert. We had to defend ourselves as best we could.” The Civil Guard told him he had to make the decision on evacuation. He says many of the older people resisted.
Solidarity emerged as soon as the fire hit. Four neighbors helped carry a man who needed a cane to walk and the houses that escaped the fire welcomed those who lost theirs. The mayor has received support from neighboring municipalitiesand from people all over Spain. “Engineers, veterinarians, and lawyers offering to process the aid,” he says, continuing with a list of people who offered help – everyone from mineral water bottling plants, to potatoes farmers, the Red Cross and clothing factories.
"Even Ikea has offered to furnish people’s homes when they rebuild,” he says.
The local government has asked for the area to be declared a disaster zone, because that is the only way to claim compensation for everything that has been lost. The charred cattle remain where they are so people can have evidence of their losses. “This is urgent and the older people aren’t up for fighting with the bureaucracy,” says Milia. “Some say, why bother asking for aid if they will already be dead by the time it arrives?”
The fire burned 3,500 hectares in Galicia
The fire laid waste to 3,500 hectares in the northeastern area of the country. Some 500 people were transported by emergency services and others escaped on foot or by car.
“It was the end of the world,” says Leontina Otero, a resident of Abelenda das Penas, where Marcelino died. “What we need here are psychologists... my granddaughter Diana, who is six years old, cannot sleep and is going to get sick with grief. She does not want to stay in her house saying that she is afraid of the black land.” Diana and her brother Hugo, four years old, live with their parents in the town of Muimenta, where today there are craters left behind by the “lava tsunamis” and “fireballs.”
“Whatever I have, you can have too,” says Leontina, who carries bags loaded up with food. “Here people have very low pensions,” explains the mayor. “They make it through the year because they raised four sheep or a pig, and they had a garden plot with onions and potatoes. It’s hard for outsiders to understand how large their misfortune is – to have lost all that.”
English version by Debora Almeida.
‘Fall from hell’ in Galicia as fires lay waste to region