Pollution or How the ‘Take-Make-Dispose’ Economic Model Does Kill 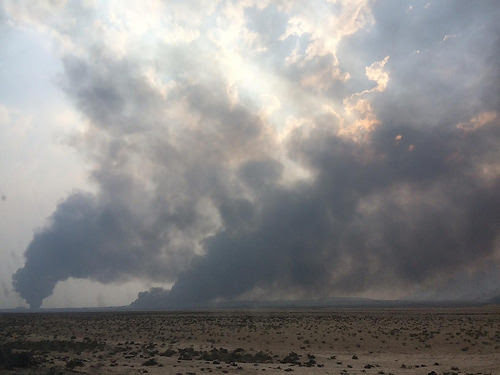 Oil fields ablaze in Mosul, Iraq. Credit: UNEP
ROME, Oct 26 2017 (IPS) - The prevailing “Take-Make-Dispose” linear economic model consisting of voracious depletion of natural resources in both production and consumption patterns has proved to be one of the world’s main killers due to the huge pollution it causes for air, land and soil, marine and freshwater.

Just to have an idea, the UN World Health Organization (WHO) estimates that nearly a quarter of all deaths worldwide, amounting to 12.6 million people in 2012, are due to pollution, with at least 8.2 million attributable to non-communicable environmental causes, and more than three quarters occurring in just three regions.
As in most other pollution-related impacts, low- and middle-income countries –those who are among the least industrialised nations on Earth– bear the brunt of pollution-related illnesses, with a disproportionate impact on children.
The latest global and regional environmental assessments give an indication of the magnitude of current threats: air pollution; land and soil pollution; freshwater pollution, and marine and coastal pollution. All this in addition to crosscutting causes such as chemicals and waste, reports the UN Environment Programme (UNEP).
As if the death of millions of humans every year due to human-made pollution were not enough, it also impacts the global economy. The UN estimates that outdoor air pollution costs about 3 trillion dollars, while the cost of indoor pollution reaches 2 trillion dollars a year.
Climate change is also modifying weather patterns, affecting the levels and occurrence of pollutants and airborne allergens, such as ozone and pollen, and in some cases exposing people to higher concentrations over longer periods than in previous decades, according to UNEP’s report Towards a Pollution-Free Planet. 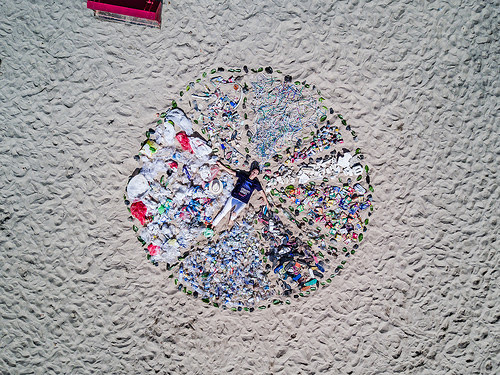 #CleanSeas. Credit: UNEP
The report provides some key examples: air quality is a problem in nearly all regions; water pollution is a major cause of death of children under five years of age; nutrient over-enrichment of land and water is causing shifts in ecosystems and loss of biodiversity; plastics in the ocean is on the rise and there is still no acceptable “storage or disposal option” for processing of older-generation nuclear fuel. See: World Campaign to Clean Torrents of Plastic Dumped in the Oceans


Here are some key details regarding the major threats caused by the prevailing linear economic model as summarised by UNEP’s Towards a Pollution Free Planet report:
Air
Air pollution is the world’s single greatest environmental risk to health. Some 6.5 million people across the world die prematurely every year from exposure to out-door and indoor air, and nine out of ten people breathe outdoor air polluted beyond acceptable World Health Organization guidelines levels.
WHO also reports that air pollution disproportionately affects the most vulnerable, including those with mental disabilities and young children.
On this, the UN Children’s Fund (UNICEF) estimates that approximately 2 billion children live in areas where outdoor air pollution exceeds the guidelines, and 300 million in areas where outdoor air pollution is at least six times higher.
In addition to the impact on human health, other air pollutants cause climate change and affect ecosystems, such as short-lived climate pollutants including black carbon and ground-level ozone, warns WHO.
The main sources of outdoor air pollution are fossil fuel emissions from coal burning for power and heat, transport, industrial furnaces, brick kilns, agriculture, domestic solid fuel heating, and the unregulated burning of waste materials such as plastics and batteries in open pits and incinerators, according to UNEP’s report.
Other important sources include the burning of peat-lands, both of which generate haze, sand and dust storms, as well as desertification, which often results from land degradation, including deforestation and wetland drainage.
The report says indoor air pollution accounts for 4.3 million deaths, 18 per cent of ischaemic heart disease and 33 per cent of all lower respiratory infections. It in particular affects women, children, the sick and elderly, and those in low-income groups, as they are often exposed to high levels of pollutants from cooking and heating.

The UN Environment Assembly, the world’s highest-level decision-making body on the environment, will gather in Nairobi, Kenya, from 4-6 December 2017 under the overarching theme of pollution. Credit: UNEP
Land and Soil


“Towards a Pollution-Fee Planet” also informs that land and soil pollution is largely the product of poor agricultural practices, inefficient irrigation, improper solid waste management – including unsafe storage of obsolete stockpiles of hazardous chemicals and nuclear waste – and a range of industrial, military and extractive activities.
“Leachates from mismanaged landfills and uncontrolled dumping of waste from households, industrial plants and mine tailings can contain heavy metals, such as mercury and arsenic, as well as organic compounds and pharmaceuticals, including antibiotics and microorganisms.”
UNEP explains that pollutants easily degrade land, soils and the underlying aquifers and are hard to remove, thus humans and wildlife living near former industrial sites and some reclaimed lands are at potential risk of continued exposure to pollution if sites are not decontaminated properly.
The primary pollutants of concern in land and soil include heavy metals such as lead, mercury, arsenic, cadmium and chromium, persistent organic pollutants and other pesticides, and pharmaceuticals, such as antibiotics used for livestock management, the report adds.
Globally, estimates indicate that at least 1 million people are unintentionally poisoned every year by excessive exposure and inappropriate use of pesticides, with health effects on all, according to UNEP.
The main driver for the use of synthetic chemical pesticides is the reduction of the negative impacts of pests, such as insects, diseases and weeds, on crop yields, estimated in the 1990s to account for 40 per cent of the world’s losses, it informs.
Women

The number of women working as pesticide applicators varies, but in some countries, women make up 85 per cent or more of the pesticide applicators on commercial farms and plantations, often working while pregnant or breastfeeding, says the report. Women are also uniquely exposed to pesticides even when they do not directly apply them.
Just a couple of examples: in Pakistan, where cotton is picked by women, a survey found that 100 per cent of the women picking cotton 3-15 days after pesticides had been sprayed suffered acute pesticide poisoning symptoms. And in Chile, in 1997, of the 120 reported pesticide poisonings, 110 were women, nearly all employed in the lower industry.
Pesticide exposure can cause lifelong harm and increase the risk of preterm births, birth defects, childhood mortality, reduced sperm function and a range of adult diseases, warns the report.
Otherwise, the rise of antimicrobial resistance as a result of overuse and improper use of antimicrobials, including antibiotics used in food production, is now a globally significant issue. See: When Your Healers Become Your Killersand What Do You Really Eat When You Order a Steak, Fish or Chicken Filet?
A major concern is that this may cause rapid changes to the microbial composition of soil, freshwater and biota, and drive the development of multi-strain microbial resistance worldwide, according to the UN Food and Agriculture Organization (FAO).
Freshwater
As if all tis were not sufficient, the Towards a Pollution-Free Planet says that freshwater bodies are heavily affected by pollution, particularly by a range of nutrients, agro-chemicals and pathogens from untreated wastewater, and heavy metals from mining and industrial effluents
Moreover, polluted water is also more likely to host disease vectors, such as cholera-causing Vibrio and parasitic worm-transmitted bilharzia.
Another scary fact in the report is that over 80 per cent of the world’s wastewater is released into the environment without treatment. Globally, 58 per cent of diarrhoeal disease –a major driver of child mortality– is due to a lack of access to clean water and sanitation.
These are just some of the major consequences of the current so-called linear economic model, which perhaps should be rather known as the relentless destruction of both nature… and humans.
Publicado por salud equitativa en 6:04