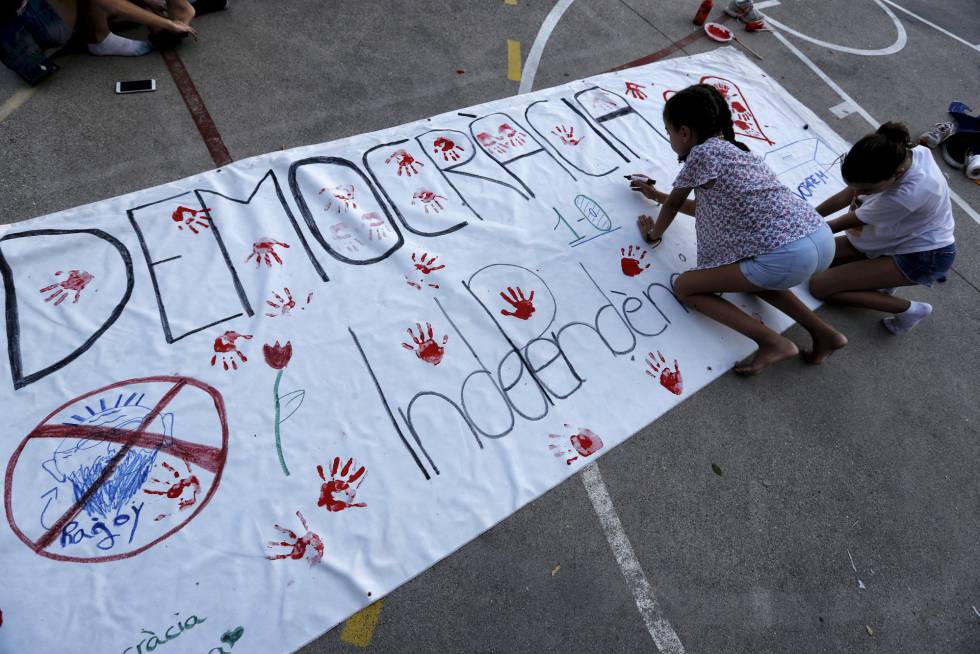 Students at a school in Barcelona in the days leading up to the October 1 referendum. CLAUDIO ALVAREZ


Student unions are planning two strike days in Catalonia, and education associations are calling for local demonstrations to ensure that the government “does not touch education.”
Since September, the Spanish Ministry of Education has sent two requests to the Catalan regional government to act against the alleged “indoctrination” going on in Catalan schools. The ministry alludes to dozens of cases, including one that was reported by EL PAÍS: at a school in Sant Andreu de la Barca, outside Barcelona, on the day after the referendum, a teacher said  to one of his high school students, the son of a Civil Guard officer: “I hope you’re happy at what your father has done.”
The Ministry of Education says that “from the classrooms and school officials’ offices, the region is allowing and encouraging the indoctrination of minors, inciting a rejection of Spain and using school hours for activities charged with political ideology.”
The Catalan chief of education, Clara Ponsatí, calls these “baseless accusations and unscrupulous lies.” A former secretary of the Catalan National Assembly (ANC), one of two major civic groups that support independence, Ponsatí plays a leading role in the independence drive. She took on the functions of school principals to exempt them from responsibility for occupying and opening schools that were used as voting centers on referendum day. She accuses the government of “insulting” teachers. The bulk of the Catalan educational community also rejects the accusations of indoctrination.
“It is impossible to maintain that indoctrination is widespread, but there are biased books,” admits Laura Vicente, a history professor at a Catalan school for almost 35 years. She denounces the “subtle” examples of manipulation in the history book she uses in class. All the texts are in Catalan “except for descriptions of historical figures like Francisco Franco or Primo de Rivera, those are in Spanish.” She has seen books that keep history “neutral” and others that teach the War of Succession and the Siege of Barcelona in 1714 “as an epic that talks of a Catalan kingdom that did not exist.”
After a complaint of manipulation in textbooks was filed by the AMES union, the ministry announced in May that an inspection would take place, but no news has emerged five months later.
A spokesman for the regional government assures that they have received no complaints and that the books are written by “history professors.” But Ana Losada, member of the Assembly for a Bilingual School in Catalonia, says that their complaints are ignored.
“Something as basic as studying in both the official languages of the state and  of the autonomous community should be accomplished,” explains Sandra Moneo, a representative for the PP party. In Catalonia, Catalan is the primary language of earning, with two hours reserved for Spanish language in elementary school, three in secondary school and two in Bachillerato, for 16-to-18-year-olds. Manel Pulido, a union representative in Catalonia, says that teachers decide which language they teach their subjects in. He personally teaches in Spanish. The Supreme Court ruled in 2015 that 25% of classes should be in Spanish.
“Of course people are indoctrinated at school,” argues María Elvira Roca, a historian and teacher. “There has been a complete and absolute distortion of facts. We now have two generations of young people raised in hatred, and let”s see how we deal with that.” Roca believes that “supremacist movements, like the Catalan independence movement, are activated through the manipulation of young people.” The students’ union strike has presented a poster with Franco, Mariano Rajoy and King Felipe VI. “Against Francoist repression,” it reads.
The president of the state’s school council, Ángel de Miguel Casas, said that he does not have “reliable knowledge” of indoctrination in Catalan classrooms, and that it would be “intolerable.” “Most teachers are very careful,” he added.
“The state is building an absolutely false story,” denounces the former Catalan education chief Ernest Maragall. Under his rule, the Catalan education law was approved with 90% political support. “The Catalan school is inclusive and respectful of plurality,” he says.

The role of inspectors is also at the heart of the debate. The High Inspection is a body of officials with two or three staff per autonomous community of Spain who report to the central government. EL PAÍS requested unsuccessfully to speak with its representatives in Catalonia. On October 17, the Ciudadanos party remained alone in Congress in its attempt to persecute school directors and teachers for “indoctrination of nationalist hatred.”
Joan Mena, a Catalan member of the Unidos Podemos party, uses himself as an example. “Thanks to immersion at Catalan public schools, this son of parents from Andalucía is bilingual and has had the same opportunities that traditionally went to the Catalan bourgeoisie. Look at how badly I’ve been indoctrinated – [so badly] that I studied and now teach Spanish Language and Literature. Such is the indoctrination in Catalan schools.”
English version by Debora Almeida.

Thousands of students march in Barcelona to defend Sunday referendum