Yemen home for the world’s worst humanitarian crisis.
UNITED NATIONS, Apr 18 2019 (IPS) - President Donald Trump’s decision to veto a bi-partisan Congressional resolution to end US military involvement in a devastating Saudi-led four-year conflict in Yemen– is expected to escalate the ongoing war in the trouble-plagued region.
The weapons used by the Saudis in the reckless bombing of mostly civilian targets, including schools and hospitals, are largely from the United States: F-15 fighter planes, Bell helicopters, drones, air-to-surface missiles, M60 battle tanks, laser-guided bombs and heavy artillery.
Trump’s veto on April 16 is expected to ensure the uninterrupted flow of American-made weapons into a war zone described by the United Nations as the “world’s worst humanitarian disaster”.
In its latest report released last month, the Stockholm International Peace Research Institute (SIPRI) said arms imports by Middle Eastern countries increased by 87 per cent between 2009–13 and 2014–18 and accounted for 35 per cent of global arms imports in 2014–18.
Saudi Arabia became the world’s largest arms importer in 2014–18, with an increase of 192 per cent compared with 2009–13.
Currently, the US is one of the largest arms suppliers to Saudi Arabia.
Citing conservative UN estimates, Ole Solvang, Policy Director at the Norwegian Refugee Council (NRC), told IPS some 17,700 civilians have been killed in the fighting since 2015.
An estimated 2,310 people have died from cholera according to the World Health Organisation (WHO), and 85,000 children under the age of five have died from starvation.
Solvang said more bombs and weapons in Yemen will only mean more suffering and death.
“By providing such extensive military and diplomatic support for one side of the conflict, the United States is deepening and prolonging a crisis that has immediate and severe consequences for Yemen— and civilians are paying the price,” he noted.
David Miliband, president of the International Rescue Committee, described Trump’s veto as “morally and strategically wrong-headed.”
This was Trump’s second veto, the first being the rejection of a bipartisan Congressional resolution aimed at overturning his declaration of “national emergency” at the southwestern border to keep immigrants and refugees from the US. 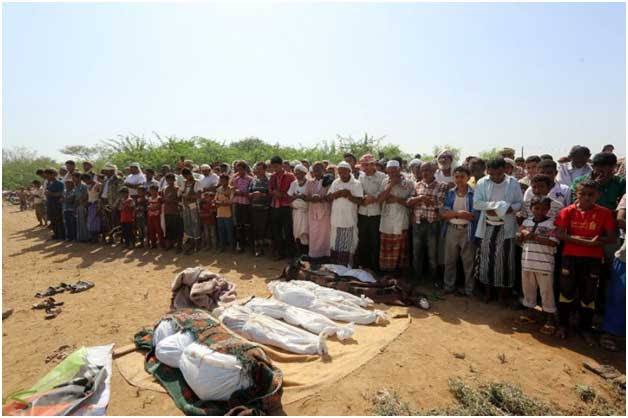 The death toll in Yemen has continued to rise.
Justifying US arms sales to Saudi Arabia, Trump has repeatedly said that if the US doesn’t sell weapons, the Chinese and the Russians will sell them.
Asked if this a valid argument, NRC’s Solvang told IPS : “I have no idea if the Chinese or the Russians would step in to replace US arms sales. As we now know, there is no shortage of countries willing to sell arms to the (Saudi-led) Coalition “ – judging by the latest revelations out of France and the previous information out of the UK.
“The argument is basically irrelevant, and avoids the question of whether the US wants to be complicit in supporting the killing of civilians in Yemen. Congress thinks the US should not be and that’s what’s important here,” he said.
Meanwhile, US arms supplies to the Saudi-led coalition are also viewed as a move directed at Iran which is allied with the Yemenis caught in the middle of a larger confrontation between Iran on one side and the US and the Saudis on the other.
Solvang said that was also Trump’s justification for the veto.
He pointed out that the US views Ansar Allah, also known as the Houthis, as an Iranian proxy force, and US aid to the Coalition is part of the wider struggle in the region against Iran.
“This is not in dispute and the analysis is enthusiastically embraced by key administration officials, such as Secretary of State Mike Pompeo, who has accused Ansar Allah of being the primary cause of the humanitarian catastrophe in Yemen.”
This does not, however, relieve the US of its obligations to do what it can to protect civilians. That includes putting as much pressure on the coalition as it can – privately and publicly – to abide by the laws of war, said Solvang.
And, ultimately, if the US sees that it is not able to shift coalition behaviour sufficiently, end the cooperation or risk becoming complicit in the abuses, these obligations are the same for all parties to the war in Yemen.
Asked about the rising casualties, he pointed out that in the first three months of this year alone, NRC’s analysis of attacks on civilians reveals that civilian casualties in Hajjah and Taiz alone have more than doubled since the Hodeidah ceasefire and Stockholm Agreement came into effect, with 164 and 184 people killed respectively.
An estimated 788 civilian casualties were reported nationwide since 18 December last year. The majority of them, 318 people, were killed by shelling. Across Yemen, a total of 1,631 houses, 385 farms, 47 local businesses and 13 schools were attacked in the same period.
Meanwhile, in a statement released April 17, the 15-member UN Security Council reiterated their call on the (warring) parties to fulfil their obligations under international human rights law and international humanitarian law, including ensuring the protection of civilians.
They expressed deep concern at the devastating impact this conflict has had on civilians, especially Yemeni children.
And they reminded all parties of their obligations towards children affected by armed conflict, and called on them to engage constructively with the Special Representative for Children and Armed Conflict to implement their commitments and obligations.
The writer can be contacted at thalifdeen@ips.org