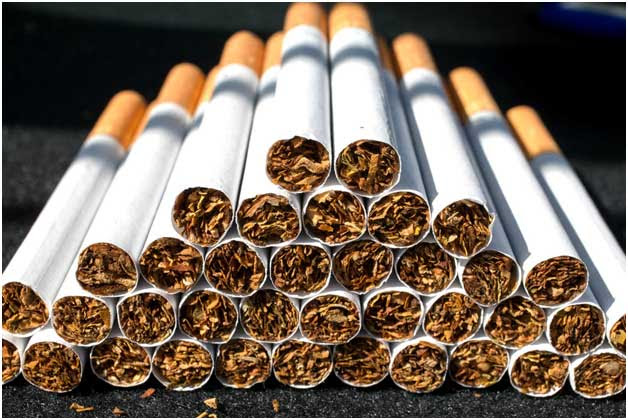 BANGKOK, Thailand, Apr 11 2019 (IPS) - The image of a smoking toddler from Indonesia horrified the world but did little to motivate local policy makers to enact measures to protect children and youth from the harms of tobacco use. Indonesia has one of the world’s highest smoking rates where two out of three men and about 40 percent of adolescent boys smoke.
Cigarette prices in Indonesia are among the cheapest in the region, where a pack of Marlboros is sold for as little as US$ 1.70, while local brands or loose sticks are dirt cheap ($ 0.05 per stick), easily affordable to the nation’s 65 million smokers.
Indonesia has a complex tobacco taxation structure of 12-tiers, dividing between machine-made white cigarettes, machine-made Kretek cigarettes, hand-rolled cigarettes, size of manufacturing factories, and more. Annual increases in tobacco tax are small, having little impact on cigarette prices to reduce consumption, especially among the poor, who form the bulk of smokers.
In 2017, the Ministry of Finance issued a Regulation on Tobacco Excise Tax to increase tax for 2018 and at the same time stipulated a roadmap for the simplification of tax tiers, reducing from 12 tiers to 5 tiers by 2021.
The tier simplification roadmap was viewed as a win for public health, as fewer tiers will close the tax and price gaps and reduce the incentive for smokers to switch to cheaper cigarettes. However, a year later, in November 2018, the simplification roadmap was suddenly revoked thereby cancelling the tax increase and tier reduction.
In his review of hundreds of news articles, Mouhamad Bigwanto, a public health researcher from the University of Muhammadiyah Prof. Dr. HAMKA, saw pro-tobacco industry groups unfold a systematic, tactical plan that led to the defeat of the tobacco tax increase and tiers simplification.
Documented in Tobacco Industry Interference Undermined Tobacco Tax Policies in Indonesia, released by the Southeast Asia Tobacco Control Alliance (SEATCA), his findings illustrate the tobacco industry’s plan to present the industry as being crucial to the economy, while simultaneously undermining and derailing the tobacco excise policy through a coordinated multi-pronged strategy.
In mid-2018, the Coordinating Ministry of Economic Affairs released a new Tobacco Roadmap on the importance of the industry. This Tobacco Roadmap was the product of Independent Research and Advisory Indonesia (IRAI), a think-tank that the Ministry engaged, whose founder and head was the former CEO of Sampoerna Foundation, the charity arm of PT HM Sampoerna, which is owned by one of the world’s biggest cigarette manufacturers. IRAI lists Sampoerna Strategic, a tobacco-related entity, as one of its clients.
The pro-industry Tobacco Roadmap rationalizes the importance of the tobacco industry to the economy and argues for its protection and growth until 2045, rehashing past arguments used by the industry to oppose tobacco control.
It formed the basis to initiate and support measures to reject tobacco tax increase and simplification. The Roadmap was introduced and explained to various government departments including with the Ministry of Health.
Various pro-tobacco industry front groups were mobilized to build support and create public pressure. These groups vocalized a consistent main message that increasing tax will ruin the industry that employs 6 million workers, resulting in massive unemployment and reduction in government revenue.
The messages of these groups were all well-aligned, echoed, and re-echoed to reinforce one another. Media coverage of their messages reached a crescendo at the appropriate time. On cue, academics and research institutes generated and released evidence that rejected tax increase and tiers simplification.
A prominent religious organization which has a powerful voice in the Muslim majority country issued a clear message that the government must revoke the excise simplification plan. Champions from relevant government ministries, such as Labor and Industry, made pro-industry statements that influenced the decision-making process up to the highest executive level (President’s level). 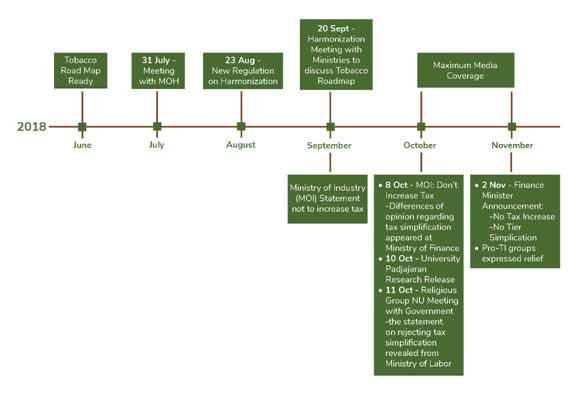 In contrast, voices from health groups supporting tax increase and simplification were less in frequency and magnitude compared to the pro-tobacco industry voices, such that at the end of 2018, following strong pressure from various pro-tobacco industry groups and institutions and systematic interference from the tobacco industry, the Government announced it will not increase the excise tax in 2019 and revoked the simplification roadmap.
The cancellation of the tax increase and annulment of the simplification roadmap show both the might of the tobacco industry in influencing policy makers and the vulnerability of the Government to industry interference.
While the tobacco industry’s strategy to defeat tax increase may not be new or novel, the willingness of policy makers to respond positively to the industry is astounding when juxtaposed against current global awareness on the harms of tobacco use.
Across the globe countries are setting target dates to become tobacco-free, but the Indonesian government is moving purposefully in the opposite direction to protect the tobacco industry for the next two decades, unmindful that about 230,000 Indonesians are killed annually by tobacco-related diseases.
Paradoxically, at high level meetings, Indonesia has committed to implement the UN Sustainable Development Goals (SDGs), which include a target to achieve health for all by reducing tobacco use.
Clearly other measures are needed to protect public health policy from being undermined by commercial interests. These include:

• Adopting a government code of conduct that regulates interactions with the tobacco industry and its affiliates to ensure transparency and prevent industry interference.
• Prohibiting institutions and individuals with tobacco industry ties from developing tobacco control policies because of their clear conflict of interests.
• Requiring political parties to disclose their funding sources as part of good governance.

*SEATCA is a multi-sectoral non-governmental alliance promoting health and saving lives by assisting ASEAN countries to accelerate and effectively implement the evidence-based tobacco control measures contained in the WHO FCTC. Acknowledged by governments, academic institutions, and civil society for its advancement of tobacco control movements in Southeast Asia, the WHO bestowed on SEATCA the World No Tobacco Day Award in 2004 and the WHO Director-General’s Special Recognition Award in 2014.