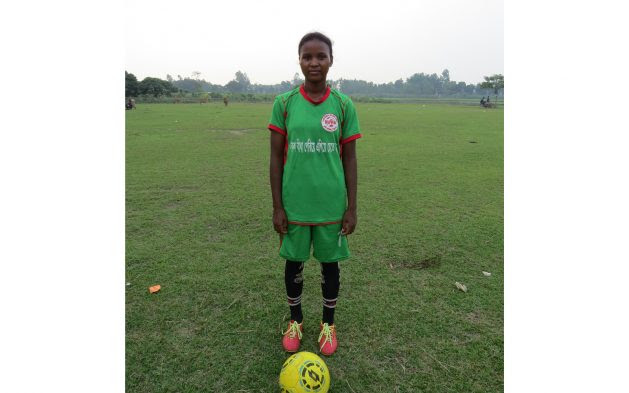 In 2014, Hanna Hemrom sought the help of her teacher who persuaded some parents to let their daughters play football. They formed the Rangatungi United Women Football Academy, which teaches football to girls, helping them feel empowered. Courtesy: Young Bangla
UNITED NATIONS, Apr 18 2019 (IPS) - For too long, women and girls have been excluded from the playing field—literally. But now, many are paving the way in the fight against gender inequality through sports.
Sports is being increasingly used as a tool for empowering girls around the world, helping challenge gender norms on and off the field.

Studies have found that promoting sports among girls can not only help improve their physical health, but also build self-esteem, courage, and leadership.
Just last month, United Nations Women and the International Olympic Committee (IOC) joined forces to host the Women and Sports Awardswhich celebrated some of the change makers who have helped advance women and girls through sport.
One such role model is Po Chun Liu who overcame numerous obstacles to become the first female baseball umpire in Taiwan and make the Forbes’ 2018 list of the most powerful women in international sports.
She continues to create opportunities for girls and women to get involved with sport, helping “strike out gender discrimination.”
“It’s our responsibility to empower girls and women so they’ll realise their full potential and take charge of their life…to help a girl is to help a family,” said Liu.
IOC’s President Thomas Bach echoed similar sentiments, stating: “Sports give girls and women self-confidence…especially in countries where women’s rights aren’t a top priority yet, there’s a tremendous benefit to women’s and girls’ participation in sport.”
“In today’s world, no organisation or country can afford to let half of the population be left behind – either in sport or in society. Advancing women in and through sport is truly a team effort. By joining hands and working together, sport can inspire the necessary change and lead the way,” he added.
In the small village of Rangatungi in Bangladesh, Hanna Hemrom is leading the way to achieve this vision.
Formed in 2014, the Rangatungi United Women Football Academy teaches football to girls, helping them feel empowered.
After only seeing boys on the field, Hemrom sought the help of her teacher who persuaded some parents to let their daughters play football.
“When the other girls and I walked from home to the football fields, people use to taunt us. They said we would not be able to get married because we wear shorts and play football. But we still carried on playing,” she recalled, adding that they struggled to persuade others to play.
But with persistence and determination, girls continue to express interest and join the team, helping transform Hemrom and her fellow teammates’ lives.
“I am a Santal girl who used to be very shy and didn’t mix with Bengali girls. Football has brought me close to other girls – Muslim, Hindu and we all play together now,” Hemrom said.
“I think football is a good habit. Earlier girls in our village used to do nothing or just talk over phone or indulge in some silly things. We now play football with the girls and boys of our village,” she added.
In 2016, the Rangatungi United Women Football team competed in the under 14 national football competition and a year later, they became the champions in the Rangpur division.
Now the girls have even bigger dreams, aspiring to play for the national team and hoping to inspire others to dream big too.
Young Bangla, the largest youth forum in Bangladesh, recognised the Rangatungi United Women Football Academy as one of the top 10 youth initiatives in the country.