Surjit Bhalla contested CMIE’s labour growth estimates by suggesting it had got the female labour participation rates wrong. CMIE explains why it is right and how demonetisation cost jobs Survey says that the female labour participation rate fell further at the rate of 1.39 percentage points per year between 2011-12 (NSSO) and mid-2016. (Illustration by C R Sasikumar)
First, I thank Surjit Bhalla for pointing an error in my comparison of CMIE’s Consumer Pyramids Household Survey (CPHS) estimates of labour market statistics with those from the National Sample Survey Organisation (NSSO) surveys. However, even after using the data he presents, it is easy to see that the fall in female labour participation rate seen in the CPHS data is broadly in line with the trends seen in NSSO data. Besides, a crucial comparison made by him to magically double the number of women employed is not kosher. We discuss this later below.
CPHS estimates are based on the status of respondents on the day of the survey. This ensures almost no recall problem. The unambiguous nature of a daily recall and the power of fast frequency surveys make CPHS an exceptionally powerful survey. It makes it possible for us to conduct natural experiments as we could in the case of demonetisation. NSSO surveys do not have a comparable measure of daily status. And, their surveys are not fast-frequency. Their measures are of principal and secondary activities based on the status over a 365- day period and a 7-day period. Their results are of annual observations.
We, therefore, do not generally try and make comparisons between NSSO and CPHS. But, comparisons are sometimes necessary and also useful. Here are some comparisons.
Consider the following: CPHS has a sample size of 1,78,000 households in comparison to NSSO’s 1,20,000. CPHS is necessarily conducted using hand-held GPS-enabled devices while NSSO surveys are done using paper with no tracking devices. CPHS data is validated 100 per cent in real-time by supervisors while the survey is being executed. NSSO validations are offline and mostly post-hoc. CPHS results are released within a few hours of the completion of the survey, while NSSO survey results are released after 6-8 months of the completion of the survey. All the record-level data and the source-code to derive the estimates is available for anyone to check the estimates. 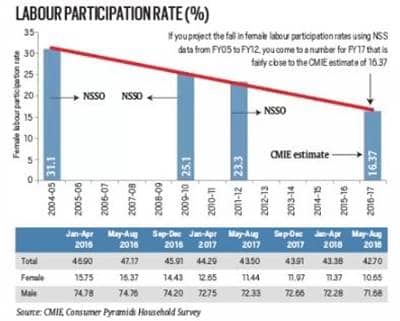