As the remnants of Hurricane Michael move across the Carolinas and Virginia, President Donald J. Trump’s focus remains on Federal support for local and state responders across the Southeastern United States.
In the past 24 hours, the President approved an emergency declaration for Georgiaand a major disaster declaration for Florida. These moves grant FEMA and the Department of Homeland Security greater latitude to mobilize the equipment and resources necessary to assist in recovery efforts in the days and weeks ahead.
“We will do everything in our power to help those in need,” President Trump said today. “And we will not rest or waver until the job is done and the recovery is complete.”
Get up-to-date information on the federal response to Hurricane Michael.

A busy day at the White House

Now 629 days since his Inauguration, President Trump continues to fight hard for the American people day in and day out. To give you an inside look at just one day’s schedule at the White House:

Video of the day

President Trump hosted some special guests at the White House today. In addition to numerous artists joining the President for the signing of the Music Modernization Act, legendary Hall of Fame running back Jim Brown and rapper Kanye West visited the Oval Office to discuss prison reform and a range of other cultural and policy issues.
Watch as President Trump hosts Jim Brown and Kanye West in the Oval Office. 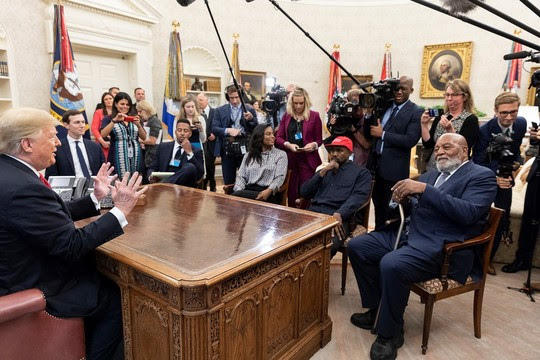