Print | Send by email
UNITED NATIONS, Oct 17 2018 (IPS) - When international parliamentarians-– both from the developed and developing world— meet in Canada next week, the primary focus would be to assess the implementation of a landmark Programme of Action (PoA) on population and development adopted at a ground breaking UN conference, led by the UN Population Fund (UNFPA), held in Cairo back in 1994. 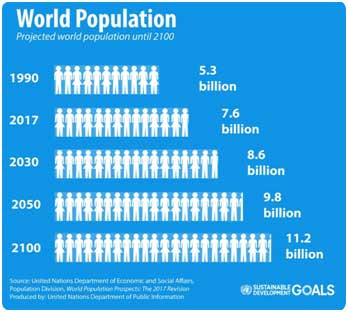 Population Growth through 2100. Credit: UN Photo
With one year to go before the 25th anniversary of the International Conference on Population and Development (ICPD), more than 150 parliamentarians will meet at a three day forum in the Canadian capital of Ottawa, October 22-24, to rate the successes and clear roadblocks, if any, to a strategy laid out more than two decades ago.


The thrust of the PoA included a commitment to reduce maternal and infant mortality, promote reproductive health and family planning, halt the spread of HIV/AIDS among women and children, as well as strengthen women’s empowerment and gender equality.
Underlying some of these issues were problems related to ageing, urbanization, female genital mutilation (FGM), midwifery, migrants and refugees, child marriages, adolescent pregnancies, the role of youth and the rising world population, which now stands at over 7.6 billion.
Besides sharing experiences, parliamentarians will also focus on the road ahead with a call for an increase in Official Development Assistance (ODA) — specifically funding for population and development which is being increasingly diverted to help finance refugee settlements.
Austria is one of the Western donors which has taken a lead role in helping developing nations reach some of the ICPD goals.
Asked about her country’s contributions, Petra Bayr, an Austrian member of parliament (MP) and chair of the Sub-Committee for Development Cooperation in the Austrian Parliament, told IPS: “As a multi-party group on Sexual and Reproductive Health Rights (SRHR), we are pushing for more funds in that important political field for many years.”
“At the moment, we are successful. For the first time in recent years, we have some extra funding to combat FGM and to support access to SRHR services in the development cooperation budget,” she added.

She pointed out that there is one million Euros (about $1.2 million US dollars) available for fighting FGM and providing family planning services, and the UNFPA is being supported with 200,000 Euros (about $232,000) in core budgeting.
“I anticipate more cooperation between the Austrian Development Cooperation and UNFPAwhich remains to be explored,” said Bayr, who is also chair of the Austrian All Party Parliamentary Group on Population and Development.
She also pointed out that the Austrian strategy on International Financial Institutions (IFI) tackles the empowerment of women and their better involvement in economic activities.
“We know that economic independence leads to increased self-determination, also in private lives, including the decision about the number and the spacing of children,” she declared.
Excerpts from the interview:

IPS: What are your expectations of the upcoming International Parliamentarians’ Conference in Ottawa? Should there be, in your opinion, any economic commitments from Western nations to meet the funding needs of some of the developing countries who have fallen behind in the implementation of the PoA?
BAYR: My expectations are focused on cooperation, exchange of strategies on how to combat the global back clash in the field of SRHR and how we can fortify our communication to strengthen women’s rights which are human rights.
Also, how to meet economic commitments governments of the global north have already signed or pledged but still not fulfilled; they should definitely be an important part of our discussions in Ottawa.
IPS: The US, which was a significant contributor to UNFPA providing about $69 million in FY 2016, has cut off all funding to the UN agency. Should European nations step in and fill this funding gap?
BAYR: I’m very grateful that the Dutch minister for Foreign Trade and Development Cooperation, Liliane Ploumen, initiated the global fund “She Decides” to curb the shortfall of about USD 600 million over the four years of Trump´s presidency and guarantee millions of women access to SRHR services.
Besides, this supports the fundamental rights of girls and women to decide freely and for themselves about their sexual lives, including whether, when, with whom and how many children they want to have. UNFPA shares the same goals, and of course, the agency´s loss should be refilled, also with funds from European countries.
The financial contribution of Austria will definitely not be enough to fill the gap but we are working hard as multi party group to push our government for more core funding for UNFPA.
IPS: As one of the key parliamentarian networks, what role does the European Parliamentary Forum on Population and Development (EPF) play in helping implement the PoA, including reproductive health, reducing maternal and infant mortality and gender empowerment?
BAYR: It’s we as legislators who decide about the laws underlying the programs that support SRHR and it is for us to ensure there is sufficient funding for these programs. As EPF has a clear focus on the rights of women and girls not only in Europe but through our development cooperation also in the global South, we have a key role to play so that women and girls can enjoy their human rights, have access to evidence based sexuality education and modern means of contraceptives, as well as medically attended pregnancies and deliveries and the economic independence to decide and self determine. EPF supports us in order to exchange good practise, take part in international discussions on SRHR and join forces to make SRHR a reality for all.
IPS: Is the widespread refugee problem in Europe hindering Europe’s ODA commitments? Is there a diversion of European funds from development financing to refugee funding?
BAYR: In general, we have witnessed a shift from fundings for development cooperation to refugee funding in Europe. I’m happy that we managed not to have this terrible involvement in Austria.
Despite the fact that our ODA is very poor, only 0.3% of the gross national expenditure (GNE) and that — already for decades — Austria extensively counts all fundings for refugee spendings in Austria into our ODA, even if this is in line with the criteria of OECD. We have to increase our ODA and dedicate it to the needs of those who are mostly in need.
If we want to achieve the spirit of the Agenda 2030 and leave no one behind, we should follow the good examples of some Nordic countries, the UK and others who show that it is possible to meet one’s international commitments by fostering the political will to do so