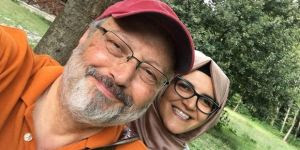 Jamal Khashoggi was beheaded and chopped into pieces with a bone saw, possibly under orders from "moderate" Crown Prince Mohammed bin Salman -- who also whips dissidents and bombs children in Yemen. It's time he pays. Arms deals are our biggest leverage over Saudi, and leaders are considering ending them right now. Let's add to mounting international pressure -- and get justice for all of the Crown Prince's victims:

Jamal Khashoggi walked into a Saudi consulate hoping for a permit to marry the love of his life -- instead, he was beheaded and chopped into pieces with a bone saw.

It's a horrific crime -- and the outrage sparked by it could be exactly what we need to make lasting change in Saudi Arabia.

Crown Prince Mohammed bin Salman has projected an image of a softer Saudi -- while bombing Yemeni children, locking up human rights bloggers...and now likely ordering the grisly murder of a journalist. He's a monster, not a moderate.

Finally, our leaders are taking notice. Germany just announced it would suspend arms sales to Saudi until the truth about Khashoggi is revealed. Arms are the world's biggest leverage over Saudi and pressure in the UK, France and Canada is mounting. If they and others follow suit, it could force Saudi Arabia to make real changes -- and maybe even push out the Crown Prince. Add your name, let's show them the world has had enough:

It's crazy that it's taken this murder to make the world wake up to Saudi brutality. But while Mohammed bin Salman has cracked down on dissent and dropped bombs on Yemen, our governments have kept selling him arms, taking his billions, and giving him red carpet treatment everywhere he goes. He's been untouchable.

Now things seem different. Even in the US, Saudi's staunchest ally, hard right-wing hawks are calling for changes, with multiple bills on the table that would impact arms sales. The pressure is getting through, with media reporting secret meetings by Saudi's ruling elites to consider the next move.


This is the moment to strike. For Jamal Khashoggi, for tens of thousands of innocent Yemenis, for jailed activists and journalists -- let's end Saudi's reign of terror. Add your name to call for justice:

End arms deals with Saudi Arabia
Our community has rallied against the Crown Prince's bloody reign in Saudi Arabia time and again. We even got the EU Parliament to support an arms ban -- but governments didn't listen. Now they're listening. Let's seize the opportunity to put an end to the devastating arms sales.

Bert, Danny, Risalat, Rosa, Will and the rest of the Avaaz team

Germany halts arms deals with Saudi Arabia, encourages allies to do the same (The Washington Post)

Turkish officials: Saudi dissident was killed, dismembered and removed from the embassy in boxes (VICE News)

Jamal Khashoggi: What the Arab world needs most is free expression (The Washington Post)