What a group of 13-year-old boys and girls may have found, what Smriti Irani cannot see
Shalini Langer

What a group of 13-year-old boys and girls may have found, what Minister Smriti Irani cannot see Years of experience have taught us to keep that secret well. Find handbags with partitions to keep a stock, put aside clothes with pockets to wear on those days, think of excuses to carry bags into loos, ensure toilets with bins to dispose of discreetly, drop our voices a few notches to talk about the same. Look around you, like the many other secrets we keep at our workplaces, we have been taught to keep it under wraps.
READ | Smriti Irani has a question: Will you take sanitary pads steeped in menstrual blood to friend’s home?
And then recently, just like that, my daughter lifted the veil. All of 13, she and her best friend ran into a bit of an embarrassing squabble with a teacher at school, who was summoned to question them after an attendant wondered what they were doing together for so long in a toilet cubicle. My daughter was trying to fix a sanitary pad for her friend. When this was followed by an emergency when they had to rush to the nurse room on finding themselves short of sanitary napkins on another occasion, the feisty two took offence, strode to the class teacher and demanded to know why, after all the “growing up” classes they had had, periods was a thing not to be spoken about.
The teacher thought about it, and decided they would have a discussion in class. A class of 15 girls and 16 boys. What followed was a heated debate, where the boys had as many questions as the girls. The girls showed them what sanitary napkins looked like, how they used them. The boys wanted to know how uncomfortable that was, and one even suggested jokingly that now he knew why his elder sister was in a foul mood some days. Another wondered aloud, setting off a round of giggles, that the pad looked like a giant diaper.
The end result of that debate was a box — the girls insisted it be beautiful — prominently placed in the classroom, to be kept stocked at all times with sanitary pads, panty liners, sweets, tissues, a manual, biodegradable mini garbage pocket packets, and hand sanitisers. The list, my daughter smiles, kept growing. The class decided that they would take responsibility for the box by turns.
The teacher was apprehensive of how the parents of the boys would take it. She was stunned by how grateful they were. The girls led the debate again, held before first the principal and then an assembly of teachers. Other classes said they wanted to emulate their example. Recently, my daughter’s class teacher informed us, some boys’ parents demanded to know why they weren’t being asked to contribute too, to keeping the “period box” stocked.
At a time when the daily wars being fought by women have burst forth onto limelight, this was just a small victory. The 13-year-olds of this class 8 didn’t climb a hill or win a right, or find God — just a teacher who let them wage a fight they wanted to fight. But in my daughter’s shiny eyes as she shared the story, and her loud voice as she spoke in front of the school auditorium, as I recalled all the times I was warned about the things I could “desecrate” (pickles, tulsi, prasad, kitchen, utensils, take your pick), as I hoped about all the things that may no longer be, who is to say there wasn’t a vision?
My daughter, not the newsiest of persons, knows about the Sabarimala row, she says. I haven’t asked how. She is 13, I am 44. She is bemoaning her first pimples, I tell a sardonic mirror I am sporting a “grey-hair look”. She is raring for fights, I sacrifice most for a good night’s sleep. In a universe that can only be Man’s creation, God is equally “threatened” by both of us.
My daughter hasn’t got around to asking me yet whether a faith should rest on keeping out menstruating girls and women. Or if a woman minister, in a government that is often befuddled by women it can’t fit into its roles (and schemes, let’s not forget the schemes) of “ma”, “behen”, “beti”, be seconding that. Judging all the weighty issues that underlie the Sabarimala matter, I would try to frame an intelligent answer. But does it have to be that difficult? What is the answer her class of 31 would throw up, you think?
And many, many years later, when this set of boys goes into the workplace, to become journalists, filmmakers, judges, priests, ministers even, can we be hopeful the story would turn out just a bit differently?
P.S.: As they navigate the treacherous pre-teen years, the above class 8 is one of the most closely knit group of boys and girls I have seen. Ms Irani, that’s what friends look like.
shalini.langer@expressindia.com
For all the latest Opinion News, download Indian Express App
More From Shalini Langer 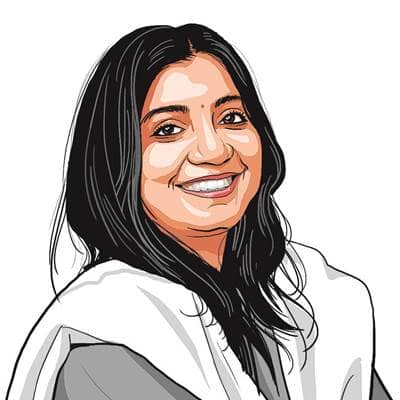