Formally launching the IMF and World Bank annual meetings on the Indonesian resort island of Bali, Lagarde urged countries to "de-escalate" trade conflicts and fix global trading rules instead of abandoning them. 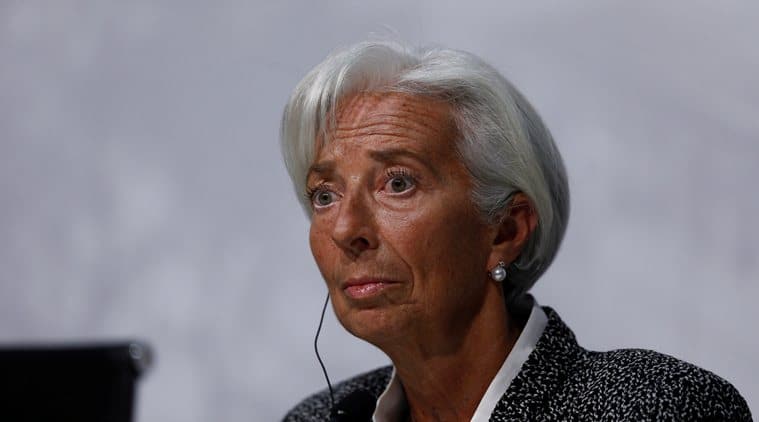 “We certainly hope we don’t move in either direction of a trade war or a currency war. It will be detrimental on both accounts for all participants,” Lagarde said. (Reuters photo)
International Monetary Fund Managing Director Christine Lagarde on Thursday warned countries against engaging in both trade and currency wars, saying these would hurt global growth and imperil “innocent bystanders.”
Formally launching the IMF and World Bank annual meetings on the Indonesian resort island of Bali, Lagarde urged countries to “de-escalate” trade conflicts and fix global trading rules instead of abandoning them.

IMF cuts world growth forecast on tariff wars, emerging market strains
The International Monetary Fund has cut its global economic growth forecasts for 2018 and 2019, saying that the U.S-China trade war was taking a toll and emerging markets were struggling with tighter liquidity and capital outflows.
The United States and China have slapped tit-for-tat tariffs on hundreds of billions of dollars of each other’s goods over the past few months, rattling financial markets as investors worry that the escalating trade conflict could knock global trade and investment.
Share markets in Asia plunged to a 19-month low on Thursday after Wall Street’s worst losses in eight months led to broader risk aversion, partly due to the heated global trade tensions as well as rapidly rising dollar yields.
“We certainly hope we don’t move in either direction of a trade war or a currency war. It will be detrimental on both accounts for all participants,” Lagarde told a news conference. “And there would also be lots of innocent bystanders,” including countries that are part of China’s supply chain.
In recent weeks, US Treasury officials have expressed concerns about China’s weakened yuan as the department prepares its semi-annual report on currency manipulation.
US President Donald Trump has accused China of deliberately manipulating its currency to gain a trade advantage, claims Beijing has consistently rejected.
Treasury Secretary Steven Mnuchin met with People’s Bank of China Governor Yi Gang on Thursday on the sidelines of the IMF-World Bank meeting.
“We discussed important economic issues,” Mnuchin said of their meeting on Twitter.
Lagarde weighed into the debate on Thursday, saying that yuan weakness against the dollar was driven by the greenback’s strength as the U.S. Federal Reserve hikes interest rates. Against a basket of currencies, the yuan has depreciated less.
“We have supported the move of China towards (currency) flexibility and we want to encourage the authorities to continue on this path going forward,” she said.
The yuan currency has faced strong selling pressure this year, losing over 8 percent between March and August at the height of market worries, though it has since pared losses as authorities stepped up support measures.
Lagarde said later that she believed Chinese authorities were taking steps to maintain growth, stability and investor confidence amid the trade conflict, but faced a “complicated” balancing act to keep its fiscal situation under control
World Bank President Jim Yong Kim also warned against an escalation of the trade row, saying that the development lender’s agenda depended on strong trade flows and that there would be a clear hit to growth if all countries followed through on their trade threats.
The meetings, attended by more than 19,000 delegates, showed no sign of disruption from an offshore earthquake early Thursday morning between Bali and Java island that killed three people and damaging some buildings.
Kim pledged World Bank support for Indonesia in the wake of a series of earthquake, including financing support for rebuilding of critical assets such as schools, hospitals and roads, as well as damaged housing settlements.