Brussels fears Italy’s instability and populism could spread to Spain 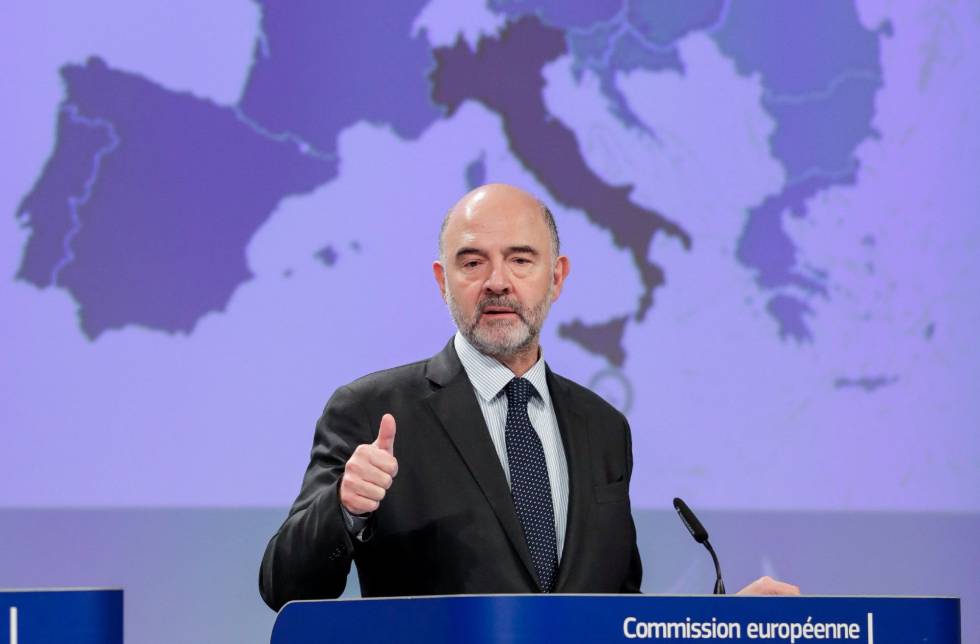 EU finance commissioner Pierre Moscovici. STEPHANIE LECOCQ EFE
The European Union, just like the markets, is ruling out a financial or budget meltdown as a result of the snap election announced in Spain for April 28. But Brussels is afraid that the euro zone’s fourth-largest economy could be affected by the same kind of political instability seen for years in Italy, which is currently led by a populist and euro-skeptic government.
The risk of seeing Spain follow in Italy’s footsteps is creating apprehension among EU institutions, which view Spain as one of the few member states that supports European integration and remains free of extremist parties.

We cannot rule out the possibility of another Italy

EU OFFICIAL
“Spain is not Italy,” said officials at the European Commission when Spanish Prime Minister Pedro Sánchez, of the Socialist Party (PSOE), took office in early June of last year, just a few days after the Five Star Movement and right-wing League formed a coalition government in Italy. Brussels made a point of underscoring Madrid’s commitment to EU rules as opposed to the constant putdowns by the Italian vice-presidents, Luigi di Maio and Matteo Salvini.
But eight months later and with Spain now poised to hold its third general election in four years, the differences with Italy are not quite as obvious to Brussels. Sánchez’s administration will set a record as the shortest-lived in the history of Spanish democracy. For the fourth year in a row, Spain has failed to meet the deadline to file its spending plan in Brussels, and for the third year in a row the previous year’s budget has been extended.
Polls suggest that the April 28 election will probably result in deadlock, with progressive and conservative parties holding a similar number of seats. And the role of kingmaker could go to Vox, a far-right party that has aligned itself with the euro-skeptic theories that are favored in countries such as Hungary and Poland.
“The most imminent risk is for Spain to get stuck after the elections if a new government is not formed quickly,” said an EU source. “In the midterm, the biggest concern is the danger that the anti-Brussels message we are seeing in so many other countries could spread there. We cannot rule out the possibility of another Italy.”
The EU remained relatively calm, and was even relieved to a certain extent, when the previous government of Mariano Rajoy, of the conservative Popular Party (PP), was brought down by a no-confidence vote led by Sánchez. Rajoy’s administration had been marked by an unprecedented territorial crisis in Catalonia, and Sánchez was benevolently received by German Chancellor Angela Merkel and by French President Emmanuel Macron. The European Commission joined the welcoming committee, giving the new Spanish government a wide margin that allowed Madrid to present a budget blueprint that boosted spending by over €5 billion.
But the most generous spending plan of the last decade has ultimately led to the demise of Sánchez’s executive. Spain’s European partners are disconcerted by this latest turn of events, as was evidenced by reactions at forums held last week in Brussels, Strasbourg and even Munich, where many EU leaders attended an annual security and defense meeting.

At all of these gatherings, the political situation in Spain was the topic of hallway talk. While concern is not yet at 2012 levels, when there was fear that the financial crisis in Spain might break up the euro zone, there are clear doubts regarding the political stability of one of the EU’s biggest members.
EU sources said that the “biggest surprise” in their view is the rapid ascent of Voxin a country that had stood out as the exception in a Europe filled with strong far-right or euro-skeptic parties. But that was until the elections in Andalusia last December, when Vox gained parliamentary representation for the first time and played a decisive role in shaping the new regional government.
In November 2018, a month before the Andalusian elections, polls were showing a national voting intention of less than 5% for Vox, a party that was virtually unknown outside of Spain. Two months later, this figure has doubled, and it is difficult to find an EU civil servant or MEP who has not heard of the party.
A fragmented parliament and the six months of inaction under a caretaker government have notably delayed Spain’s implementation of EU regulations. In 2018, it was the country with the most infringement proceedings opened by the Commission. Brussels is afraid that the April 28 election will lead to new difficulties to form a government, and therefore to fresh delays adopting EU laws.
Even so, sources at the Eurogroup – the economy and finance ministers of the euro zone – consider it very unlikely that any new government in Spain, whether right-wing or left-wing, would drastically deviate from budget discipline or from the economic reforms introduced during the crisis.
These sources are forecasting “continuity” in the macroeconomic situation, with the possibility of nuance in its more controversial aspects (such as labor reform), which is something that Sánchez himself had suggested, and which has already happened in Greece and Portugal.
The political instability could instead have a much bigger effect on Spain’s leverage in Brussels, where it has been losing clout and prestige since 2010. The fall of the José Luis Rodríguez Zapatero government after implementing an adjustment plan demanded by Berlin, the banking bailout of 2012, the six months under a caretaker government until a repeat election was held, and the territorial crisis created by the Catalan independence movement have all worked to reduce Spain’s room for maneuver in EU institutions.
This latest hitch comes at a very sensitive time in the EU, which is facing a redistribution of power due to the UK’s impending exit on March 29 and the European Parliament elections of May 26.
English version by Susana Urra.
Publicado por salud equitativa en 6:17