Malala Yousafzai said, "Everyone aware of the horrors of war would agree that retaliation and revenge is never the right response – once started, it rarely ends."

Amid the rising tension between India and Pakistan since the February 14 Pulwama attack, Pakistani activist and Nobel Prize laureate Malala Yousafzai has urged the Prime Ministers of the two countries to show “true leadership” by shaking hands to settle the current stand-off.
Malala, in a statement released on Twitter, said that “retaliation and revenge” is never the right response and the world doesn’t need another war. “As a Nobel Laureate, UN Messenger of Peace, a citizen of Pakistan and a student, I am alarmed by the escalation of tensions between India and Pakistan – and concerned for people living on both sides of the border. Everyone aware of the horrors of war would agree that retaliation and revenge is never the right response – once started, it rarely ends. Millions of people are suffering today because of existing wars – we don’t need another. Our world cannot even care for all the people currently in peril,” she said.

“I ask the Prime Minister of Pakistan Imran Khan and the Prime Minister of India Narendra Modi to show true leadership in this difficult time: to sit down, shake hands and settle the current conflict and long-standing issue of Kashmir through dialogue. I ask the international community to support talks between India and Pakistan and to help prevent loss of lives and homes,” Malala added.
The Pakistani activist also said the citizens of both countries know that the “true enemies are terrorism, poverty, illiteracy and health crisis – not each other”.
View image on Twitter 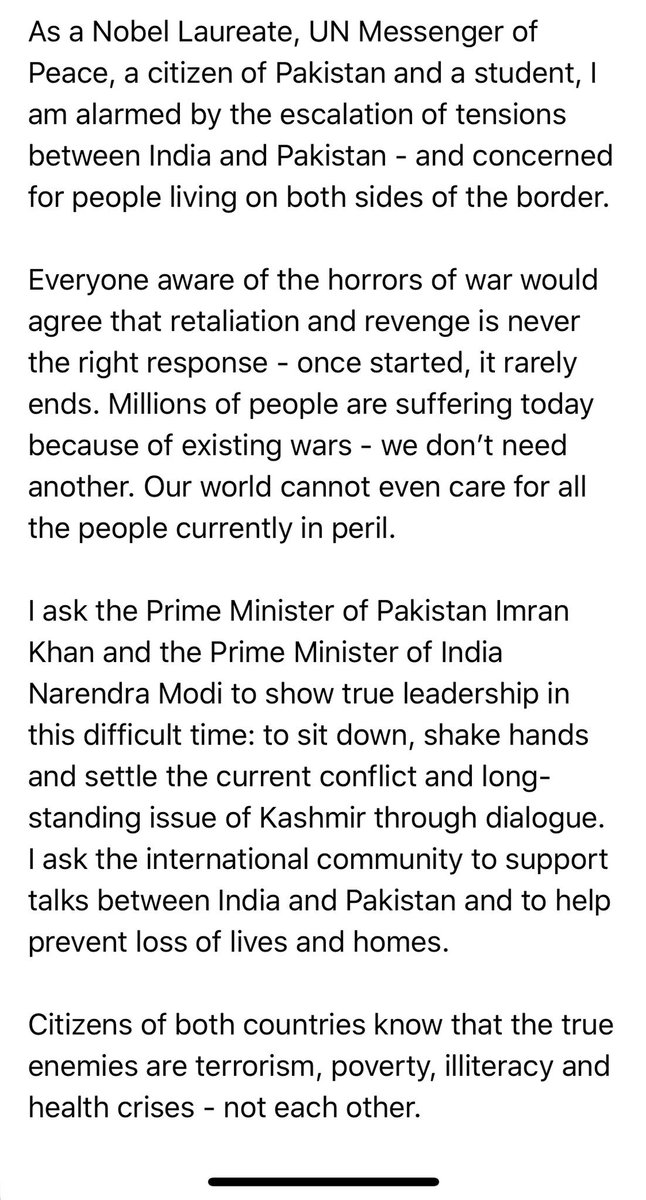 10.8K people are talking about this
Twitter Ads info and privacy
Tensions between the neighbouring countries escalated further in the last 48 hours. On Wednesday, Pakistan fighter jets entered Indian airspace to target military installations near Line of Control (LoC) but were repelled by the Indian Air Force. However, IAF Wing Commander Abhinandhan Varthaman was taken into custody by Pakistani troops after his MiG Bison was shot down by Pakistani air defence.
Hours after, New Delhi conveyed to Islamabad that “no harm” should come to the pilot, and it is learnt that the Pakistan Army has indicated it will ensure “humane treatment.”

The incursion was in response to India’s preemptive action on Tuesday, where a major Jaish-e-Mohammad (JeM) camp was destroyed in air strikes. And the air strikes were in retaliation to the February 14 Pulwama terror attack in which 40 CRPF jawans were killed in a JeM suicide bombing.
Publicado por salud equitativa en 5:10