Iran warns US, Israel of revenge after military parade attack | The Indian Express

Iran warns US, Israel of revenge after military parade attack | The Indian Express

Iran warns US, Israel of revenge after military parade attack

Thousands of people packed the streets of the southwestern Iranian city of Ahvaz to mourn the victims of Saturday's assault that killed 25 people, including 12 members of the elite Revolutionary Guards. 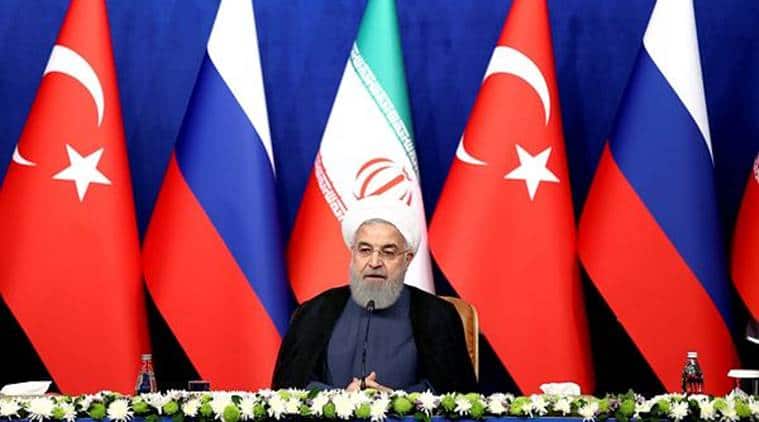 Iran has declared Monday a national day of mourning. Public offices, banks, schools and universities will be closed in Khuzestan province. (AP)
The deputy head of Iran’s Revolutionary Guards warned U.S. and Israeli leaders on Monday to expect a “devastating” response from Tehran, accusing them of involvement in an attack on a military parade in the city of Ahvaz.
Thousands of people packed the streets of the southwestern Iranian city of Ahvaz to mourn the victims of Saturday’s assault that killed 25 people, including 12 members of the elite Revolutionary Guards.
This is a modal window.

Firebrand cleric leads in Iraqi election
Moqtada al-Sadr, a powerful Shi'ite cleric who has led uprisings against the U.S., is winning Iraq's election, the electoral commission said on Monday.
The assault, one of the worst against the most powerful military force of the Islamic Republic, struck a blow at its security establishment at a time when the United States and its Gulf allies are working to isolate Tehran.
“You have seen our revenge before … You will see that our response will be crushing and devastating and you will regret what you have done,” Hossein Salami said in a speech before the funeral of the victims in Ahvaz, broadcast live on the state television.
Iran’s intelligence minister, Mahmoud Alavi, said a large network of suspects had already been arrested in connection with the attack, the judiciary’s news agency Mizan reported.
Iran has declared Monday a national day of mourning. Public offices, banks, schools and universities will be closed in Khuzestan province. Four assailants fired on a viewing stand in Ahvaz where Iranian officials had gathered to watch an annual event marking the start of the Islamic Republic’s 1980-88 war with Iraq.
Islamic State’s Amaq agency posted a video of three men in a vehicle who it said were on their way to carry out the attack. A man wearing a baseball cap emblazoned with what appears to be a Revolutionary Guard logo discussed the impending attack in Farsi in the video.
“We are Muslims, they are kafirs (non-believers),” the man says. He adds: “We will destroy them with a strong and guerrilla-style attack, inshallah (God willing).”
Ahvaz National Resistance, an Iranian ethnic Arab opposition movement which seeks a separate state in oil-rich Khuzestan province, also claimed responsibility.
Senior commanders of the Islamic Revolutionary Guards Corps (IRGC) have said the Ahvaz attack was carried out by militants trained by Gulf states and Israel, and backed by America. But it is unlikely the IRGC will strike any of these foes directly.
The Guards could put on a show of strength by firing missiles at opposition groups operating in Iraq or Syria that may be linked to the militants who staged the attack.
They are also likely to enforce a tight security policy in Khuzestan province, arresting any perceived domestic opponents including civil rights activists.