How Filling in the Agricultural Data Gap Will Fill Empty Plates 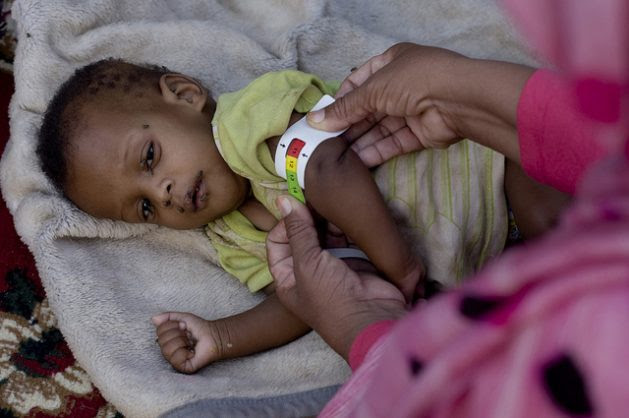 In Cameroon, a nutritionist assesses the health of a child: red indicates severe malnutrition. Credit: Kristin Palitza/IPS
NEW YORK, United States, Sep 26 2018 (IPS) - Each year as hundreds of billions of dollars are invested and critical decisions are made in agriculture, there is often little evidence or research to back these choices.
According to experts, this lack of data “leads to less than optimal decisions, causing losses in productivity, lost agricultural income, and ultimately more hunger and poverty.”
“The data gaps in agriculture are widespread, affecting 800 million, or 78 percent of the world’s poorest. The problem is especially dire in Sub-Saharan Africa, where nearly half of countries have incomplete information about the [agriculture] sector and farmers,” Emily Hogue, a senior advisor with Food and Agriculture Organisation of the United Nations (FAO), explains to IPS.
“Assessments have shown that those countries are able to meet half or less of their basic data needs, largely due to a lack of [agriculture] surveys.”

Citing the foundational role data plays in directing development efforts and monitoring progress towards the U.N’s Sustainable Development Goals (SDGs), the Gates Foundation, World Bank, FAO and others have launched a partnership aimed at investing in the agricultural data capabilities of low and middle-income countries.
Dubbed the 50 x 2030 Initiative, the plan aims to invest USD 500 million in data gathering and analysis across 50 developing nations by 2030.
On Monday, the governments of Ghana, Kenya and Sierra Leone joined the coalition in hosting an event at the U.N. General Assembly to announce the initiative. Panellists representing several of the initiative’s key partners shared the impetus behind their involvement.
Rodger Voorhies, executive director for Global Growth and Opportunity at the Gates Foundation, noted that “almost no country has come out of poverty in an inclusive way without agricultural transformation being at the centre of it.”
However, the panellists noted, the data needed to design evidence-based agricultural policy and target agricultural investments is severely deficient in many developing nations. This data gap represents a “critical obstacle to agricultural development,” according to Beth Dunford of USAID.
“There is no efficient path to meeting SDG2 or other [agriculture] development goals without improved agricultural data. Improved data will promote more effective targeting of interventions, improved national [agriculture] policies, and increased resources for the sector. As FAO is the organisation that is at the forefront of the activities to promote [agriculture] development and reduce hunger and malnutrition, we see filling in the agricultural data gap as a prerequisite to achieving agricultural development goals,” Hogue says. SDG2 is the goal to end hunger, achieve food security and improved nutrition and promote sustainable agriculture.
The 50 x 2030 Initiative’s announcement comes in the wake of the FAO’s recent revelation that world hunger has risen for a third straight year, with 821 million people worldwide facing chronic food deprivation.
Panellists emphasised that the data gap limits the ability of many nations to direct resources towards populations most in need, including smallholders affected by gender inequality or climate change.
The International Fund for Agricultural Development (IFAD) president Gilbert Houngbo, formerly the prime minister of Togo, observed that granular data could reveal regional, ethnic or gender disparities that are obscured by aggregate data. He recalled that during his time as Togo’s leader, progress in achieving inclusive poverty reduction was made more challenging because the country “did not have the disaggregated data to better adjust the implementation of our policies.”
In addition to driving better policy design and implementation, improved agricultural data will make it possible to better monitor progress in achieving the SDGs.
Claire Melamed, CEO of the Global Partnership for Sustainable Development Data, noted that many countries lack any data for several of the most critical SDG indicators, making it impossible to set a baseline and monitor progress towards the goals.
José Graziano da Silva, director general of FAO, explained that the initiative would initially focus on scaling up existing surveys of farming households. The FAO’s AGRISurvey is expected to expand to nineteen nations by 2021, and Graziano da Silva noted that this initiative would allow it to eventually expand to 50 or more. The initiative will also build upon the World Bank’s Integrated Surveys on Agriculture (ISA), part of the Bank’s Living Standards and Measurement Study (LSMS).
“The goal of this initiative is to have 50 low and lower-middle income countries (LMICs) with strong national data systems that produce and use high-quality and timely agricultural data for evidence-based decision-making. The survey programs are the vehicle through which we will build capacities and strengthen the institutions in those systems. We also aim to include the private sector, especially agribusinesses, as users and supports of these data,” Hogue adds.
Over time the initiative should allow more countries to take advantage of advances in data gathering and analytics. Laura Tuck, vice president of Sustainable Development at the World Bank, suggested that new tools for “real-time, high-definition data” would lead to smarter policies that increase sustainable food production. Tuck also noted that the structure of the 50 x 2030 initiative would allow countries the autonomy to drive their own use of data.
*Additional reporting by Carmen Arroyo in New York