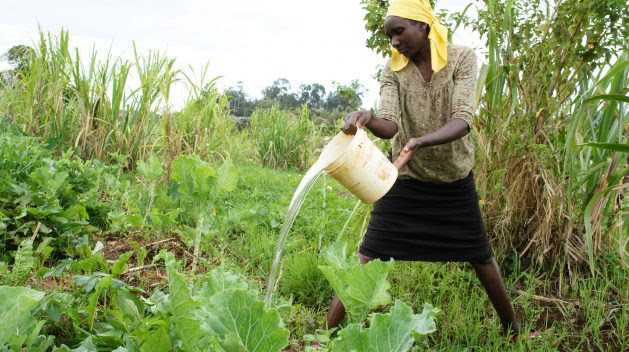 Mary Wanja, a farmer at Ngangarithi, Kenya, using water from a stream to water her produce. Food and Agriculture Organization of the United Nations (FAO) indicates that the face of farming is still very much female comprising at least 45 percent of the agricultural labour force in developing countries. In parts of Africa and Asia, women’s representation is much higher contributing at least 60 percent of the labour force. Credit: Miriam Gathigah/IPS
NAIROBI, Sep 21 2018 (IPS) - The world’s most important meeting is underway in New York, providing yet another opportunity for world leaders to discuss a wide array of issues such as peace, security and sustainable development. And experts stress that the role women have to play in addressing these issues cannot be over-emphasised.
“Of the six United Nations organs, it is only at the General Assembly where member states have equal representation with each nation having one vote, so issues discussed at the forum tend to be very critical and central to global development,” explains Grace Gakii, an independent consultant on gender issues in East Africa.
The 73rd session of the U.N. General Assembly (UNGA) is being held in New York, United States, starting on Sept. 18th and running through to October.