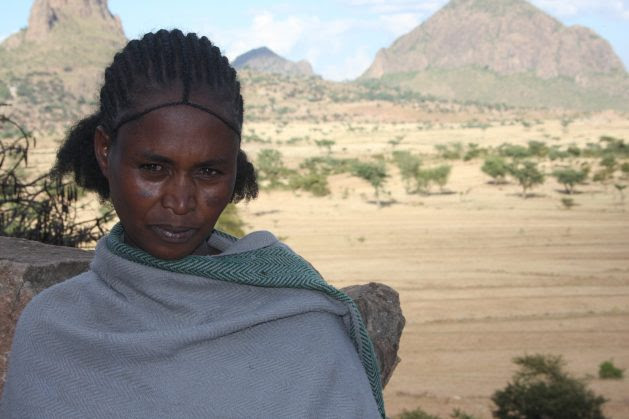 Women living in Ethiopia’s northern Tigray region, which is particularly prone to drought, say how hard it is to live off the land and support their families. Credit: James Jeffrey/IPS
ADDIS ABABA, Sep 24 2018 (IPS) - Faced with worsening droughts due to climate change, Ethiopia is joining an international initiative seeking to build global resilience against the problems caused by it, and enable developing countries to become part of a united solution to the ongoing problem.
Funded by the United Nations Framework Convention on Climate Change (UNFCCC), the Global Climate Fund (GCF) was established to help developing countries achieve national efforts to reduce national greenhouse gas (GHG) emissions and adapt to the unavoidable impacts of climate change.

The GCF is part of a united global response fuelled by the urgency and seriousness of the climate change challenge. That clarion call gained momentum worldwide after the 2015 Paris Agreement in which signatories agreed to collectively tackle climate change through the mechanism of implementing nationally determined contributions (NDC), a country’s tailored efforts to reduce its emissions and enable it to adapt to climate change-induced challenges.
Ethiopia is taking this multilateral global endeavour particularly seriously due to the massive changes the country is undergoing as it develops economically.
“Ethiopia is one of the few countries that have submitted a very ambitious and conditional NDC to the UNFCCC,” says Zerihun Getu with Ethiopia’s Ministry of Finance and Economic Cooperation. “Ethiopia aims to cut 64 percent of emissions by 2030 and build a climate resilient and middle-income economy.”
Currently Ethiopia has a relatively low carbon footprint compared to many other countries, having not industrialised, but Zerihun notes why it is important to take action now.
“Projections indicate that with population and economic growth, Ethiopia’s level of emissions will grow significantly, from 150 million tonnes in 2010 to 450 million by 2030,” Zerihun tells IPS. “Hence Ethiopia should focus both on mitigation and adaptation measures in order to reduce emission as well as build resilience and reduce vulnerability to the impacts of climate change.”
Approved in October 2017, Ethiopia’s GCF-backed project will be implemented over the course of five years at a cost of USD50 million—with USD5 million co-financed by the government—to provide rural communities with  critical water supplies all year round and improve water management systems to address risks of drought and other problems from climate change.
The funding will go toward a three-pronged approach: Introducing solar-powered water pumping and small-scale irrigation, the rehabilitation and management of degraded lands around the water sources, and creating an enabling environment by raising awareness and improving local capacity.
Guidance on the project’s implementation is coming from the Global Green Growth Institute (GGGI), a treaty-based international organisation that promotes green growth: a balance of economic growth and environmental sustainability.
Climate change has a disproportionately worse impact on the lives and livelihoods of societies which depend on the natural environment for their day-to-day needs. In Ethiopia, about 80 percent of the population remain dependent on agriculture for their livelihoods.
Those who are subsistence farmers are especially vulnerable to shifting weather patterns that can result in severe water shortages, devastating food production and livelihoods.
When such natural disasters strike, the situation of vulnerable populations can quickly deteriorate into a food and nutrition crisis, meaning the poor, many of whom in Ethiopia are women, are disproportionately affected.
This is what the Ethiopian GCF project seeks to mitigate, hence its focus on improving economic and social conditions for women.  Over 50 percent of the project’s aimed for 1.3 million beneficiaries will be women, with 30 percent of beneficiary households being female-headed.
During the past three years, regions of Ethiopia have experienced terrible drought exacerbated by the ocean warming trend El Niño that is causing unusually heavy rains in some parts of the world and drought elsewhere.
While El Niño is a complex and naturally occurring event, scientific research suggests that global warming could be making this cyclical event occur more frequently and intensely.
Despite there being some scientific uncertainty about how the naturally occurring El Niño event and human-induced climate change may interact and modify each other, Ethiopia has experienced enough climate-related trouble so that its government doesn’t want to take any chances.
Hence Ethiopia is an example of an early adopter of green growth. In 2011 the country launched its Climate-Resilient Green Economy (CRGE), a strategy to achieve middle-income status while developing a green economy.
“The government’s goal is to create climate resilience within the context of sustainable development,” says Mitiku Kassa, Ethiopia’s state minister of agriculture and commissioner for its National Disaster Risk Management Commission. “Then, one day, we will be able to deal with drought without any appeals.”
In addition to challenges posed by El Niño, most of the world’s scientific community agrees that long-term significant changes in the earth’s climate system have occurred and are occurring more rapidly than in the past.
Furthermore, continued emissions into the earth’s atmosphere are projected to cause further warming and increase the likelihood of severe, pervasive and irreversible effects on every continent, including increasing temperatures, greater rainfall variability with more frequent extremes, and changing the nature of seasonal rainfalls—all of which threaten Ethiopia’s agricultural backbone.
It’s not just scientists making such claims. Ethiopian pastoralists in their seventies and eighties who have lived with frequent droughts say the recent ones have been the worst in their lifetimes—and they aren’t alone in noticing worrying trends.
“While working in Central America, East Africa, and the Middle East, I’ve always talked to elder people, especially those in agriculture, and the message from them is consistent,” says Sam Wood, Save the Children’s humanitarian director in Ethiopia. “Weather patterns are becoming less predictable and when rain comes it is too much or too little.”
As of May 2018, the GCF portfolio has 76 projects worldwide worth USD12.6 billion with an anticipated equivalence of 1.3 billion tonnes of CO2 avoided and 217 million people achieving increased resilience.
“We’re working with GCF in Senegal and Tajikistan [and] we think their work will be vital,” the World Food Programme’s Challiss McDonough tells IPS. “WFP’s goal of ending hunger cannot be achieved without addressing climate change.”
But the GCF can only do so much. The overall bill just for empowering Ethiopia to effectively respond to climate change is estimated at USD150 billion, Zerihun notes, a sum that can only be achieved through “huge investment.”
“Ethiopia allocates its domestic resources for climate actions [but it] should also mobilise support from international communities including the GCF to realise its vision and achieve its NDC targets,” Zerihun says. “The GCF will make a significant contribution to Ethiopia’s vision through financing projects and programmes as well as through helping Ethiopia build capacity to mobilise other climate finance sources and leveraging other investment.”