The Future of Urbanism: Is the UAE Pioneering it? | Inter Press Service

The Future of Urbanism: Is the UAE Pioneering it? | Inter Press Service

The Future of Urbanism: Is the UAE Pioneering it?

Masdar City in Abu Dhabi. Credit: Masdar
ABU DHABI, UAE, Feb 22 2019 (IPS) - According to data from the UN Development Programme (UNDP), the Arab world is one of the most urbanised areas in the world, with more than 70 per cent of the population of the six-member Gulf Cooperation Council (GCC)— Bahrain, Kuwait, Oman, Qatar, Saudi Arabia, and the United Arab Emirates (UAE)– living in urban areas.
In 2018, about 93% of the population of the UAE lived in urban cities – and it is expected to continue rising in the coming years. Dubai, the largest city in the country, has a population of over 3 million people, one-third of UAE’s 9.3 million, and is expected to double by 2027.
As the country’s cities continue to expand and grow, the challenge of civic authorities to provide adequate living conditions, water, sanitation, public transportation, and waste management features becomes more important to address.
“One of the direct results of the increase in UAE’s population, nearly all who live in urban cities, is the huge expansion in construction, facilities, and infrastructure,” says Habiba Al Marashi Chairperson of the Emirates Environmental Group (EEG), one of the most active non-government organization (NGO) based in the UAE.
“While construction is a major contributor to UAE’s economy, it is also amongst the most resource intensive sectors. Thus, growing cities such as Dubai need to plan along sustainable lines in order to reduce their negative environmental impacts and natural resource depletion,” she adds.
EEG mounted an awareness campaign to popularize the concept of green buildings in an environment that was still unfamiliar with the imperative for sustainable development and energy transition several years ago.
And Al Marashi states that a change – an understanding of the importance of sustainability – has begun to roll out.
The UAE sits on eight percent of the world’s oil reserves, meets most of its energy demand through fossil fuels, and has had a history of having one of the largest carbon footprints in the world but it seems to now be taking active measures to change this.
In 2017, during the World Future Energy Summit in Abu Dhabi, the country announces its intentions to transition to at least 44% renewable energy by 2050.
“Our aim is to balance our economic needs with our environmental goals,” Sheikh Mohammed bin Rashid Al Maktoum, UAE prime minister and ruler of Dubai, said on Twitter to accompany the announcement. “The plan aims to increase usage efficiency by 40 percent and increase clean-energy contributions to 50 percent.” 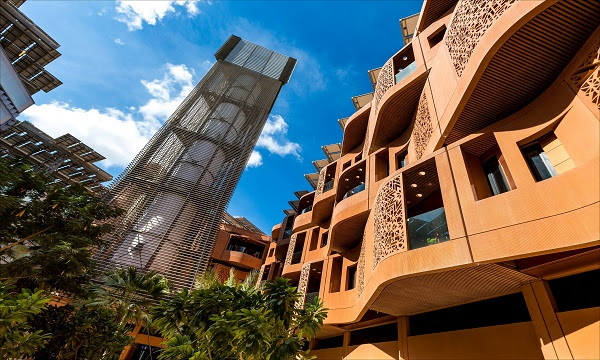 Masdar City in Abu Dhabi. Credit: Masdar
This includes making sustainable development one of the key goals of its ‘Vision 2021’, including a focus on ‘green’ urban development.
“Cities are at the heart of any country’s development and define the direction of its growth and innovation and this is especially relevant in the Arab world where nearly all people are urbanized,” explains Al Marashi. “And the the future of urbanism is in sustainable cities and UAE wants to be a pioneer.”
Masdar City in Abu Dhabi is one of UAE’s most ambitious sustainable urban development projects that was built to be amongst the world’s “most sustainable developments” and “serve as a green-print for the sustainable development of cities through the application of real-world solutions in water, energy efficiency and the reduction of waste.”
The residential and retail development that is housing thousands was developed by Masdar, a renewable energy company based in Abu Dhabi, to be one of the region’s first entirely sustainable, mixed-use, low-carbon development that relies on solar and other renewable energy sources.
It is also home to Masdar Institute, the Gulf’s first research institution dedicated to advanced energy and sustainable technologies that, to date, has secured 14 US patents.
One of Masdar’s projects, in cooperation with Bee’ah, is spearheading waste-to-energy production in Sharjah that is currently generating enough power to supply to 28,000 residential complexed. Due to the facility, the rate of diversion of waste from landfills has gone up from 20% in 2009 to 70% in 2016.
The project’s goal is to eventually reduce the Sharjah’s landfill contribution to zero.
And on-site in Abu Dhabi, Masdar has developed a residential eco-villa, which aims to consume 35 percent less water and 72 per cent less power than a typical villa of the same size.
The prototype is being monitored for its energy, water, and waste management performances and the data will then be used to refine the eco-villa to support the eventual commercialization of the building concept.
Abu Dhabi also has a mandatory sustainable development framework for all its buildings. Developed by the Abu Dhabi Urban Planning Council (UPC), Estidama, Arabic for “sustainability’, was introduced in 2009 and was amongst the first sustainability initiatives in the region.
The framework establishes a clear vision for sustainability as the foundation of any new development occurring in UAE’s capital.
Estidima imposes sustainability requirements in the planning process and imposes a green building code with the classifies development projects under a ‘pearl’ rating system. All public buildings must have a minimum two pearl rating and all other new buildings must meet a minimum one pearl rating criteria.
“Right now, the focus of Estidama is on new developments, however, there are talks – and we are hoping – that it will be expand to include already existing buildings be retrofitted to meet the new standards,” says Al Marashi.
Dubai’s municipality also introduced its ‘Green Buildings Specifications’ in 2011 which were immediately mandatory for all new government buildings and then, in 2014, became a prerequisite on all new building developments.
“In practice this means goals of reducing energy and water consumption, the use of environment-friendly materials, renewable energy characteristics, alternative energy sources and increased efficiency,” says Al Marashi.