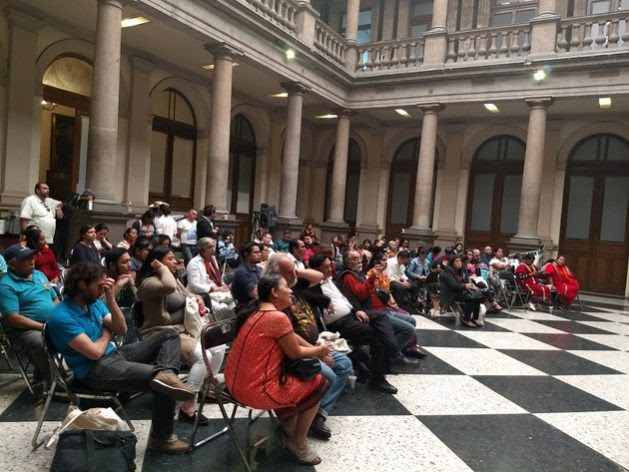 Some 50 human rights defenders from Latin America held a meeting at the Journalists Club in Mexico City to exchange strategies and analyse the challenges they face in the most lethal region for activists. Special rapporteurs on indigenous peoples, displaced persons and freedom of expression attended the meeting. Credit: Emilio Godoy/IPS
MEXICO CITY, Feb 20 2019 (IPS) - “We’re in a very difficult situation. There is militarisation at a regional level, and gender-based violence. We are at risk, we cannot silence that,” Aura Lolita Chávez, an indigenous woman from Guatemala, complained at a meeting of human rights defenders from Latin America held in the Mexican capital.
The Quiché indigenous activist and leader of the K’iche’s People’s Council for the Defence of Life, Mother Nature, Land and Territory, told IPS that the Guatemalan government “has said that we are violent trouble-makers, but we defend our territory and we say no to the mining companies.”
Chávez, who was a finalist for the European Parliament’s Sakharov Prize for Freedom of Thought in 2017, and winner of the Ignacio Ellacuría Prize of the Basque Agency for Development Cooperation that same year, is an organiser of the opposition by native communities in western Guatemala against mining companies, hydroelectric dams and African oil palm producers.
She has received death threats and attacks that forced her to seek refuge in Spain in 2017.
But her case is far from an exception, in Guatemala and in the rest of Latin America, the most lethal region for human rights defenders according to different reports, especially activists involved in defending land rights and the environment.
In this increasingly alarming context, Chávez and some 50 activists from Brazil, Colombia, Guatemala, Honduras, Mexico, Nicaragua, the United States and Uruguay participated in the International Meeting of Human Rights Defenders and Journalists in Mexico City from Feb. 15-18, under the slogan “Defending does not mean forgetting.”
Guests at the meeting were United Nations Special Rapporteur on the Rights of Indigenous Peoples, Victoria Tauli-Corpuz from the Philippines; UN Special Rapporteur on the Human Rights of Internally Displaced Persons, Cecilia Jiménez-Damary from the Philippines; and the Inter-American Commission on Human Rights (IACHR) Special Rapporteur on Freedom of Expression, Edison Lanza from Uruguay.
The human rights defenders identified common threats such as interference by mining and oil companies in indigenous territories, government campaigns against activists, judicial persecution, gender-based violence, and polarised societies that often fail to recognise the defence of human rights.
Evelia Bahena, an activist from the southern Mexican state of Guerrero, told IPS about “the suffering and destruction” at the hands of “companies that make profits at the cost of the lives of others.”
In the municipality of Cocula, Bahena has fought against mining projects, which drew threats and lawsuits against her, forcing her to flee her community – a common fate for activists struggling against mega-projects that harm the social fabric and natural resources of the villages and towns where they are built, and the rights of local residents. 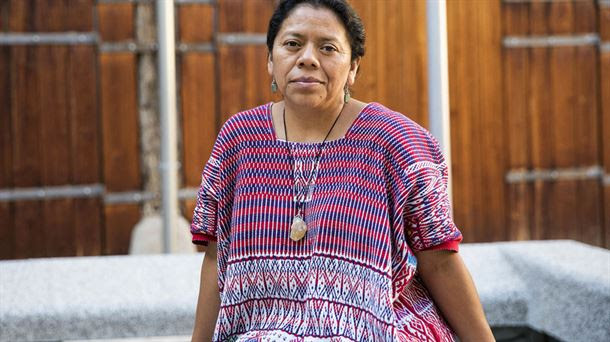 Award-winning Guatemalan indigenous activist Aura Lolita Chávez, leader of the K’iche’s Council of Peoples, has been forced to seek refuge in Spain because of death threats and attacks, due to her struggle against the activities of companies that affect the environment and indigenous territories in her country. Credit: Courtesy of ETB
A number of reports have focused on the plight of human rights defenders in the region. In the report “At what cost? Irresponsible Business and the Murder of Land and Environment Defenders 2017”, published in July 2018, the international organisation Global Witness stated that of the total of 201 murders of human rights defenders in the world in 2017, 60 percent happened in Latin America.
Brazil recorded the highest number of homicides of activists of any country, 57. In Mexico, the number was 15, five times more than the year before, while Nicaragua recorded the highest murder rate of activists relative to its population, with four killings, according to the British-based organisation.
The “Global Analysis 2018”, produced by the international organisation Front Line Defenders, also depicts a grim outlook, counting 321 human rights defenders killed in 27 countries, nine more than in 2017. Of that total, 77 percent involved defenders of the land, the environment and indigenous people.
In the Americas, the most common violations consisted of threats and smear campaigns, according to the Irish-based organisation. In Colombia, 126 activists were murdered; in Mexico, 48; in Guatemala, 26; in Brazil, 23; and in Honduras, eight.
For Ana María Rodríguez, a representative of the Colombian Commission of Jurists, difficult conditions persist in her country, where 20 human rights activists have been murdered so far in 2019.
“We still don’t have an effective response from the state” to guarantee the safety of human rights defenders, Rodríguez told IPS.
The most numerous victims are social organisers from areas once controlled by the Revolutionary Armed Forces of Colombia (FARC), a guerrilla group that is now a political party with representation in parliament, after signing a peace agreement with the government in 2016, ending half a century of armed conflict. 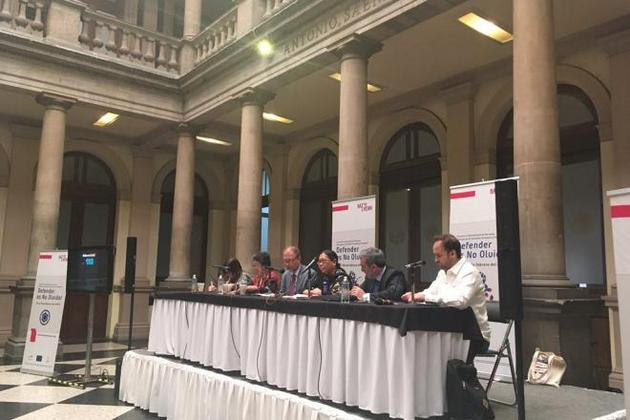 Special rapporteurs on different aspects of human rights take part in the Feb. 18 closing ceremony of the Latin American meeting of human rights defenders and journalists in Mexico City. Credit: Courtesy of CMDPDH
“There are delays and non-compliance with the peace agreement,” which have contributed to the defencelessness of human rights activists, according to the lawyer.
In Mexico, this year has already claimed a deadly quota, with at least six human rights defenders and three journalists killed.
Added to this record number are the ongoing crises in Nicaragua and Venezuela, the arrival in January of far-right President Jair Bolsonaro in Brazil, who has issued open threats against civil society, and statements by leftist President Andrés Manuel López Obrador, in office in Mexico since December, against civil society organisations and journalists who take a critical stance.

The rapporteurs present at the meeting, on unofficial visits to Mexico, listened to the accounts given by activists and recalled that governments in the region have international obligations to respect, such as guaranteeing the rights of indigenous people, displaced persons and journalists, as well as protecting human rights defenders.
“One of the basic rights is to prior consultation and obtaining free, prior and informed consent,” especially with respect to megaprojects, Tauli-Corpuz, UN special rapporteur on the rights of indigenous peoples, who belongs to the native Kankanaey Igorot people of the Philippines, told IPS.
In her October report on Mexico, the special rapporteur criticised the violation of rights of indigenous people, especially the right to prior consulation on energy, land or tourism projects in their territories.
López Obrador’s government plans to build a railway running through five states in the south and southeast of the country and to create an overland route linking the Pacific and Atlantic coasts that runs across native lands – projects that are opposed by affected communities.
For his part, Lanza, the IACHR special rapporteur, said the recommendations of the joint report released in June 2018 with David Kaye, UN special rapporteur on the promotion and protection of the right to freedom of opinion and expression, should be the starting point for the measures to be adopted by the Mexican government.
“The important thing is for the State to comply with the recommendations. We are following that up,” he told IPS. In March, his office will present its annual regional report on freedom of expression.
Jiménez-Damary highlighted that Colombia is the most critical case of forced internal displacement, with some 6.5 million victims as of 2017, while in Mexico some 345,000 people have had to leave their homes and in El Salvador, 296,000.
“One displaced person is already one too many. The state has the main responsibility” in such cases, the UN special rapporteur on the rights of internally displaced persons told IPS.