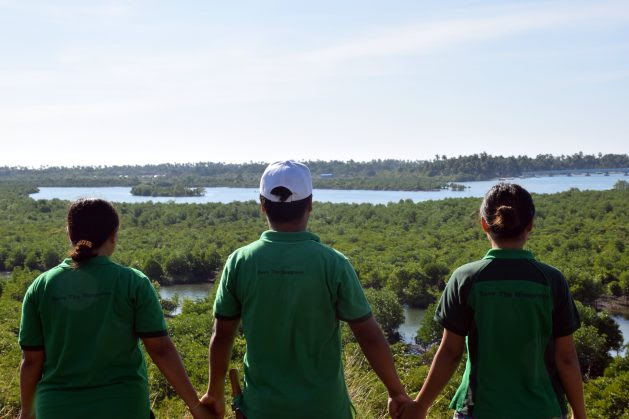 Young planters stand guard by mangrove forest in Shwe Thaung Yan sub township in Ayyerwady region of Myanmar. Credit: Stella Paul/IPS
SHWE THAUNG YAN, Myanmar, Jan 4 2019 (IPS) - Htay Aung is having a moment. The 63-year-old retired professor of Marine Science sits at the foot of a Buddha statue atop a hill on Shwe Thaung Yan sub township, in Myanmar’s Ayyerwady region, almost in meditation. Below him, a vast thicket of mangrove glistens in the gold of a setting sun. For Aung, this stretch of mangroves—known as the Thor Heyerdahl Climate Park—is a symbol of joy, hope and all things good.
“We gave three years of hard work in planting these trees. Now they are growing tall. Soon, they will be the biggest assets of our people,” he says, pointing at the forest and the tiny dot of houses that appear in the horizon. 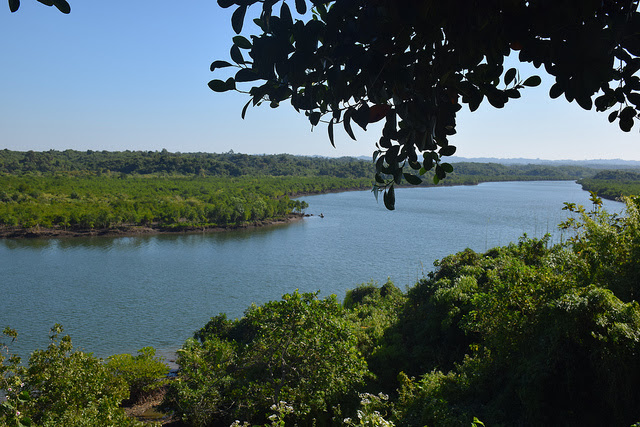 The restored mangrove forest in Shwe Thaung Yan sub township in Ayyerwady region of Myanmar. Credit: Stella Paul/IPS
Mangroves in Myanmar
This mangrove forest is spread across an area of 2,557 square kilometres (km)—almost the size of Luxembourg.

However, in most places, the density is wafer thin thanks to rampant clearing of the mangroves for space to breed shrimps and for firewood etc. According to a recent study by Pierre Taillerdat, Massimo Lupascu and Daniel Friess, Myanmar loses about 21 square km of its mangrove forest each year.
Shwe Thaung Yan, about 185 km north west of Yangon, once had a severely degraded forest where 75 percent of its mangroves had been destroyed.
Then the story changed.
In 2015, just before the rains came, a motley crowd of a few hundred men, women and youths from the fishing villages, wearing shinny plastic gumboots and carrying sling sacks filled with mangrove saplings, gathered along the muddy swamp in Myagi—one of the three villages under Shwe Thaung Yan.
For several hours a day, they planted the saplings in the muddy soil made fertile and nutrient rich by regular tides.
By October of that year, they had planted over 700,000 trees on three square km of land.
Since then, the plantation drive has taken place each year. By the end of October 2018, the community planted six million trees in three villages of under Shew Thaung Yan, covering 9 square km of land—an area over four times bigger than the city of Monaco.
Leading the planters from the front, besides Aung were Uboni and Aung Aung Myint, experts in mangrove research and costal ecosystems restoration. The three are currently associated with Worldview International Foundation (WIF)—a Norwegian charity co-founded by Arne Fjortoft, a former journalist turned politician and a renowned environmentalist.
“We used the satellite images, studied the images meticulously and created a map that shows the exact patches in the mangrove forest that had gone bare. We shared this information with the villagers. We also marked the areas and divided the planters in several groups and assigned each group a certain area,” Uboni tells IPS.
Before the plantation started, WIF entered into an active partnership with Myanmar’s Ministry of Environmental Conservation and two of the country’s leading educational institutions, Myeik and Pathein universities. The land area for planting mangroves—over 7 square km in all—was provided by Pathein University, which is also involved in studying marine science along the coast of Shwe Thaung Yan. 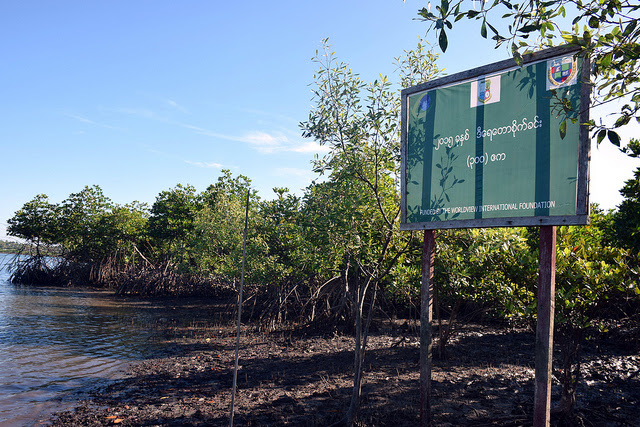 Worldview International Foundation (WIF) signboard by a mangrove forest in Shwe Thaung Yan sub township in Ayyerwady region of Myanmar. Credit: Stella Paul/IPS
Mitigating Climate Change
Mangroves make up only 0.7 percent of the world’s forests, but they have the potential to store about 2.5 times as much CO2 as humans produce globally each year. A 2017 study estimated that the total amount of carbon held in the world’s mangroves was around 4.2 billion tonnes. If this whole amount were released as CO2, it would be equivalent to the annual emissions of China and the United States put together.
Another study said that Myanmar’s mangroves — which is 3 percent of global mangrove forests, shows “huge (blue carbon) potential if conservation can prevent further emissions from their loss and encourage future carbon sequestration through restoration.” So, blue carbon mitigation at the national scale “is well aligned with the Paris Agreement and associated Nationally Determined Contributions (NDCs) for some nations,” the study says.
Cameron Keith Richards, professor at Southern Cross University, Australia, visited Thor Heyerdahl Climate Park in 2016 to evaluate the mangrove restoration and its blue carbon stock. In his validation report, which helped the project qualify for selling its carbon stocks, Richards summarised the project saying that it was “reasonably assumed to represent an overall 4.3 million tons of C02 within a 20-year lifecycle of the current trees and additional trees to be planted in the project.” 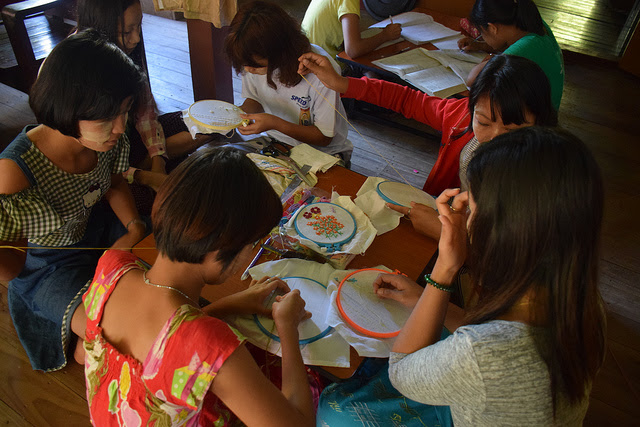 The mangrove project has opened ways for alternative livelihoods and skill-building opportunities for the community. Credit: Stella Paul/IPS
Community Development
Shew Thaung Yan is primarily a fishing sub township where catching and selling of fish remain the source of sustenance for its nearly 11,000-strong community.
However, the mangrove project has opened ways for alternative livelihoods and skill-building opportunities for the community: during the monsoon when there is little or no fishing in the sea, the community members earn wages by planting mangrove saplings in the forests around them.
Women of the village have also started a clam farming collective–a first for the community. The collective which presently has 55 members, is running from a site that was earlier used as a nursery for growing mangrove saplings. The women visit the mangrove forest where they collect clams and bring it back to the farm where each of them have a 6 to 10 ft enclosure that are regularly flooded by the tidal waves. The clams have been “sowed’ into the slushy farm soil, where they will thrive and grow fat, feeding on the nutrients brought by the tides.
This is a zero-investment livelihood initiative that promises local women a good earning opportunity, explains Shwe Sandar Oo, the coordinator of the farming project. “The land is free, the clams are free and we have already connected them to buyers,” she tells IPS. The buyers, she says, are hoteliers in Chaung Tha, a beach town popular among domestic and foreign tourists. Big, fleshy clams are high in demand among the tourists and usually fetch half a dollar each. 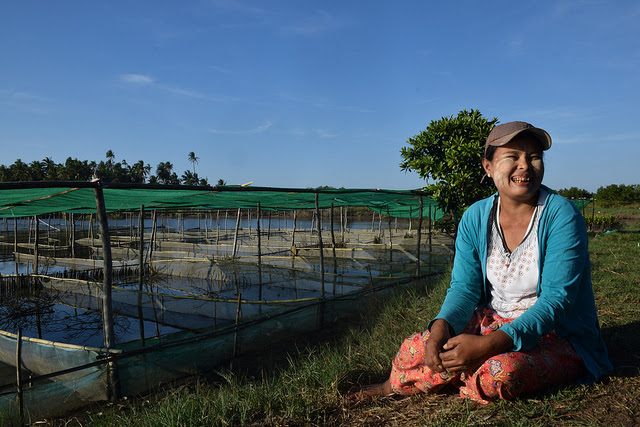 Clam farmer Thein Thein Sein is full of happiness as she looks upon her zero-investment clam farm in Myagi village of Shwe Thaung Yan sub township in Ayyerwady region of Myanmar. Credit: Stella Paul/IPS
Thein Thein Nwe, one of the clam farmers says that it’s the zero-investment that drew her to the collective. Earlier this year, Nwe’s eldest daughter dropped out of school at grade 10, after she failed to pass her grade 10 tests. With the income she earns from her clam farm, the 42-year-old fisherwoman now hopes to send her daughter to a private coach, so she could retake the tests.
Many in the village of Maygi have received clean cookstoves and solar lamps provided by WIF. The village has a media centre where school-going children of the village are learning various skills including basic computer operations, photography and embroidery. Run by WIF, the centre offers scholarship girl students who are promising but too poor to afford tuition fees.
Way to the Future
As 2019 begins, the planters in Shwe Thaung Yan are gearing up to plant two billion trees–their biggest plantation drive to date. Once finished, restoration drive of Shwe Thaung Yan would be complete and the restored forest would store 300 million tonnes of CO2, Uboni says. “After this, we are going to Yangon Division and also the delta division. So, in the new year, we will go to Bago and Mon state to plant mangrove,” he announces.
Aung, on the other hand, is more focused on the underwater marine life, especially conserving the seagrass and the coral bed both of which are available in the sea around Shwe Thaung Yan.
“The seagrass can stock much more blue carbon than the land trees or mangrove. It is also what feeds Dugong or sea cow—a critically endangered sea mammal. So, with the help of WIF and Pathein University, we now aim is to build a marine sanctuary around Shwe Thaung Yan,” he says.
The idea has received the approval of Daw Si Si Hla Bu, the rector of Pathein University. “I want to see our university making significant contribution to coastal ecosystem restoration,” Hla Bu tells IPS.
Arne Fjortoft tells IPS that the funding for the proposed marine sanctuary could be raised from selling off the carbon stock of mangrove forests. For Fjortoft, however, the mangrove restoration, vocational trainings, clam farming and marine life conservation are all part of a big, single picture: “The final goal here is to help bring sustainable development for 12 million people of the country’s coastal communities. And that’s the future we are hoping to see.”