Credit: Getty Images
NEW DELHI, Jan 23 2019 (IPS) - As I was attending the 24th Conference of Parties to the United Nations Framework Convention on Climate Change—to create a rulebook to operationalise the Paris Agreement—in Katowice, Poland, it dawned on me, like never before, that the negotiations were taking place in a make-believe world.
There was a stark disconnect between what is required to contain the impacts of climate change and what representatives of 197 parties were trying to achieve.
The world is reeling under the effects of climate disasters. From Kerala to California, extreme weather events are killing people, destroying properties and businesses.
Why is it that three years after the “historic” Paris Agreement was signed, the global collective effort is in tatters? The reason is the architecture of the Paris Agreement itself.

This, when the global temperature has only increased by 1.0°C from preindustrial levels. The Intergovernmental Panel on Climate Change’s Special Report on Global Warming of 1.5°C makes it clear that the impacts are going to be substantially higher at 1.5°C warming and catastrophic at 2.0°C.


The worst part is that most countries, including the US and the European Union, were not even on track to meet their meagre commitments to curb emissions.
So why is it that three years after the “historic” Paris Agreement was signed, the global collective effort is in tatters? The reason is the architecture of the Paris Agreement itself.
The Paris Agreement is a voluntary agreement in which countries are free to choose their own climate targets, called nationally determined contributions (NDCs). Developed countries and rich developing countries were expected to take higher emission reduction targets than poor developing countries.
But if a rich country doesn’t commit to a higher emissions cut, no one can demand a revision of targets. Worse, if a country fails to meet its NDCs, there is no penalty. The agreement, therefore, based on the goodwill of countries.
Herein lies the catch.
Since the beginning, climate negotiations have been viewed as an economic negotiation and not as an environmental negotiation. So, instead of cooperation, competition is the foundation of these negotiations. Worst still, the negotiations are viewed as a zero-sum game. 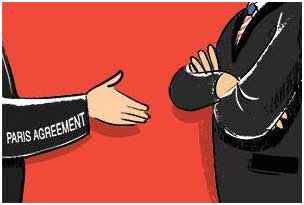 For instance, Donald Trump believes that reducing emissions will hurt the US economy and benefit China, so he has walked out of the Paris Agreement. China too believes in this viewpoint, and despite being the world’s largest polluter today, it has not yet committed to any absolute emissions cut.
The fact is every country is looking for its own narrow interest and not the larger interest of the whole world. They are, therefore, committing to as little climate targets as possible.
This is the Achilles heel of the Paris Agreement. This is the reason why the Paris Agreement will not be able meet its own goal of limiting global warming well below 2°C. The negotiations, however, are devoid of this realisation.
We need to understand that the interest of countries and the interest of the world are two sides of the same coin. Climate change demands countries cooperate and work together to reduce emissions.
But this can only happen if the climate change negotiations move from being a zero-sum game to a positive-sum game. Today, it is possible to make this changeover because reducing emissions and increasing economic growth are no more incompatible to each other.
Costs of technologies such as batteries, super-efficient appliances and smart grids are falling so rapidly that they are already competitive with fossil fuel technologies.
So the reason for countries to compete with each other for carbon budget is becoming immaterial. If countries cooperate, the cost of low and no-carbon technologies can be reduced at a much faster pace, which will benefit everyone.
The bottom line is negotiations cannot continue in a business-as-usual fashion. The time has come to devise new mechanisms for a meaningful international collaboration to fight climate change.
The link to the original article:
https://www.downtoearth.org.in/blog/climate-change/cop24-sum-and-substance-of-climate-diplomacy-62483