Bachelet herself was arrested along with her mother in 1975. She was a young member of the Socialist Party, and her time in a secret prison was an ordeal that she prefers not to talk about. 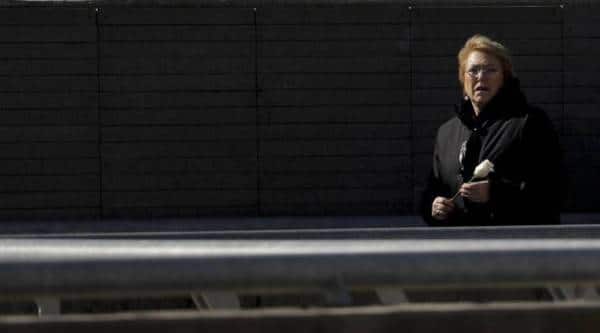 Bachelet rose through the ranks of the Socialist Party and became a key player in the center-left coalition that dominated Chile’s government for almost 20 years after Pinochet lost power. (AP photo)
Former Chilean President Michelle Bachelet was 23 years old when she was tortured and fled her country’s dictatorship into exile. Now, more than four decades later, she will face her past fighting such abuses worldwide as the new UN human rights chief.
Bachelet, 66, is often seen smiling, chatting easily or tossing unplanned comments or jokes into her speeches. But behind her good humor lie haunting memories of the brutal dictatorship that tore her family apart.

Chilean miner's message to Thai cave boys
Remember the miners trapped underground in Chile? One of them has sent a message to the Thai cave boys.
Her father, air force Gen. Alberto Bachelet, died in 1974 following months of torture in prison. Gen. Augusto Pinochet’s military had convicted him of being a traitor for opposing the 1973 military coup that ousted President Salvador Allende.
Bachelet herself was arrested along with her mother in 1975. She was a young member of the Socialist Party, and her time in a secret prison was an ordeal that she prefers not to talk about, saying only in her autobiography that she suffered “physical hardships.”
Using the family’s political connections, she went into exile in Australia and former East Germany. There she reunited with her then-partner, Jaime Lopez.
At age 25, Lopez became one of the leaders of the Socialist Party that had seen many of its members tortured, killed or forcibly disappeared by Chile’s military dictatorship. He returned to Chile, but only briefly because he feared he would be captured by Pinochet’s agents.
Back in Europe, Bachelet reminded him of the importance of committing to the cause and her father’s sacrifice, according to “Bachelet. The Unofficial Story,” by Javier Ortega and Andrea Insunza.
“My dad died because he was consistent. I expect nothing less from you,” the book says Bachelet told her then-boyfriend.
When he followed her advice, Lopez was captured in Chile. Under torture, he gave Pinochet’s secret police information on other members of the Socialist Party, before he became one of the about 1,000 people who were forcibly disappeared during the dictatorship.
Her father’s death and her boyfriend’s disappearance marked Bachelet’s character. Despite this, she never held grudges – not even against the Chilean military, said Giorgio Agostini, a sociologist who has long-known Bachelet and has written about her life.
Bachelet returned to Chile in 1979 when she felt she could do so safely. She studied medicine, specializing in pediatrics, and began working at an organization that helped children with mental health problems whose parents had been victims of the 1973-90 dictatorship.
Bachelet rose through the ranks of the Socialist Party and became a key player in the center-left coalition that dominated Chile’s government for almost 20 years after Pinochet lost power.
Putting her traumatic past behind, she helped the discredited military regain its status in the wake of Pinochet’s dictatorship.
One of her emblematic moments came when she was named Latin America’s first woman defense minister during the government of President Ricardo Lagos. She continued to break boundaries when she became Chile’s first women president in 2006.
After her term, she was named the first head of UN Women, the world body’s new women’s agency. She left the post to return to Chile and won the presidency again, serving from 2014-18.
Bachelet is known as a caring single mother, a hard worker and an astute negotiator.
In her new post as the UN High Commissioner for Human Rights, she replaces Zeid Ra’ad Al-Hussein, a diplomat and member of Jordan’s royal family.
Diplomats from the UN’s 193-member states burst into applause in July when the General Assembly president gave official approval to Secretary-General Antonio Guterres’ selection of Bachelet.
But in Chile, some human rights groups criticize her record, saying that as president she failed to close a special prison for dictatorship-era criminals that provided them with comforts they wouldn’t enjoy in regular confinement.
Guterres has said that Bachelet is taking office “at a time of grave consequence for human rights.” “Hatred and inequality are on the rise,” he said.
“Respect for international humanitarian and human rights law is on the decline. Space for civil society is shrinking. Press freedoms are under pressure.” On Monday, Bachelet’s third day in her new job, a Myanmar court sentenced two journalists from Reuters news agency to seven years in prison on charges of illegal possession of official documents.
The ruling was met with international condemnation that will add to outrage over the military’s human rights abuses against Rohingya Muslims.
“On several issues related to different parts of the world,” Bachelet told reporters in Geneva on Monday, “I need to gather more information and make a deep analysis. But I have to mention how shocked I am after finding out about their seven-year prison sentences.”

'Face to face with my IS captors'
13m

"It's my decision" - A woman in Saudi Arabia

Women without rights in Kosovo