Ending ‘the war against business’

Ending ‘the war against business’

Today, senior Trump Administration officials hosted a White House Economic Summit for an audience of America’s small business owners. A lot has changed under President Donald J. Trump’s economic policies, and today’s summit offered an important reminder of the positive effects those policies have had on America’s job creators.
The U.S. economy is booming and confidence is soaring. Between the President’s strong regulatory reform agenda, the Tax Cuts and Jobs Act, and investment in America’s workforce, a sluggish economy has been revived. In fact, according to CNBC, 54 percent of Americans now rate the economy as good or excellent—the highest ever recorded.
Small business optimism is on the rise as well, hitting a 35-year high, according to the National Federation of Independent Business. And the confidence job creators have in this economy has translated into higher pay for America’s workers. In the past year, U.S. workers saw the largest pay increase in nearly a decade, the Bureau of Economic Analysis reports.
With the economy booming and America open for business, the evidence is clear: President Trump’s policies will continue to drive true American prosperity. “We have had better growth, we have had tremendous job creation, lower unemployment across the board,” Director of the National Economic Council Larry Kudlow said today.
Watch Larry Kudlow: President Trump will “end the war against business”

While in New York for the 73rd Session of the United Nations General Assembly (UNGA), Advisor to the President Ivanka Trump took some time to focus on a message central to her work in the White House: economic empowerment for women across the globe.
“We know that investing in women is a priority in terms of our global security, in terms global prosperity, in terms of global peace. We also know that women around the world are one of the greatest under-tapped resources. When you invest in women, they invest back into their communities, they can invest back into their families, they invest in things that have a generational impact on their societies,” Ms. Trump said.
“At #UNGA 2018, I had the honor of joining @WorldBank @JimYongKim, @ConcordiaSummit + global leaders for impactful discussions on #WomensEconomicEmpowerment in furtherance of @POTUS’s National Security Strategy, as we strive for peace, prosperity & stability at home & abroad,” she tweeted.
Watch Ivanka Trump talk women's economic empowerment at UNGA 2018
More: President Trump returns to the U.N.—with a pile of diplomatic successes 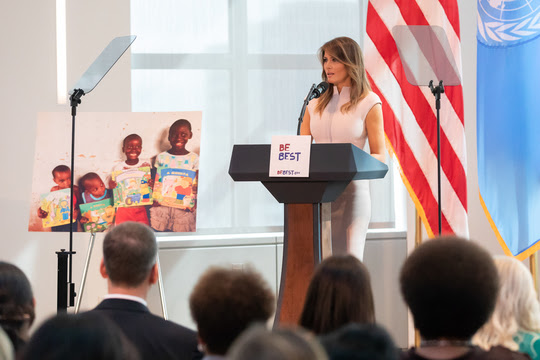