U.S. says 463 migrant parents may have been deported without kids | The Indian Express

U.S. says 463 migrant parents may have been deported without kids | The Indian Express

U.S. says 463 migrant parents may have been deported without kids

The absence of the 463 parents, which U.S. government lawyers said was "under review," could impede government efforts to reunite separated families by Thursday, the deadline ordered by a federal judge. 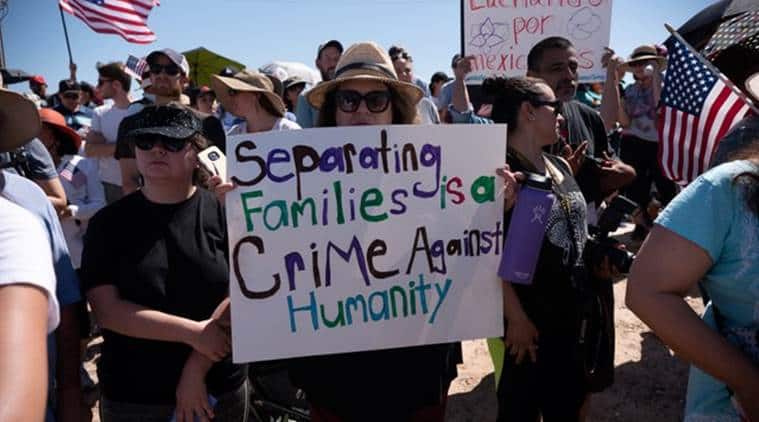 People participated in a protest against a recent U.S. immigration policy of separating children from their families when they enter the United States as undocumented immigrants. (REUTERS/Monica Lozano)
More than 450 immigrant parents who were separated from their children when they entered the United States illegally are no longer in the country though their children remain behind, according to a joint court filing on Monday by the federal government and the American Civil Liberties Union.
The absence of the 463 parents, which U.S. government lawyers said was “under review,” could impede government efforts to reunite separated families by Thursday, the deadline ordered by a federal judge. The filing did not say why the 463 parents had left the country, but government officials previously acknowledged that some parents had been deported without their children.
1m 34s

1,500 immigrant children gone missing in the US
The federal government has lost track of 1,500 unaccompanied immigrant children after placing them in the homes of sponsors, sparking demands for action online.
As of Monday, 879 parents had been reunited with their children, according to the filing. About 2,500 children were separated from their parents after the Trump administration announced a “zero tolerance” policy in April aimed at discouraging illegal immigration. The policy was ended in June amid an international outcry about the government’s treatment of immigrant children.
U.S. District Judge Dana Sabraw in San Diego ordered last month that the government had to reunite the children with their parents in a case brought by the ACLU.
On Monday, the government also said 917 parents were either not eligible to be reunited or not yet known to be eligible to be reunited with their child. That number includes parents no longer in the country as well as those deemed unsuitable because of criminal convictions or for other reasons.Immigration advocates have expressed alarm about parents deported without their children, saying it can create problems with the children’s immigration cases.
“How can we go forward on a case if we don’t know the parent’s wishes?” Megan McKenna, spokeswoman for Kids in Need of Defense, told Reuters earlier this month.
While Monday’s report indicated progress with reunifications, the ACLU made clear its frustrations with the process. The rights group said it did not have a list of parents who signed a form electing to be deported without their child. “These parents urgently need consultations with lawyers, so that they do not mistakenly strand their children in the United States,” the ACLU wrote in the court filing.
The ACLU asked Sabraw to order the government to turn the information over by the end of Tuesday. The government said it had cleared an additional 538 parents for reunification pending transport.
For all the latest World News, download Indian Express App
Publicado por salud equitativa en 6:57