The Syrian government denounced the evacuation as a "criminal process" that "smuggled terrorists" whom it blamed for undermining the country's security for years. 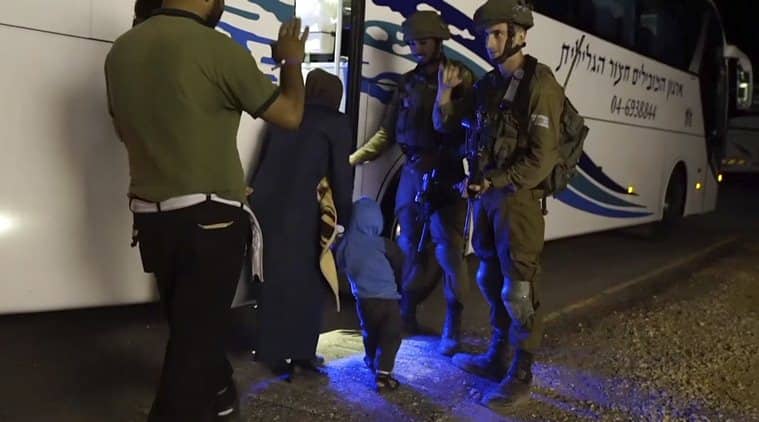 This image made from video released by the Israeli Defence Forces on Sunday, July 22, 2018 shows a member of the White Helmets waving to Israeli soldiers as he and his family board a bus to Jordan. (Israeli Defence Forces via AP)
The call came on Saturday night. In the raging war zone that is southwestern Syria, with enemy forces on the march, the 98 White Helmets volunteers brought their spouses, children and a personal bag each. A total of 421 people massed at two collection points where they were to make their crossing to safety.
By the time they crossed, they were 422. One woman went into labour, requiring an emergency C-section. Her son, Nairouz, came into the world in an open field under the darkness of night just short of the frontier with the Israeli-occupied Golan Heights.
This is a modal window.

Syrian "White Helmets" evacuated to Jordan
about 800 members of Syria's White Helmets civil defense group and their families were evacuated via Israel to Jordan on Sunday.
It was just one moment of drama in a complicated international rescue operation to extract the Syrian volunteer rescuers who work in opposition areas through their country’s bitter enemy Israel by bus to a temporary haven in Jordan.
Read: Hundreds of Syrian ‘White Helmets’ evacuated by Israel to Jordan, say reports
It was a nail-biting trip to a crossing over one of the most tightly sealed frontiers in the world. Up until the last minute, those on the ground were uncertain the operation would go through.
Another nearly 400 people were meant to be pulled out as well. Most didn’t make it in time to the assembly points, unable to go through roads that were closing fast by the advancing Syrian forces on one side and the expanding Islamic State militants on the other.
In all, it took about six hours to complete the evacuation, according to a person close to the operation who agreed to discuss the details on condition of anonymity because of the sensitivity of the issue.
“It was a ‘Hail Mary’ operation,” said the person familiar with the evacuation. “The only place of safety was through their evacuation to Jordan.”
The operation was conceived by Britain, Germany and Canada and supported by Israel, Jordan, the United States, and the UN. It took an unprecedented level of agreement and coordination — something international players have rarely demonstrated during eight years of war in Syria that have pitted world powers against one another.
The rescue of the besieged White Helmets was not without controversy. It raised questions about the fate of 3,000 other White Helmets still operating in opposition-held northern Syria, living with other 1 million other displaced civilians in areas where the government is expected to target next.
The Syrian government denounced the evacuation as a “criminal process” that “smuggled terrorists” whom it blamed for undermining the country’s security for years. A Syrian Foreign Ministry official repeated his government’s accusations that the White Helmets staged and executed chemical attacks to blame Damascus.
Also read: US, allies set to evacuate Syrian aid workers from southwest
The White Helmets is an organization of volunteers that since 2013 took on the task of rescuing the survivors and salvaging the dead in war-ravaged held areas, whether digging them from under the rubble of bombed buildings or pulling victims of chemical attacks from site. It has had Western backing and funding, and its work brought it a Nobel Prize nomination. The government waged a virulent campaign depicting them as agents and terrorists because its volunteers helped document atrocities by government forces and their allies.
In five years of operations, over 3,000 volunteers saved more than 115,000 lives, according to the White Helmets. The cost for the group has been high, with one in four of its volunteers wounded or killed.
The plan was conceived in Europe and Canada about two weeks ago.
The Syrian government offensive in the southwest, backed by Russia, unfolded in mid-June. Though it condemned the assault, Washington, which along with Jordan had backed armed groups in the area and sponsored the White Helmets, signalled it wouldn’t help stop the advances.
By early July, government forces began negotiating surrender deals with armed groups and civilians in villages and towns that were fast crumbling under the assault. The negotiations allowed those who refused to live under government control — whether armed fighters, civilians or activists — to evacuate to the north. Except for the White Helmets, said the person close to the planning.
Government officials and Russian representatives said the White Helmets were “a red line” who should be “eradicated”, the source said.
This threat was particularly acute, he said, because during previous evacuations from fallen opposition areas elsewhere, nearly a dozen White Helmets volunteers were specifically targeted, pulled from buses, tortured and filmed making false confessions about being paid agents. They were even filmed with weapons to support the government’s narrative they work closely with the armed groups.
“It was a pattern of behaviour,” he said.
The discussions about the White Helmets’ safety started between Britain, Germany and Canada before the NATO summit on July 9. At the summit, there were leader-to-leader meetings over the issue. 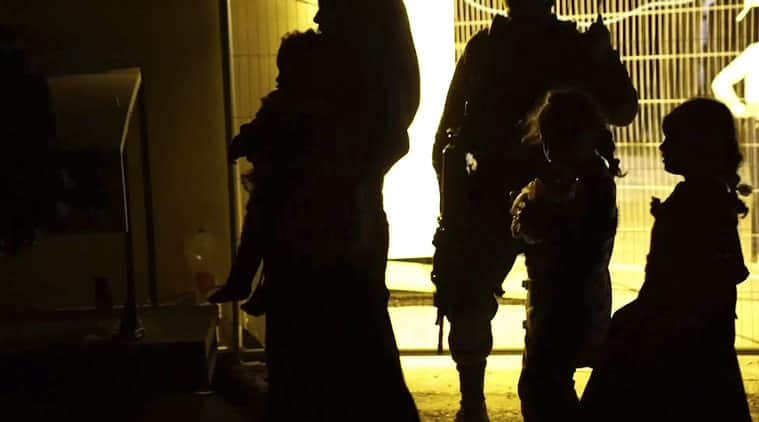 The 98 White Helmets were told to bring spouses, children and a few belongings to two collection points. Fabled rescuers themselves now in need of rescue, they embarked on a hair-raising journey through Israel enroute to reluctant haven in Jordan, a country already burdened with multitudes of refugees. (Israeli Defence Forces via AP)
Evacuating them through Jordan quickly became impossible as government forces advanced, seizing a vital border crossing from the rebels and then deploying along the border. Israeli Prime Minister Benjamin Netanyahu said he agreed to let them cross through Israel, after an appeal from US President Donald Trump and Canadian Prime Minister Justin Trudeau.
Finding where the volunteers were in the fast-changing battlefield was a challenge. Conscious not to raise expectations, the planners only asked the volunteers whether they would accept an opportunity to evacuate through Israel.
Some declined, the source said, fearing they had no guarantees where they would end up. The leadership of the White Helmets was unanimous in accepting, despite the likelihood the government would point to the Israel route in propaganda against them.
“The political ramification had to be secondary to saving what is to be saved,” the source said.
There was an unexpected twist: Advances by an affiliate of the Islamic State group. As rebel forces retreated and surrendered in many villages between Daraa and Quneitra provinces, it was the IS affiliate — not government forces — that moved in.
This changed the landscape again, blocking some escape routes to the evacuation points.
One civil defense volunteer said before Saturday night that many of his colleagues were locked in areas seized by the government and the militants.
“In our minds, there were no guarantees this evacuation was going to happen until it happened,” the source said.
The small window was quickly closing. On the night of July 21, the call came. The evacuees congregated at two points in the northern end of the frontier. Again, there was a problem.
A wife of one volunteer went into labour as the call was issued. “We were worried she won’t make it,” the source said.
An emergency C-section was performed on the Syrian side in a field near the frontier. “In a couple of hours, she was evacuated to the other side with a healthy baby boy Nairouz.”
The evacuees crossed on foot and were received on the other side by Israeli soldiers, who verified their identities and took them in buses to one of the two crossings into Jordan.
“The rescuers were rescued,” the source said.
Germany, Canada and Britain said they will resettle the White Helmets and their families within three months. The US and Jordan will not take any in.
The planners are still in touch with the volunteers who didn’t make it out, advising them on what to do and where to be safe.
It is unclear if a similar operation can be reproduced. As for the hundred other volunteers in northern Syria, the source said the geography and landscape are different, with Turkish forces present in the area and far more options than the southwest, with firmly sealed frontiers from all sides.
In a statement Monday night, the White Helmets thanked “all governments who contributed” to the evacuation and asked the international community — if it won’t act to end Syrian offensives — to “do more to help the hundreds of thousands remaining in southern Syria”.
But the international players appear unlikely to pull together that will again.
“A great many factors and partners had to interact in the right way,” German Foreign Ministry spokesman Christofer Burger said.
Pressed whether the action set a precedent for further world help in evacuations, he said: “The factors that made it possible in this case to help in this way people who faced an acute threat, a very specific group, cannot be reproduced at will.”
For all the latest World News, download Indian Express App
Publicado por salud equitativa en 6:59