Mamata Banerjee: ‘With NRC they’re trying to divide people, there’ll be bloodbath and civil war in country’ | The Indian Express

Mamata Banerjee: ‘With NRC they’re trying to divide people, there’ll be bloodbath and civil war in country’ | The Indian Express 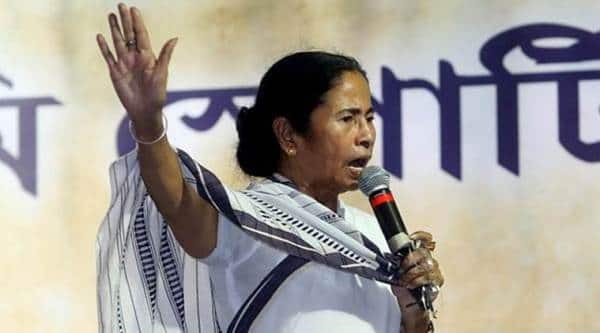 West Bengal Chief Minister Mamata Banerjee slammed the Centre for their ‘divide and rule’ politics over the draft NRC list published on July 30, 2018. (File)
A day after the much-anticipated final draft of Assam’s National Register of Citizens (NRC) was published, West Bengal Chief Minister Mamata Banerjee expressed dismay at the fact that even former president of India Fakhruddin Ali Ahmed’s family members’ names did not find mention on the list. Speaking at the Catholic Bishops’ Conference of India event in the national capital today, the chief minister said, “I am surprised to see that the names of our former President Fakhruddin Ali Ahmed’s family members are not on the NRC Assam list. What else can I say? There are so many people whose names are not there.”
Slamming the BJP-led government at the Centre, Banerjee accused the party of resorting to ‘divide and rule’ politics in the country. “They’re trying to divide people, there will be bloodbath and civil war in the country,” she said, adding that “more than 40 lakhs people voted yesterday for the ruling party and suddenly today they have been made refugees in their own country.” Also Read: Assam NRC becomes latest flashpoint between govt and Opposition: What has happened so far
The publication of the final draft of Assam’s NRC sparked a political slugfest as 40 lakh people found their names excluded from the list. Of the 3.29 crore people who had filled their applications for the NRC, 2.89 crore found their names in the draft list. Even as a sense of uneasiness swept through Assam, the government clarified that for no person a ‘reference’ would be sent to the Foreigners Tribunals nor would anyone be sent to detention camps. Also Read: Those excluded from NRC final draft are illegal immigrants, says Amit Shah
Laying emphasis on the unity and diversity of India, the West Bengal CM said that “India needs change and that change must happen in 2019.” “What happened in Jharkhand can happen in Bihar or Uttarakhand but it will not happen in Bengal because we are there, not in Andhra Pradesh because Chandrababu Naidu is there, not in Karnataka because Kumaraswamyji is there,” she added. Also Read: No coercive action against those whose names are not in Assam NRC: SC to Centre
Hitting out at the Centre’s discriminatory politics, Mamata was quoted by ANI as saying, “If Bengalis say Biharis can’t stay in Bengal, South Indian people say North Indians can’t stay there and North Indians say South Indians can’t stay here. What will be state of this country?”Meanwhile, the Supreme Court today said the publication of the complete draft NRC of Assam cannot be the basis of any coercive action against anyone since it is merely a draft. It also directed the Centre to formulate standard operating procedure (SOP) to deal with claims and objections.The apex court directed the Centre to place the SOP before it for approval and said it should be fair and giving reasonable opportunity to contest exclusion.
Publicado por salud equitativa en 7:34