"It is my request that he (Modi) should grab the opportunity and respond positively to the offer of friendship by Imran Khan," Mehbooba Mufti said. 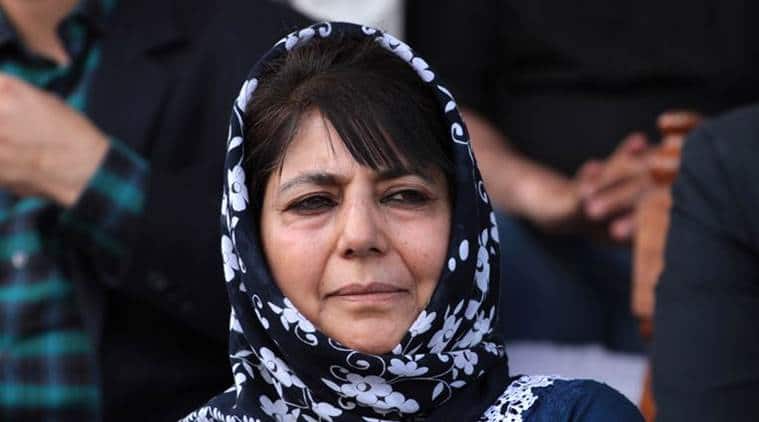 “I appeal to all parties — both from mainstream and the separatists — to set aside differences and come together to defend Article 35A, which is a major challenge,” Mufti added. (Express photo/Shuaib Masoodi)
Former Jammu and Kashmir chief minister Mehbooba Mufti on Saturday appealed to Prime Minister Narendra Modi to accept Pakistan Tehreek-i-Insaf chief Imran Khan’s “hand of friendship” and his offer to settle the decades-long Kashmir dispute through dialogue.
While addressing a rally in Srinagar to mark the 19th foundation day of Peoples Democratic Party (PDP), Mufti said, “I appeal to Prime Minister Narendra Modi. A new government will be formed in Pakistan and there will be a new prime minister, who has extended a hand of friendship towards India. He (Khan) spoke of dialogue. He (Modi) should respond to it positively.”
“It is my request that he (Modi) should grab the opportunity and respond positively to the offer of friendship by Imran Khan,” she added.
In his first press conference after declaring victory in the Pakistan elections, PTI chief Imran Khan had said, “If they take one step towards us, we will take two, but at least need a start. Kashmiris are suffering for long. We have to solve Kashmir issue by sitting across the table. If India’s leadership is willing then the both of us can solve this issue through dialogue. It will be good for the subcontinent also.”
Read more: Imran Khan: I am one of those Pakistanis who want good relations with India
While referring to former prime minister Atal Bihari Vajpayee’s efforts of maintaining peace with Pakistan, Mufti said, “Elections come and go. (Then Prime Minister) A B Vajpayee extended a hand of friendship to Pakistan and also entered a ceasefire on the borders. This is statesmanship, such leaders do not think about elections but about the people. Jammu and Kashmir is the biggest challenge for the PMs of our country.”
The former CM said that the prime minister who succeeds in resolving the issues and ending bloodshed in the state will have his name written in “golden letters” in the history. “The PM who resolves the Jammu and Kashmir issue within the ambit of humanity, ends bloodshed in the state and improves relations with Pakistan, his name will be written in golden letters in the history,” she said.
The PDP leader also said that during her term as CM, she called on the prime minister to discuss with him the need to hold talks with the neighbouring country as well as the people of the state. She added that the Hurriyat leaders, who were arrested by the National Investigation Agency on Eid, must be released if the Centre wished to hold peaceful dialogue with the separatists.
Also read: Decoding the next Pakistan Prime Minister
On the civilian deaths during her tenure as CM, Mufti said, “There was nothing in my hands. What was in my hands I did. We got the Centre to announce a ceasefire and the killings stopped.”
On the challenge to special status to Jammu and Kashmir, the former CM said that while her party succeeded in getting the BJP to make a commitment that “Article 370 will not be touched”, there was a need for all parties to unite to protect it. “There was challenge to Article 35A. It was because of our efforts that the Attorney General told the Supreme Court to defer the hearing on the case as the Centre had appointed a special representative for holding dialogue in Jammu and Kashmir,” she said.
“I appeal to all parties — both from mainstream and the separatists — to set aside differences and come together to defend Article 35A, which is a major challenge,” she added.
Mufti also alleged that she, as CM, was not allowed to work peacefully. “There has not been a day since 8 July 2016 that we were allowed to work peacefully,” Mufti said, adding, “The last two years have been a headache for me as there was always some issue or the other to deal with.”
(With PTI inputs)
For all the latest India News, download Indian Express App
Publicado por salud equitativa en 8:31