A resurgence that’s defying the critics

A resurgence that’s defying the critics

When President Trump took office, 1.5 million fewer prime-age Americans were working than eight years earlier. Almost 200,000 manufacturing jobs had been lost under the previous administration. The left’s response to President Trump’s call to “Build American” was clear: Manufacturing jobs are obsolete. They’re not coming back.
As for a growing economy, former Treasury Secretary Larry Summers spoke for many Democrats when he said that 3 percent annual growth was “fair enough if you believe in tooth-fairies.”
Flash-forward to Friday. “I am thrilled to announce that, in the second quarter of this year, the United States economy grew at the amazing rate of 4.1 percent,” the President announced from the South Lawn. Real GDP is on track for better than 3 percent growth for the first time since 2005.
To put that in perspective, during the entire period from 2001 to 2016, the annualized rate of real GDP growth in the first half of the year averaged just 1.9 percent. For every percentage point we go up, the result is roughly $3 trillion and 10 million jobs.
Get the facts: The Trump economy is growing to new heights
Council of Economic Advisers: An economy firing on all cylinders

Italy is an important ally: a member of NATO, a crucial partner in Afghanistan and Iraq, and a key part of bringing stability to the Mediterranean. Today, President Trump and Italian Prime Minister Conte will meet in Washington, looking to deepen cooperation and promote economic prosperity on both sides of the Atlantic.
Today’s meeting comes on the heels of last week’s major announcement on European trade. Alongside European Commission President Jean-Claude Juncker, President Trump outlined the four principles both sides have agreed will mark a new era in U.S.–European trade:

2. Making it easier for the European Union to purchase liquefied natural gas 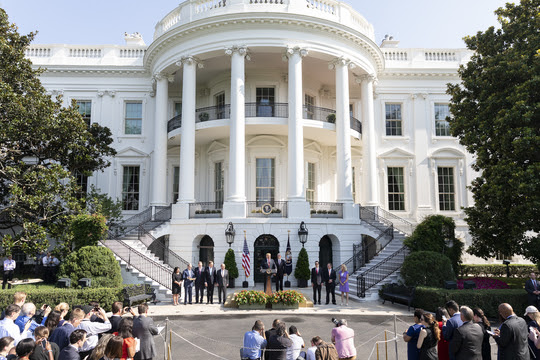