As many as 2,551 children, five and older are being considered for family reunification, though the administration deems more than 900 "either not eligible, or not yet known to be eligible, for reunification." 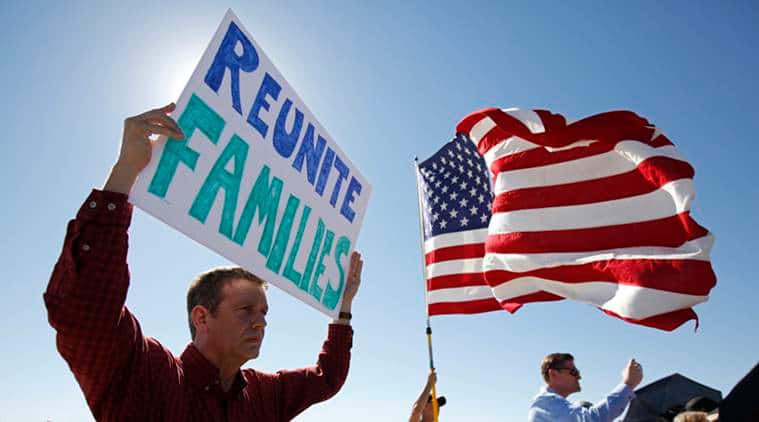 A federal judge praised the administration’s recent efforts to reunite as many people as possible before his court-imposed deadline of Thursday, calling it “a remarkable achievement.” (File photo)
A federal judge on Tuesday criticized the Trump administration’s accounting of hundreds of parents who may have been deported after being separated from their children at the US-Mexico border, calling it “a deeply troubling reality.”
US Dana Sabraw was responding to a government court filing that said 463 parents may not be in the United States. The government said those findings are based on case notes and are under review, signaling the number could change.
This is a modal window.

Thousands protest Trump as U.S. president meets Queen, PM May
Tens of thousands of anti-Trump protesters have brought London's capital to a virtual standstill as the U.S. president has tea with the Queen during his first official visit to Britain.
“It’s the reality of a policy that was in place that resulted in large numbers of families being separated without forethought as to reunification and keeping track of people, and that’s the fallout we’re seeing,” he said in a court.
The comments were in line with his long-standing criticism of the government’s “zero-tolerance” policy on illegal entry for causing many families to be separated. He also praised the administration’s recent efforts to reunite as many people as possible before his court-imposed deadline of Thursday, calling it “a remarkable achievement.”
As many as 2,551 children, five and older are being considered for family reunification, though the administration deems more than 900 “either not eligible, or not yet known to be eligible, for reunification.”
There have been 1,187 children reunified with their parents or “other appropriate discharges,” which include guardians and sponsors, according to a government filing.
Tuesday’s hearing, the seventh in the case this month, came after negotiations broke down between the government and the American Civil Liberties Union on how much time parents should have to decide whether to seek asylum after they are reunited with their children. The impasse kept a temporary halt on deporting reunified families in place at least until a hearing on Friday.
According to a government filing in federal court on Tuesday, the administration proposed a four-day waiting period, three days shorter than the ACLU proposed. ACLU attorney Lee Gelernt disputed that account and said more details would be offered in a court filing Wednesday.
The Justice Department’s longer waiting period would increase costs and occupy limited beds, David Jennings, an official at US Immigration and Customs Enforcement, said in a declaration filed with the court. It costs $319 a day to detain a family member, and there are about 2,500 to 2,700 beds nationwide to house families.
The ACLU argues that parents need at least a week to discuss whether to seek asylum with their children, lawyers and advocates.
“Things are really a mess on the ground and we absolutely need seven days,” Gelernt said.
Justice Department attorney Scott Stewart disputed Gelernt’s remarks that reunifications were “a mess.”
The two sides appeared close to an agreement on Monday when they jointly requested a 24-hour extension to iron out differences.
For all the latest World News, download Indian Express App
Publicado por salud equitativa en 6:33